Following the traces of wolves

Volunteers from around the globe come to Slovakia every year to help map the population of wolves. 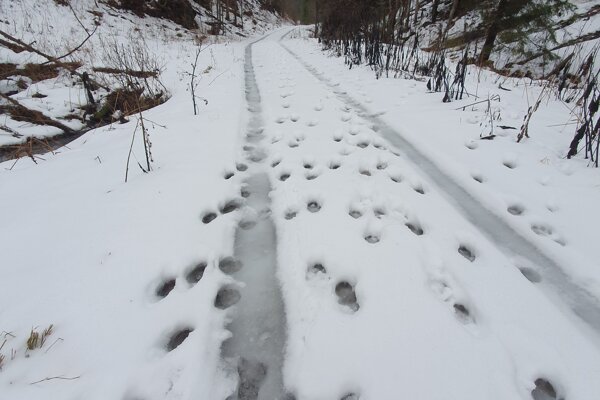 -Why he started monitoring of wolves in Slovakia

-Why volunteers arrive to track wolves in Slovakia

-photos from the latest edition of the White Wilderness project

Absorbed in conversation, I suddenly realised that the tracks in the snow I had carelessly stepped on were of wolves. There were plenty of them. I imagined a pack of wolves gracefully, with waving tails, running down the valley. They were sniffing deer tracks and going to the edge of the road to mark their territory with urine.

We were walking down one of the side valleys of Ľubochnianska Dolina valley in the Veľká Fatra mountains. When I spotted the tracks, we were just approaching the end of the route along which we were looking for, and found and counted, traces of wolves and lynxes in the wet snow, as well as their potential prey.

In Slovakia, wolves mainly inhabit mountain areas and prefer those with sufficient potential prey, low persecution rate and with places suitable for the creation of breeding dens. For most of the year, wolves form packs with a solid social structure and many communication signals. The pack is usually comprised of the parent pair, the so-called alpha pair, their youngest offspring and the offspring of the previous year. Wolves have very developed social behaviour. They feed mainly on ungulates but they also eat carcasses and smaller animals. Wolves are mating in January-February, the gestation period lasts 62–64 days and the number of pups is most often between four and eight. They sexually mature at the age of two to three years and in the wild they can live up to about 12 years.

“This is definitely the pack of the seven wolves the foresters told us about,” said Viera Štupáková said enthusiastically, a volunteer participating in the regular winter monitoring of wolves and lynxes in the Liptov region, called White Wilderness. “Look, they ran down from up there and here they took the forest road down the valley. And here they were joined by another three wolves.”

Robin Rigg, a British zoologist behind the project, first examined the wolf tracks carefully before he assented. Fortunately, the individual mates of the pack did not run one after the other, but side by side. The traces of their left and right legs were almost in line, forming a narrow trail. He counted seven of them altogether.

“This finding will help us map this pack and the territory it operates on,” said Rigg.

He measured one of the tracks with a plastic ruler and photographed it. Meanwhile, Štupáková took snow from the place where one of the wolves marked their territory with urine and put it in a prepared container. It will later be sent for genetic analysis. Then they recorded the GPS coordinates of the location and wrote them on paper. In the evening they will enter them in a computer with the photos. Along with other signs of occurrence on this transect, such as tracks in the snow, the remains of caught prey and scats, they will accurately map the occurrence of the grey wolf in Liptov.

Following wolves from the UK to Slovakia

Rigg comes from the UK, where the wolf was exterminated as early as the 18th century. Slovak wolves enchanted him in 1996 when he was invited to volunteer in a summer camp in eastern Slovakia. Rigg, together with 11 other Britons, spent two weeks here. He became so interested in the wolf and its coexistence with humans that he quit his job in Scotland and returned to Slovakia that very autumn as a volunteer. 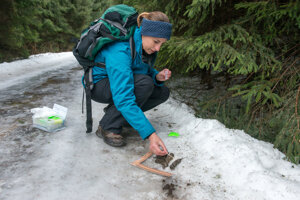 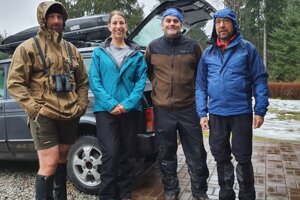 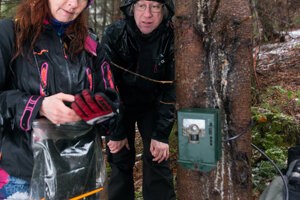 He settled here and since then he has been devoted to wolves and wildlife in Slovakia. His interest in wolves was first sparked by its intelligence and the myths surrounding the animal.