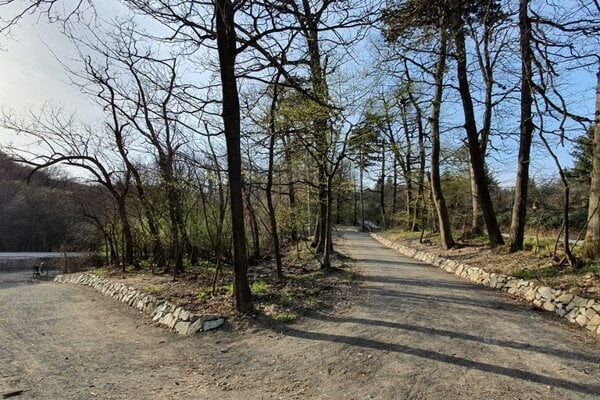 To read and see in this article:

- photos and the map of the renewed road

- to what purposes preserved cellars might serve in the future

Bratislava is one of the greenest cities in the world. This is thanks to its location on the foothills of the Small Carpathians and on the banks of the Danube River. But while citizens and visitors of Bratislava have plenty of opportunities where to spend free time in forests and on meadows without actually leaving the city, there is still room for improvements. A recent one is a new field path running in parallel with busy Pekná Cesta Street up to the recreation Pod Horárňou area in the Krasňany borough.

“It’s not very long and at its end also quite steep, but it is a nice change compared with the asphalt route,” said Johana Nováková while pushing her bike up its final stretch.

In the past, getting to the popular recreation area next to Pekná Cesta Road was difficult, especially during the weekend. On the narrow asphalt road, pedestrians, families with small children and prams, cyclists and cars were pressed close together. The new road, which disconnects from Pekná Cesta approximately 1.4 km from its beginning, allows pedestrians and cyclists to get to the Pod Horárňou area more safely.