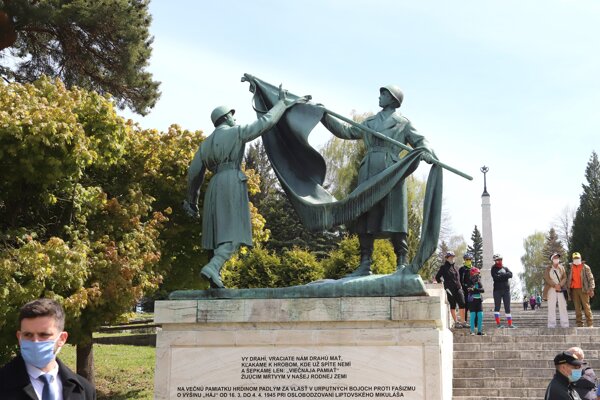 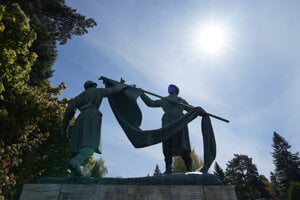 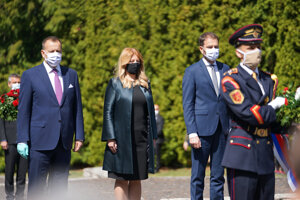 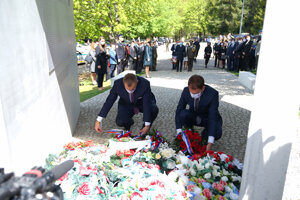 “I would like to express my honour to everybody who contributed to this fight and offered the highest sacrifice, their life,” President Zuzana Čaputová said at Háj-Nicovô memorial in Liptovský Mikuláš (Žilina Region), where nearly 1,400 Czechoslovak soldiers are buried.

She also paid her respects to soldiers from other countries who died in the war, including those from Russia, the UK, France and the US.

PM Igor Matovič (OĽaNO) reminded of the events that preceded the war and the devastating impact Adolph Hitler's accusations against people whom he considered the main reason for the world struggling with economic problems had.

“This is a symbolic place reminding us that we were able to win over this inhumanity,” Matovič continued, as quoted by the TASR newswire. “We managed to win because we joined our forces.”

Speaker of Parliament Boris Kollár (Sme Rodina) added that Slovakia belonged among the winners thanks to the Slovak National Uprising.

“We need to educate, with these gestures and symbols, our youth and our children,” he stressed, as quoted by TASR. “We can’t deform history. We need to remember it.”

Čaputová, Matovič and Kollár laid wreaths not only at the memorial in Liptovský Mikuláš, but also at Slavín in Bratislava.

Foreign Affairs Minister Ivan Korčok also stressed that we cannot forget about the sacrifices made by those who died 75 years ago fighting for our freedom.

“As we honour the heroes of the Slovak National Uprising, our domestic and foreign resistance movement, the 1st Czechoslovak Army Corps, we also remember other nationals who fought in the Soviet and Romanian armies and died while liberating our territories,” he said during the event held at the Foreign Affairs Ministry, as quoted by SITA.

Among the invited guests were the representatives of countries that contributed to liberating Slovakia, namely diplomats from Belarus, the Czech Republic, Kazakhstan, Romania, Russia, Ukraine and Georgia.

Korčok expressed shock over those who cast doubt on the horrors of World War II.

“Today, we commemorate the end of one of the bloodiest conflicts in European history,” he said, as quoted by SITA. “Not even 75 years later we can and should say that we’re indifferent to these events. We owe this to everybody who gave life in the fight for our freedom.”