“Czechoslovakia restored” at midnight. Borders will open after coronavirus closures

Austria also cancelling border checks with the exception of Italy. 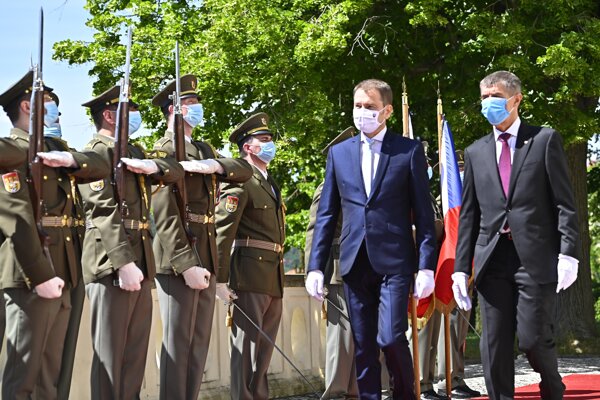 People will be free to cross borders between Slovakia and the Czech Republic as of midnight, June 4.

The unrestricted regime at the borders between Slovakia and the Czech Republic will then come into force.

“We will restore Czechoslovakia as of midnight,” PM Igor Matovič commented during his trip to Prague, where he travelled on June 3 for his first foreign trip. He met with his counterpart Andrej Babiš.

Matovič announced that the agreement about opening the borders was made two days ago.

“From June 4 on, it will be possible to travel between Slovakia and the Czech Republic like before the outbreak of the coronavirus pandemic,” Babiš confirmed, as quoted by TASR.

Moreover, from June 4, Austria decided to cancel the checks at all border crossing with the exception of Italy. People coming from the remaining countries neighbouring Austria, including Slovakia, will not need a negative COVID-19 test, nor will they have to go into compulsory quarantine, when entering Austria, ČTK newswire reported.

Opening of borders to continue

The two prime ministers reminded the public that border checks are still in place on the Slovak side of the border and all the rules upon entering Slovakia from Austria remain in place.

International bus and train transport across the Czech-Slovak borders has not been restored yet.

“I will be glad when it returns to normal,” said Andrej Babiš, as quoted by TASR.

Igor Matovič said once epidemiologists agree on opening borders with the Czech Republic, it should apply to any form of transport.

Slovakia's chief hygienist Ján Mikas said that the opening of borders with the neighbouring countries may continue.

“Perhaps we will also see a similar step as of next week with other countries, but everything depends on direct negotiations between state representatives,” Mikas summed up for TASR.

Thank you for singing up. Shortly an email will be sent to the address you provided to verify your e-mail.
Error! Please try to register again later, your e-mail was not registered.
Your email is not in a correct format.
Please confirm you are not a robot.
Share on Facebook (815)Comments disabled