Attacker in Vrútky school killed one person; he was shot dead by police

The 22-year-old attacker was a former student of the school. 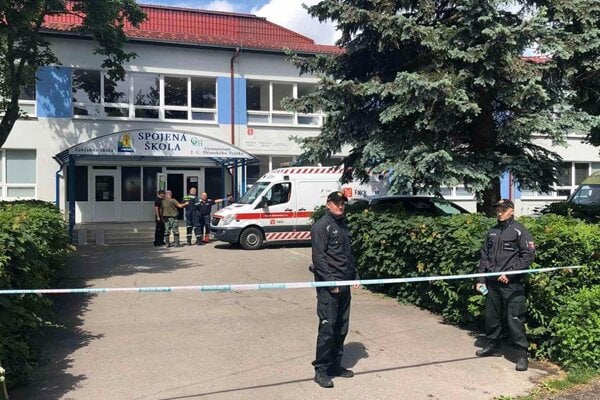 Two people died in a June 11 attack at a primary school in Vrútky, near Martin (Žilina Region).

A 22-year-old man from Martin killed one person and injured another four people, including two children. They were sent for treatment to Martin hospital, the police informed on Facebook.

Several media outlets have reported that the person who was killed is a deputy of the school’s headmistress. The information was later confirmed by Police Corps President Milan Lučanský, who arrived to Vrútky.

The attacker in Vrútky is a former student of the school where he killed and injured people, sLučanský.

“They had some problems with him in the past,” Lučanský told the SITA newswire. “Taking into consideration the time interval, it seems that this student had psychological problems.”

Lučanský noted that 22-year-old attacker, armed with a knife, broke into the school through a glass panel. The school’s deputy headmistress was trying to stop him but suffered fatal injuries at the hands of the attacker. The attacker injured a school caretaker as well.

He then ran into the nearest classroom to the right, where he attacked a teacher and two children. Afterwards, he fled the school and was followed by the school caretaker. 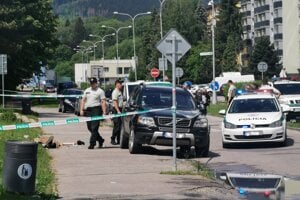 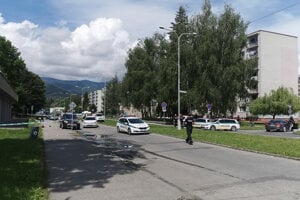 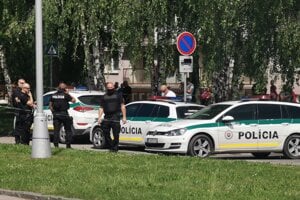 During the attack, the police received an emergency call and dispatched police near the scene of the crime. They followed the attacker, who defended himself with a knife, Lučanský said. The police were forced to use a weapon, shooting him dead.

The police asked to see recordings from the street cameras and also plan to hear witnesses of the case.

“I saw the intervention on the camera recording; the lives of the police officers were really in danger,” said Interior Minister Roman Mikulec when he arrived in Vrútky, as quoted by SITA, adding that the attacker was very aggressive. “He was ready for anything,” Mikulec said.

Meanwhile, the labour inspectorate in Žilina has launched an investigation into the attack. The inspectors will focus on the incident in which the deputy headmaster died, as well as the attack on a teacher and the school caretaker, the TASR newswire reported.

One woman has an open wound in her chest, two men have leg injuries, one child has a chest wound and another child has a wounded neck.

“All the injured people were conscious during the transport and in a stabilised condition,” Alena Krčová told SITA.

The two men with leg injuries are policemen who were hit by bullets that bounced. Krčová noted that rescuers returned to the spot to treat people with an acute stress reaction.

President Zuzana Čaputová wrote on Facebook that she feels a lot of grief and sorrow over the tragedy in Vrútky.

“I want to express support to all the teachers, police officers, children and their parents who experienced hard moments of fear,” she wrote. “I think of you. At this moment, may our solidarity with you also be a manifestation of the rejection of violence in whatever form.”

Education Minister Branislav Gröhling expressed condolences and wished for a speedy recovery for all the wounded people. “Any form of violence is unacceptable,” he said. “It's all the sadder if it occurs on school grounds.”

PM Igor Matovič said that he is sorry about the tragedy. He is in the Czech Republic at the June 11 meeting of V4 prime ministers.

Speaker of Parliament Boris Kollár condemned the violent crime and called for an investigation as well as efforts to prevent it from happening again. 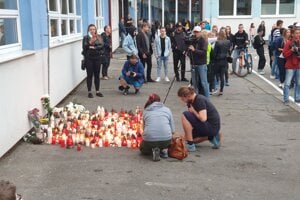 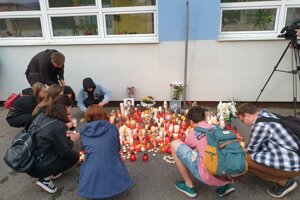 Mikulec believes that all children who are with their parents now will be okay. “Similarly, for staff of the school that eye-witnessed this tragedy,” Mikulec said. He also thanked policemen for ensuring there were no more victims at the intervention.

“Vrútky, I am with you,” said Economy Minister Richard Sulík, as quoted by SITA. “I am deeply sorry about what happened and I express my condolences to all who are affected by the tragedy. Schools are the very last spot where hatred and evil should have a place.”

Deputy PM Veronika Remišová also condemned the crime. “I express my sincere condolences to all those affected by this tragic event,” she wrote on Facebook. “The safety of our children and teachers in schools must be a top priority for the state.”

Deputy Speaker of Parliament Peter Pellegrini said that his thoughts are with the families of the victims of the attack in Vrútky.

“My thoughts are also with all the teachers who honestly fulfil their demanding and meritorious mission and must be shocked by the deed, for which their colleague paid with his life,” Pellegrini said for SITA. “My thoughts are also with all parents who accompany their child every morning to school and believe that they will return home healthy. Children, parents and teachers deserve a sense of security, and we must do our utmost to ensure it.”

Health Minister Marek Krajčí wants to personally visit victims in the Martin hospital. “What happened today is really unprecedented; it’s something our country had not experienced yet,” he said for TASR.

Also other cabinet members, as well as politicians from both parliamentary and non-parliamentary parties and various non-governmental organisations have expressed their sympathy.

Classes at the school in Vrútky were cancelled for June 12.

“We agreed to declare a day off,” said Vrútky Mayor Branislav Zacharides, as quoted by SITA.

There is no camera recording from the incident as the school has no cameras inside. However, the school is secured, and also has a reception area, he added, as reported by TASR.

He did not want to comment on increasing safety at school for now.

“The school was properly secured, but if an attacker who can overcome these obstacles appears, little can be done,” Zacharides said, as quoted by SITA, adding he wants to discuss how long the school will remain closed at the beginning of next week.

Erika Jurinová, governor of the Žilina Self-Governing Region, and Gröhling want to deal with the issue of safety at schools.

The Education Ministry as well as non-governmental organisations the Mental Health League and IPčko are ready to offer help in connection with the incident.

The Education Ministry has in this respect strengthened the helpline for children, parents and school employees. The +421(0)800 864-883 helpline is for free and in operation between 9:00 and 22:00.