New murals in Prievidza will transport its inhabitants to the past

Artist from Handlová started to paint pictures based on period photos on a block of flats in Zapotôčky four years ago. 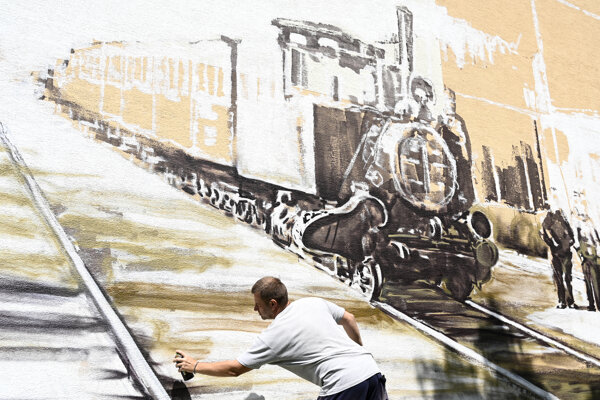 Mariánsky vŕšok (hill), Zlatá Ulička (Golden Street) and former Elisabeth Square are the artistic decorations of the chosen walls of a block of flats in the Zapotôčky borough in Prievidza. The Trenčín region offers more hidden gems, discover with our Trenčín travel guide.

Traipse through a region tangled in tales of romance, torture and prestige with the Trenčín Region Travel Guide.

The painting will transport citizens to the town a century younger. Its author, street art artist Ivan Jakušovský, is finishing the last one picturing the train station.

The painting of seven scenes of old Prievidza started four years ago on the blocks of flats in Zapotôčky.

“The idea came about four years ago. When I was painting in the surroundings by coincidence, one man – a caretaker of the block of flats that was the first in the series – came to see me,” said Jakušovský, as quoted by the TASR newswire. “There, people learn everything and pay everything on their own, I just arrived to make it come true.”