Junior coalition Za Ľudí party will elect its new leader soon. Since the election, they have been lingering under the electability threshold in polls. 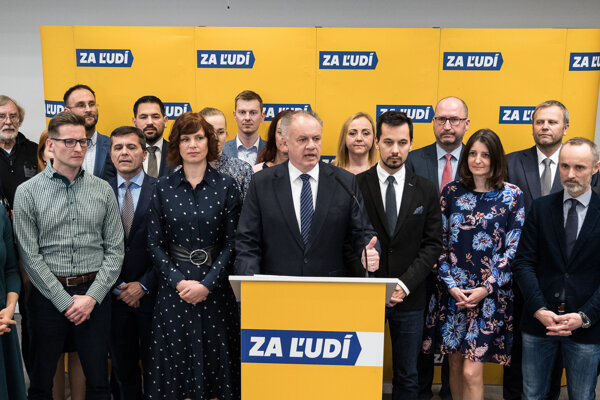 The post-election week at the turn of February and March this year was the last time the public saw the leader of the junior coalition Za Ľudí, former president Andrej Kiska.

His party barely made it to the parliament with 5.77 percent of the vote, just the fraction it was expected to win when he first announced he was founding it. The party became part of the coalition talks of the four parties that eventually led to the emergency of the current government.

About a week after the February 29 election, which marked a sweeping victory for OĽaNO with the clear outcome that its leader Igor Matovič would be the next prime minister of Slovakia, Kiska withdrew from the coalition talks. He wrote on Facebook that he had issues with his heart and was preparing for surgery.

Deputy chair of Za Ľudí, Veronika Remišová, took over and has led coalition talks on behalf of the party. She also signed the coalition agreement. As far as public appearances were concerned, Kiska limited his presence in politics to an occasional Facebook post. On June 28, he finally announced that he was not going to run for party chair anymore at the upcoming congress on August 8.

At that congress, the party that has since occupied 12 parliamentary seats and has taken over two ministerial chairs, will elect its new chair. The leader to emerge from the vote will be expected to boost the party recently staggering at around 3 percent support in polls, not enough to make it to parliament in an election.

Kiska’s party will go on without Kiska

Observers agree that the party has suffered a drop in polls due to the absence of Andrej Kiska on the political scene.

Read more articles by the topic
This article is also related to other trending topics
Juraj Šeliga, Miroslav Kollár