From resigned observers to truth-demanders. How Slovaks have changed in one decade

It's not just the president; sometimes it seems even the supermarket workers are cut from a different cloth than before. 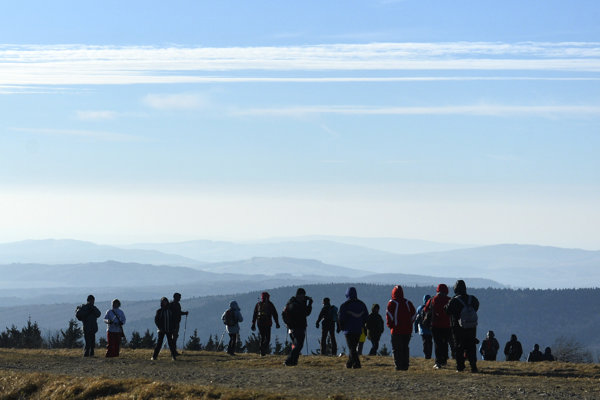 On New Year’s Eve, Czech and Slovak hikers meet at the Veľká Javorina peak on the border of the two states, to celebrate the Czecho-Slovak friendship. (Source: TASR)
Font size:A-|A+47

Ten years and what seems a lifetime ago for both Slovakia and me, I landed in Bratislava as a U.S. Fulbright professor, and though like a good Slovak I’ve since migrated to Prague, I keep returning. This baffles my Czech friends.

"You’re going there again? I only went there once, when I was 10," said one. I return multiple times yearly, and apparently unlike many Czechs, I’ve also sojourned not just in the Tatras but in Prešov, Košice, south Slovakia all around Levice, Trnava and environs, Trenčianske Teplice, Žilina, and two long weekends in Ružomberok. Two long, long weekends.

"I spent my first year in university there," a former grad student told me. "I nearly committed suicide."

Coincidentally, I almost wound up teaching in Ružomberok after my Fulbright, but then emergency triple bypass heart surgery intervened and after recovering I got a job offer in Prague. Still, I kept trying for Slovakia.

"Are you crazy?" another former Slovak student asked back in 2012. "We’re all trying to get to Prague and you want to return here?" I couldn’t bring myself to surrender my wannabe Slovak identity even after moving away. I spoke what another student called "kitchen Slovak" in Prague until 2014, until a teenaged Czech clerk in a Letná farmer shop interrupted me in English.

"Excuse me, sir," she said. "I don’t speak Slovak. Can you speak English?"

That’s okay. When I return twice yearly to Portland, Oregon, my fiftysomething saloon buddies always ask, "So how was Czechoslovakia?" When I tell that to my Prague 8 vinoteka friends of the same generation, they smile nostalgically and reply, it’s still really Czechoslovakia for us, too. My Slovak friends, mostly younger, never say that, though. The separation had to happen, they say; we were the little brother for too long.

Luckily for me, the more time I spend among Slovaks and Czechs, the less I understand them, even though my wife is Slovak-American. Are Slovaks musical, emotional, almost Italian compared to those stolid Czechs? Or are Czechs the manic, lively ones? Are both the world’s most polite people, as one longtime expat claimed, or the world’s most passive-aggressive, as a Czech colleague snarled before moving to Portugal?

What I have learned in Slovakia