Slovakia’s biggest church: Border between the Catholic and Byzantine worlds

St. Elizabeth's Cathedral took 130 years to build and stands as the largest cathedral in Slovakia. 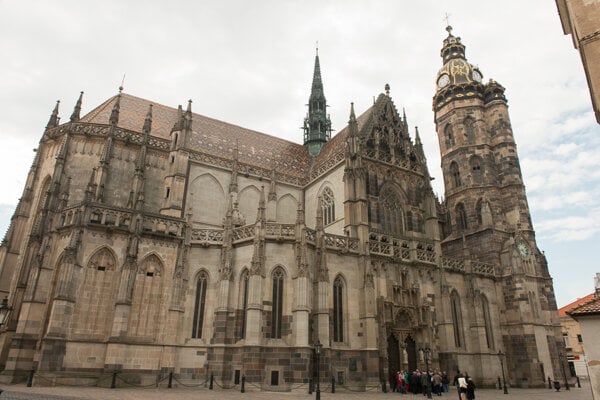 Dominating the south end of Košice’s main square, St. Elizabeth’s Cathedral honours the city’s adopted patron, St Elizabeth of Hungary, patron saint of bakers, homeless, nursing services, tertiaries, widows and young brides. The new cathedral, begun in 1378, was built on the site of the romanesque parish church dedicated to St Michael. Rather than alienate St Michael, a new gothic chapel was built in his honour in the shadow of the cathedral.

St Elizabeth’s Cathedral in Košice is Slovakia’s biggest church with a main altar as well as a stone portal that are among the most precious artworks dating from its era. St Elizabeth’s Cathedral is not only a leading representative of gothic architecture, but is representative of the division between the Catholic and Byzantine worlds that began during the Middle Ages. In short, everything east of Košice, fell under Byzantine influence.

St Elizabeth’s is a large gothic cathedral, 60 metres long and 36 metres wide, the largest in Slovakia and the leading example of this architectural style in eastern Europe. Featuring the highest dome of any Slovak church, the construction of a Košice skyscraper in recent years was abandoned because it would have been taller than St Elizabeth’s.

With room for more than 5,000 worshippers, it took 130 years to build. During this time, construction was halted by various attacks on the city, only to be restarted as hostilities abated.

The construction of the ambitious and expensive St Elizabeth’s Cathedral clearly announced to all in the region the bold confidence and prosperity of mediaeval Košice, touting its leadership position among eastern European cities and its favoured status among Hungarian royalty. The investment clearly paid off as Košice assumed centrality in the region.

Rather than light and airy like later examples of gothic architecture, the building is imposing and overwhelming. There are two towers, one truncated and the other reaching nearly 60 metres. The public is allowed (and encouraged) to climb the 161 steps in the northern tower and view the entire region from the top. In the second called Matthew Tower are premises for temporary exhibitions and after reconstruction it was opened for the public in 2016.

The exterior is all 14th century gothic, complete with dozens of decorative spires and even gargoyles on the roof directing rainwater away from the building. Legend has it that one of the gargoyles is a rather unflattering caricature of the builder’s wife.

Another legend – there is a keystone hidden someplace which, if removed, would cause the building to collapse, allegedly as an insurance policy guaranteeing the builder would be paid. 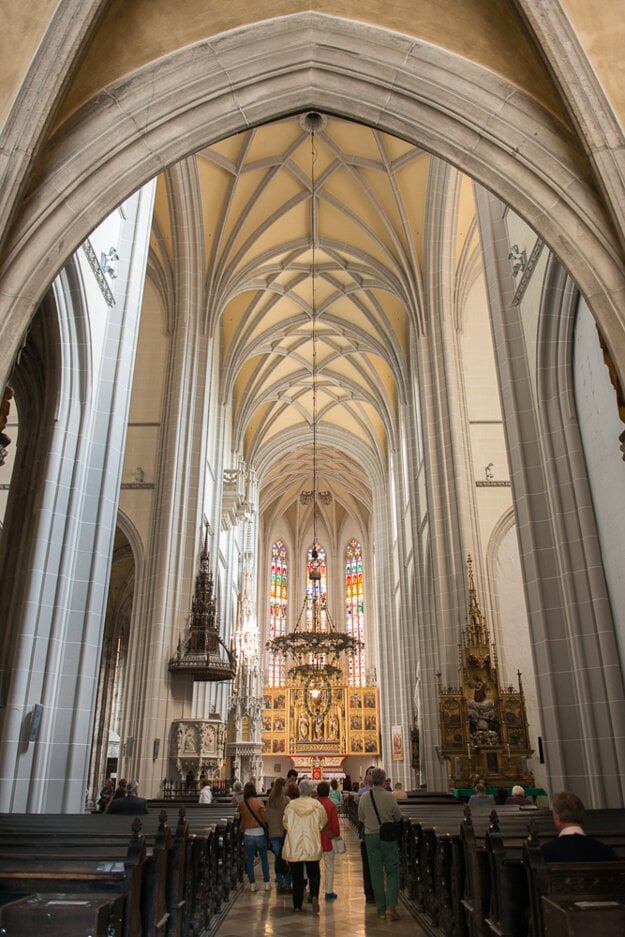 The northern entrance to the cathedral is most impressive with its engravings of the Last Judgement, scenes from the life of St Elizabeth, the Virgin Mary, the Apostle John, and the Calvary. In the middle is a sculpture of St Elizabeth.

The interior is even more impressive thanks to the main altar dedicated to St Elizabeth, which places it among the world’s highest quality gothic art. According to art historian Peter Kresánek, it was created by Nikolaus Gerhaert von Leyden and his followers, perhaps by the master himself. It consists of 48 paintings. However visitors cannot see all of them at once as they rotate seasonally.

This gothic altar with a double rotating mechanism is one of two in the world (the second is in the French city of Colmar). In the centre of the cathedral is a hanging sculpture of the Immaculata. Other chapels include a late-gothic altar with depictions of the Visitation of the Virgin Mary, a wooden sculpture of the Virgin Mary, fragments of the wall painting the Last Judgement the side altar of St Anthony of Padua, a wall painting The Resurrection, the bronze font, the altar painting of St Anna Metercia, and a gothic Calvary.

There is also an impressive carved neo-gothic stone pulpit. Two other highlights of the interior are not to be missed. One is a rare (there are only five) side-by-side carved marble spiral stairway leading up to the royal gallery (where visiting nobles could attend mass without mixing with the common folk) offering a hawk eye’s view of the cathedral’s central nave. One arm of the stairs continues up to the space where it is believed the relic of Christ’s blood used to be preserved.

The stairway, often called a lovers stair because it offers several meeting points along the way, is open to the public. Ask for a key at the shop next to the church entrance. The second highlight is the crypt where the remains of Francis II Rákóczi were moved in 1906. Rákóczi, a leader of the last anti-Habsburg uprising, was a much revered hero to the citizens of Košice. 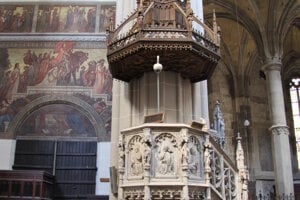 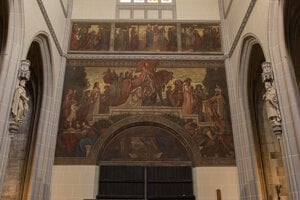 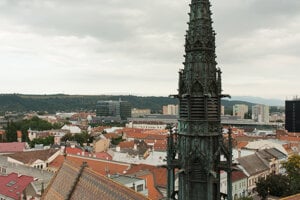