SNP, Velvet Revolution and Kamenné Squares will undergo reconstruction that should join them into one public space. 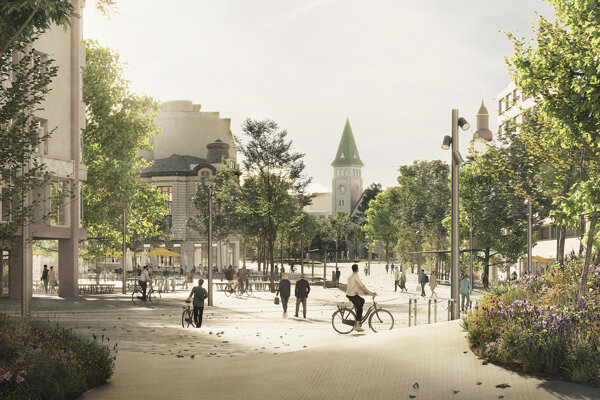 Visualisation of the future look of the SNP Square (Source: Courtesy of the Bratislava city council)
Font size:A-|A+  Comments disabled

Three adjoining squares in the heart of Bratislava will receive an uplift.

Under the Živé Námestie (Living Square) project, SNP Square, the Nežnej Revolúcie (Velvet Revolution) Square and the Kamenné Square will merge into a unified public space without cars and with greenery meeting climatic requirements, the Bratislava authorities announced as they introduced the winning design by a German team of architects on April 7.

“The proposed design offers a better space for people to meet, addresses the complicated traffic situation, which has always been here to the detriment of pedestrians, and deals with new climate demands,” said Bratislava Mayor Matúš Vallo.

The three interconnected squares totalling ​​almost 35,000 square metres make up the largest public space in the centre of the capital. No reconstruction had taken place since the 1970s, with the exception of Klobučnícka Street and the surroundings of the Old Market Hall.

After the planned reconstruction with an estimated price tag of €20 million, the three squares will create a loop along the former moat surrounding the historical city centre, extending the pedestrian area in the city centre.

Architects who don’t want to build

The Živé Námestie project is one of the city’s main projects for the reconstruction and renewal of public spaces within the Živé Miesta (Living Spaces) schemes.