Junior coalition party is experiencing problems that may disrupt the Heger government. 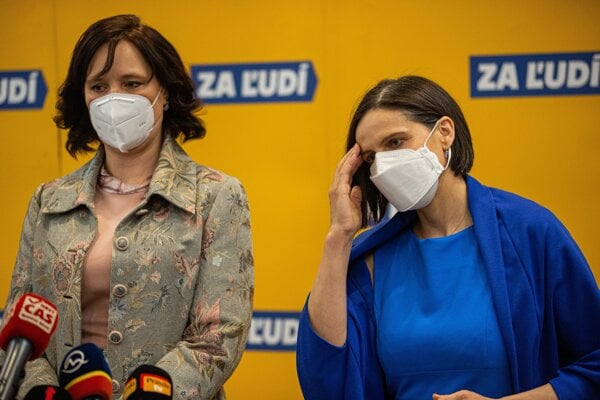 The smallest coalition party, Za Ľudí, has been experiencing tremors for a few months now. In the latest escalation of tension, some of its members launched an attempt to replace Veronika Remišová as the party leader, but observers openly doubt the party can be saved.

Voices from inside the party suggest that there are two groups of members – those who stand behind current chair Remišová and those who would like to see someone else instead of her, most likely Justice Minister Mária Kolíková. Both sides have lately been quite vocal with their criticism of each other in the media. Judging from the development so far, observers say the attempt to replace the woman in the top post could go either way.

The party that, contrary to high expectations, made it to parliament with just above 5 percent of the votes necessary to enter the house, has since been oscillating under the parliamentary threshold in the polls. This year, it saw three prominent members depart, two of them still MPs. Regional boards of the party in Prešov, Košice and Nitra have recently called for an unscheduled party congress, while a similar decision is expected from Bratislava and Žilina.

“It is obvious that there are disagreements within the party that could be seen not only through the media but also ideologically since Veronika Remišová has tried to identify herself against the 'liberal-progressive' wing in the party,” Viera Žúborová, political analyst and director of the Bratislava Policy Institute, told The Slovak Spectator.

The party, founded shortly before the 2020 election by former president Andrej Kiska, was formed as a centrist party where such issues should be second-rate, but unfortunately, they are not, the analyst added.

Problems with or without Remišová

The party elected Veronika Remišová to its chair in August last year, after Kiska stepped down from the top party post after the February 2020 election and withdrew from politics altogether.

At the congress in Trenčianske Teplice, he supported Remišová against Miroslav Kollár, the Hlohovec mayor and MP who has since left the party and joined the non-parliamentary Spolu.

Post-election polls have made it clear that many voters supported Za Ľudí because of Kiska, said political analyst Radovan Štefančík from the University of Economics in Bratislava.

"For them, the content, the ideological focus or the pre-election promises was not as important as the personality of the leader," Štefančík told The Slovak Spectator.

The Health Ministry plans to stop registration for the Sputnik V vaccine in late June.