Keeping dogs on chains will be banned. A victory for all dogs in Slovakia, animal rights advocate claims

Chained dogs are the most frequently reported cases of animal torture. 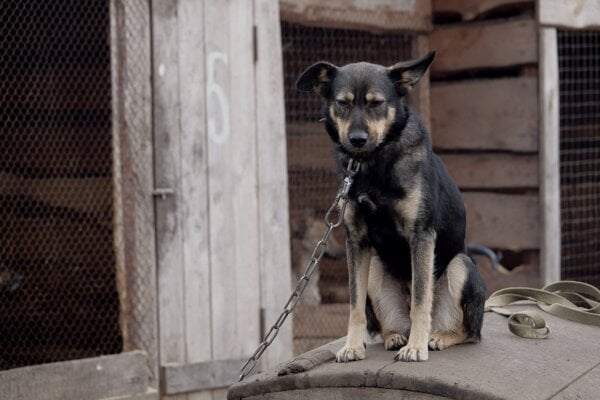 Dog rescue centres sometimes post photos of a rescued dog with a chain stuck on its neck. That might happen when the dog is held solely by a chain without being let out for a walk regularly.

Even though Slovakia has had a law stating that dogs cannot be kept permanently chained, the enforcement of the law has remained complicated. This should change after the Slovak parliament passed an amendment on June 22 with a clear ban on keeping dogs on a chain. The amendment, sponsored by a group of MPs from all four coalition parties, was supported by 96 of the 117 deputies present in the plenum during the vote.

The new legislation should be effective from January 1, 2022 for newborn and young dogs. There is a transition period until 2024, and the law contains a number of exceptions.

“Despite big compromises, [the amendment] is a huge victory for thousands of dogs in Slovakia,” Pavla Dugovičová, chair of Sloboda Zvierat (Freedom of Animals), told The Slovak Spectator.

The NGO that she leads and that operates its own shelter had campaigned to change the law for years now. Dugovičová is optimistic about the better enforcement of the amended law, but said that they will try to scrap some of the exceptions remaining in the amendment for now.

The amended law poses a clear ban on keeping a dog chained with a “tying tool” in breeding facilities and households. For dog owners or keepers, the significant change is that if they had maintained the dog tied until now, they will not able to so anymore, unless one of the exceptions applies to them.