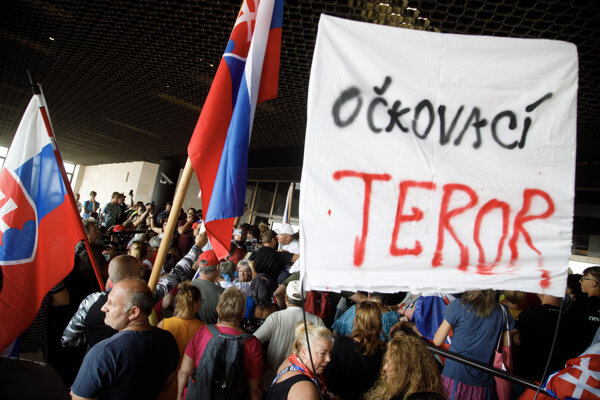 I have lived in Slovakia for nearly 17 years now. In that time, I have been told, with deadly seriousness, that 9/11 was an inside job by the US government against its own people. I have been told, by an entire class of my own students, that the Illuminati controls literally everything, and that the proof can be found in dissections of music videos on YouTube.

On January 7 of this year, I wrote a letter to the editor about my revulsion at the January 6 US Capitol insurrection. There followed several reactions in the comments supporting Donald Trump’s outlandish and thoroughly debunked accusations of massive election fraud. I did not respond, because I believe in the old proverb that one has gained nothing by arguing with an idiot, but, on the contrary, has only lost a great deal of energy.

However, I find it hard not to engage with those who perpetuate outright lies about the safety and efficacy of vaccines, especially when those lies may result in a frightening number of hospitalisations and deaths. These days, I am daily reminded of my grandmother’s grave recollections of being terrified of going to the swimming pool as a young girl, for fear she would catch polio. She considered the polio vaccine a miracle, and, as a child, it never crossed my mind that anyone would consider vaccines any less wonderful than lightbulbs, running water, and the internal combustion engine.

Sadly, this naivete has been shattered in recent months, as I have watched the poison of anti-vax theories move from the lunatic fringe of unhinged American D-list celebrities like Jenny McCarthy to the mainstream media and political discourse.

The prevalence of anti-vaccine lies in Slovakia (with an alarmingly low vaccination rate among EU countries) I can only chalk it up to the Slovak love of the conspiracy theory, a love which must be as infectious as Covid-19, because it is also spreading rapidly to the US.

Social scientists have been writing for many years about the attractiveness of conspiracy theories, be they Illuminati, 9/11 truthism, Pizzagate, or Q-Anon. The idea of a sinister mastermind like Bill Gates or George Soros trying to slip microchips into our bloodstreams via injections might be frightening, but it is less frightening than the caprice of biology, which renders humans and their dreams and goals utterly insignificant. Better to live with an all-encompassing but ultimately understandable human evil, than the idea that our lives are always lived on a razor’s edge, and a microorganism can bring it all crashing down, for absolutely no reason at all.

By denying the existence of this randomness, of course, we help it along. Slovakia nearly had its own January 6 on July 23 (a possibility I alluded to in my aforementioned letter). While these angry and terrified protestors are worried about being manipulated by Bill Gates, George Soros, or Igor Matovič, they are in a very direct way being manipulated by the populist ambitions of men like Robert Fico and Boris Kollár, who are betting on using the pandemic to score political points.

But you cannot use a pandemic any more than you can use a tsunami, and the Delta variant is going to crash over Slovakia exactly like a tsunami if more people don’t start getting jabs, double-quick.

Personally, I’d rather take my chances with Bill Gates and his microchips (or whatever silly fiction we’re pushing at the moment) than with the cold, uncaring reality of the Delta variant.