Lenka Wittenbergerová has been charged in a major corruption case, her predecessor in the top Financial Administration post testifying against her. 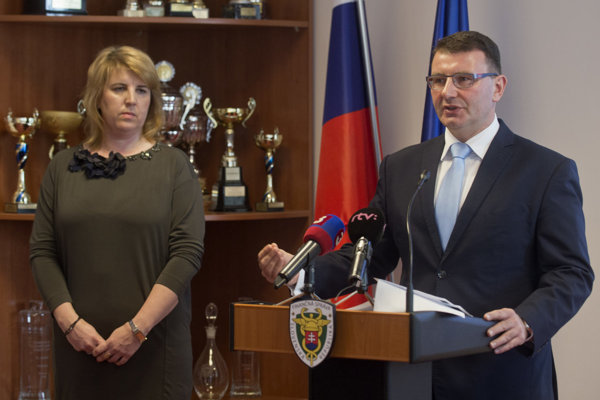 Wittenbergerová and Imrecze in 2018, when she was taking over after his resignation. (Source: TASR)
Font size:A-|A+

Former head of the Financial Administration, Lenka Wittenbergerová, has confessed to her involvement in corruption.

Wittenbergerová was detained on August 4, during the Mýtnik (Toll Collector) 3 police operation, which also saw charges pressed against Miroslav Výboh, the oligarch and friend of former prime minister Robert Fico.

Aktuality.sk reported that Wittenbergerová has confessed to having committed the crimes she was charged with. She has thus been released from detention and will most likely not face a proposal to be taken into custody.

The attorney of the former boss of the tax administration, Vladimír Mitro, confirmed for the TASR newswire that Wittenbergerová was released, but said that the information about her confession were speculation.

"My client was released from detention yesterday (August 4), after she testified as charged. She made a statement on the charges brought against her and will be prosecuted at large," he said as quoted by TASR.

Special Prosecutor Daniel Lipšic confirmed during his press conference on August 5 that Wittenbergová had confessed to the crimes she was charged with.

The Mýtnik case mostly concerns corruption in IT projects in the Financial Administration.

Several people have been charged in this respect since January 2021, including ex-head of the Financial Administration, František Imrecze, businessman Jozef Brhel, his brother Peter Brhel, businessman Michal Suchoba, and former head of the IT department at the Financial Administration, Milan Grega. Imrecze has since confessed to the crimes he was charged with in the Mýtnik case and has started cooperating with the police. He was released from custody in late July.

According to Aktuality.sk, Wittenbergerová was allegedly on a kind of payroll. Imrecze, who confessed and is now cooperating with investigators, said that when he was leaving office, he gave Suchoba a small piece of paper bearing a list of names with numbers, including the note "Lenka 50" written besides Wittenbergerová's name.

Shortly before the 2020 election, Wittenbergerová signed a contract with Alison, Suchoba's company, the contract worth €50 million, Aktuality.sk wrote.