Covid jab as a political statement. How do politicians' opinions matter to people?

Vaccination is an emotionally charged topic, that’s why many politicians cannot resist it. 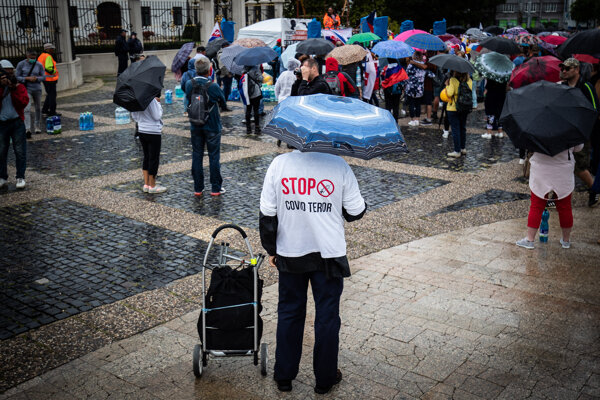 When former PM Peter Pellegrini tried to address the protesting crowd in front of the parliament in late July, they did not give him a chance to speak. Protesters who gathered to express their disagreement with vaccination and anti-pandemic rules booed and whistled until Pellegrini disappeared inside the parliament building again.

Some of his fellow parliamentarians were luckier. MPs Marian Kotleba of the far-right People’s Party Our Slovakia and Ľuboš Blaha of Smer succeeded in addressing the crowd.

Protests against all things pandemic-related are not special to Slovakia, since large protests have occurred in countries like Germany, Italy, France or the US. But observers agree that in Slovakia, Covid vaccination has been largely politicised and getting the jab has been used by some as a show of their political preferences.

“Both the coalition and opposition use this issue to strengthen their positions,” Barbara Lášticová, a social psychologist of the Slovak Academy of Sciences (SAV), told The Slovak Spectator.

Observers of Slovakia's society agree that the opinions of many voters are in accordance with the party they prefer. Supporters of the opposition are less vaccinated in general.

Yet politicians' opinions on vaccination only matter to about one fifth of the population. Politicians are more likely to confirm someone’s opinion than change it completely.

The results of the July edition of the regularly conducted How Are You, Slovakia? poll by SAV, Seesame and MNFORCE communication agency, show that the vaccination rate is significantly lower among voters of opposition parties – Smer, People’s Party Our Slovakia (ĽSNS), renegades from Smer (Hlas) and renegades from ĽSNS (Republika). Hlas voters are an exception, Lášticová noted.