It is the first time in the history of modern Slovak cinematography a Slovak film has been awarded in Venice. 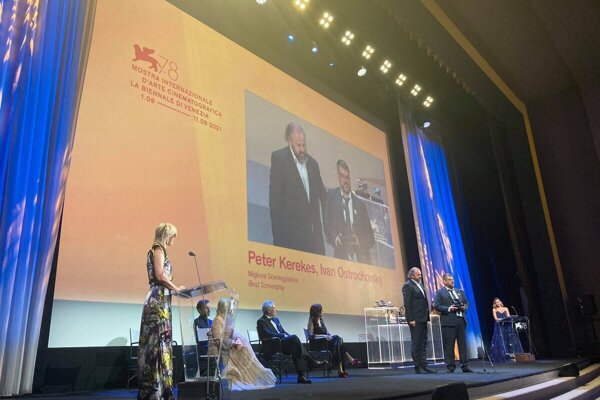 The Slovak film 107 mothers (Cenzorka in Slovak) received an Award for Best Screenplay at the International Film Festival in Venice. The creators of the film, Peter Kerekes and Ivan Ostrochovský, took the prize on Saturday during the closing ceremony.

It is the first time in the history of modern Slovak cinematography a Slovak film has been awarded in Venice.

“Our film is about mothers, their complicated lives and situations,” Kerekes said during his speech, as quoted by the TASR newswire. “Therefore, we would like to dedicate this award to mothers. My mother, my wife who is also mother, and to all the mothers in prison 74 in Odessa,” he added.

Film from Ukrainian prison for women

107 Mothers is the first Slovak feature-length film that was officially chosen for the competitive section Orizzonti. It competed against 18 films at the 78th year of the world's oldest film festival.

Kerekes spent six years visiting and filming in a Ukrainian prison for women. Most of the protagonists in the film share their real-life stories, but his film is not a documentary this time.

“From the many stories of women in Colony 74, I was most inspired by a story of Lesja, who killed her husband out of jealousy and arrived in prison pregnant. The film starts with her giving a birth,” the director described, as quoted by TASR.

Audiences in Slovakia can see the film during the opening of the film festival Cinematik in Piešťany on September 14. The film will go to Slovak cinemas a month later.