Bratislava Castle as a tattoo is a cliché, a Ukrainian tattooist says 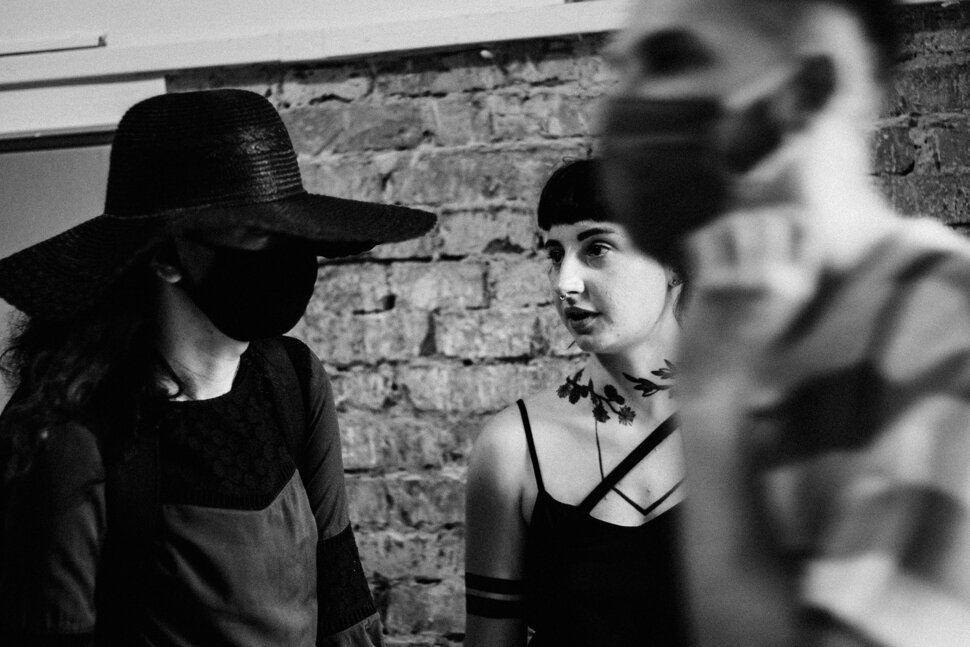 Slovakia was not a place Olesia “Les” Paskarenko, as a 17-year-old, wanted to be sent away to by her parents, but six years on the Ukrainian tattoo artist calls it her home even though she feels like an immigrant here and there. 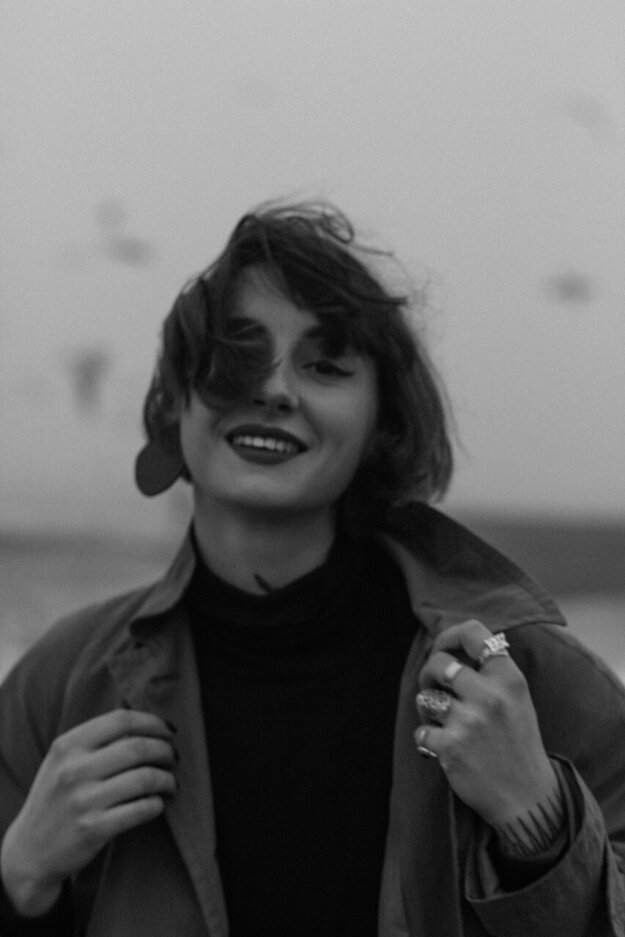 Les Paskarenko first wanted to become a landscape architect. She became a tattoo artist instead. (Source: Archive of Les Paskarenko)

And so, in 2015, with a large suitcase and a knit market bag in her hands, the Ukrainian teenager left her hometown of Odessa and set out on a cinematic adventure, as she put it, to study at the Slovak University of Agriculture in Nitra, hoping to become a landscape architect.

The beginnings were hard for her, speaking no Slovak and people in Nitra refusing to speak with her in English. However, because of her young age and studies in Slovak, she managed to learn the language quickly.

“Today I think in Slovak most of the time,” Paskarenko said.

While studying in Nitra, in addition to landscape architecture and learning Slovak, she discovered and also decided to learn something else and unknown to her until then – the art of tattooing.

“As soon as I walked into a tattoo salon, I knew that was the thing I wanted to pursue as a career,” said Paskarenko, who still completed her university studies.

Inexperienced and convinced that nobody had ever had two black lines tattooed on their arm, she decided to have them tattooed for cheap money on her 18th birthday during a holiday in Ukraine. Soon after she found that the Internet was full of similar tattoos. This experience did not discourage her, and she kept on returning to tattooists every time she travelled back to Ukraine for holidays, but this time with her own designs.

This is now my home, and I don’t think my life will take me anywhere else.

Today, because of the “trashy” designs, which she herself does not remember, her left arm is completely tattooed in black, all designs disappearing under the colour.

As a student Paskarenko tattooed others at a university campus dormitory in Nitra for a pack of cigarettes.

“I learnt how to do it from YouTube,” she claimed, adding that she used fruits to get a handle of the craft.

Friends and acquaintances, to her surprise, were okay with her work although she had little experience. In fact, it was she who saw a problem in the first Paskarenko-made tattoos, offering futilely to fix the tattoos later on.

In Slovakia, the young tattoo artist also found her role model, the tattoo artist Mare. She always wanted to join his studio and learn from him, and she did after all.

“He was the first person to believe in me as a tattoo artist,” said Paskarenko, who is fascinated by the “incredible” evolution of tattoos.

Over the years, for her personal approach, she has built a community of like-minded clients who return to her for more tattoos, and the community is gradually growing. Unlike a tattoo saloon, which has nothing to do with art and resembles an anthill, she said, a tattoo studio is not just about art but also about an intimate relationship between a tattoo artist and a client.

“In the room, it is just me and the client,” she explained. 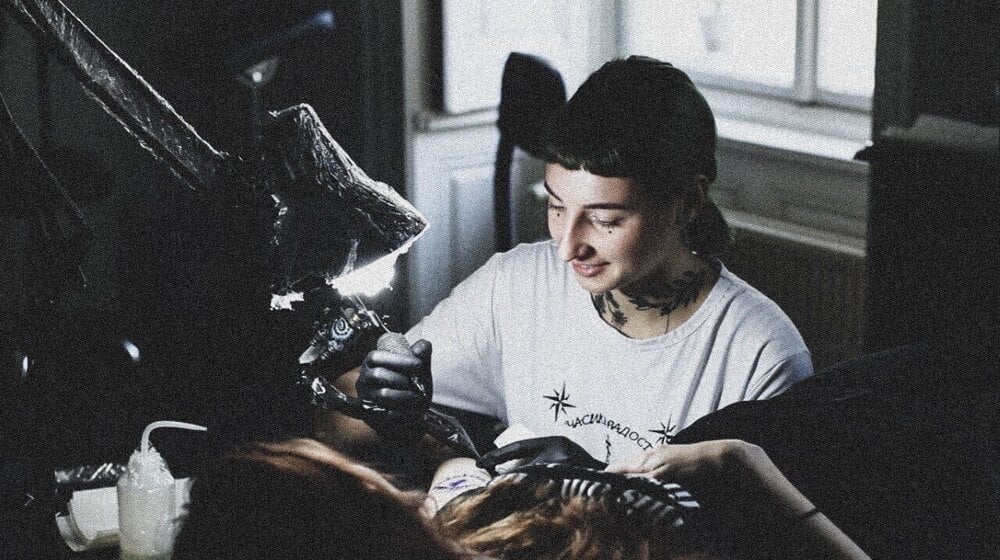 With the client, Paskarenko consults the specific tattoo she will draw, where it should be placed on their body, and she even calms the person down if they are stressed out. She can spend hours tattooing one design on the body, devoting one day to each client, regardless of the size of a tattoo.

Just like she had to get used to life in Slovakia, it took some time for her parents to come to terms with the fact that their daughter has tattoos all over her body, including “hello” in her native language of Russian on her foot, and that she earns a living by decorating other people’s bodies.

“They understand it now. They even brag about their daughter to friends,” she said.

I’m a rebel on the inside, and I need to somehow feed this part of me.

In her opinion, they would probably agree to getting tattooed by her. If it happened one day, Paskarenko would suggest flowers from her mother’s garden. Plants are a common theme in her works either way, perhaps because her first name Olesia means “girl from the forest.”

As for her own body, despite being covered in tattoos, she does not have anything related to Ukraine or Slovakia on it yet. However, she had clients who asked her in the past to have Bratislava Castle or well-known Slovak peaks tattooed on their bodies.

“Those are now clichés,” she said, “In my case, I would go for a large Čičmany folk pattern, as it is something I imagine when thinking of Slovakia.”

Paskarenko rides her bike in Bratislava, the city she considers home and a safe place for cyclists. Now and then she catches herself comparing the Slovak capital with her hometown of Odessa, which is five times more populous than Bratislava.

“I compare differences, not whether things are bad here and good there,” she said, noting that her first trip to Bratislava was quite epic. She travelled to the city from Nitra, with no Internet on her phone. She got lost and found herself in a field and in the rain.

“It turned out that I got off at a station in the remote Vajnory borough, thinking it was Bratislava main station,” she remembered.

Today, she knows the city well. During the pandemic when she had nothing to do, she learnt about and visited the Bratislava bunkers built during the war. Impressed by the cold aesthetics, she decided to explore this side of the city a little bit more, visiting some run-down and unfinished buildings as well as very old cemeteries. 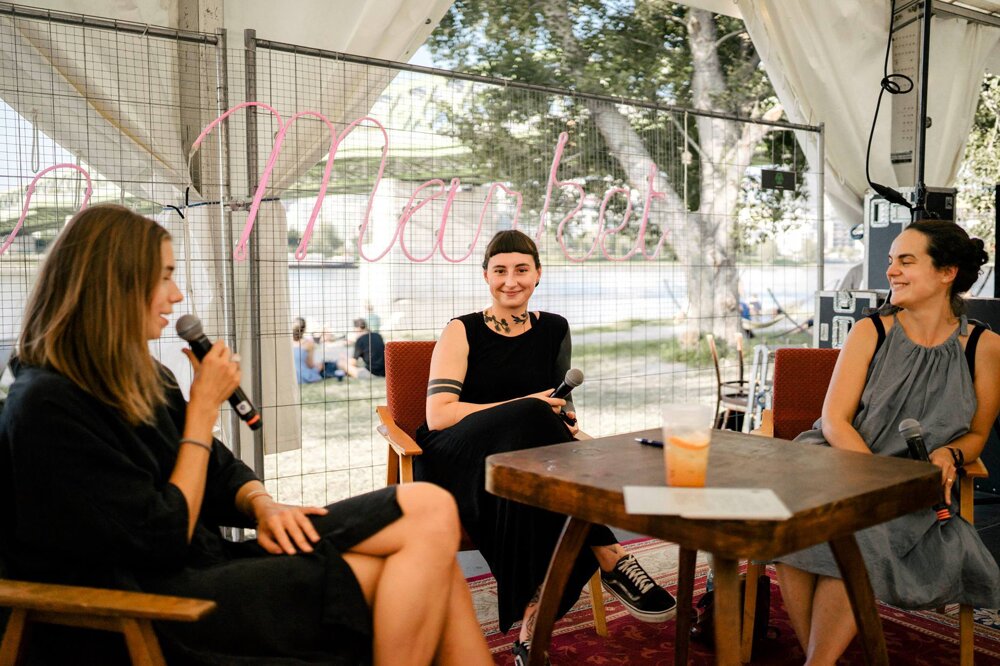 Les Paskarenko (centre) during a discussion about urban exploration at the 2021 Urban Market event in Bratislava. (Source: Soňa Maletz/fjúžn festival)

“When we were kids, my friends and I used to climb rooftops,” she recalled, saying that these kind of activities offer her a new perspective, although it does not have to be legal at all times.

“I just want to absorb the atmosphere of such a place for 30 seconds, and that’s it,” Paskarenko said. She went on to stress that she was not a vandal, nor did she ever take anything from abandoned buildings or buildings under construction in Bratislava.

In addition, some time ago after attending the Walls of Solitude event near Piešťany, she found Slovakia to be a land of ancient manor-houses and that she would like to visit as many of them as possible. But this is not just about aesthetically damaged walls, ruins, vaults and the like in her case.

“I’m a rebel on the inside, and I need to somehow feed this part of me,” explaining why she loves urban exploration. 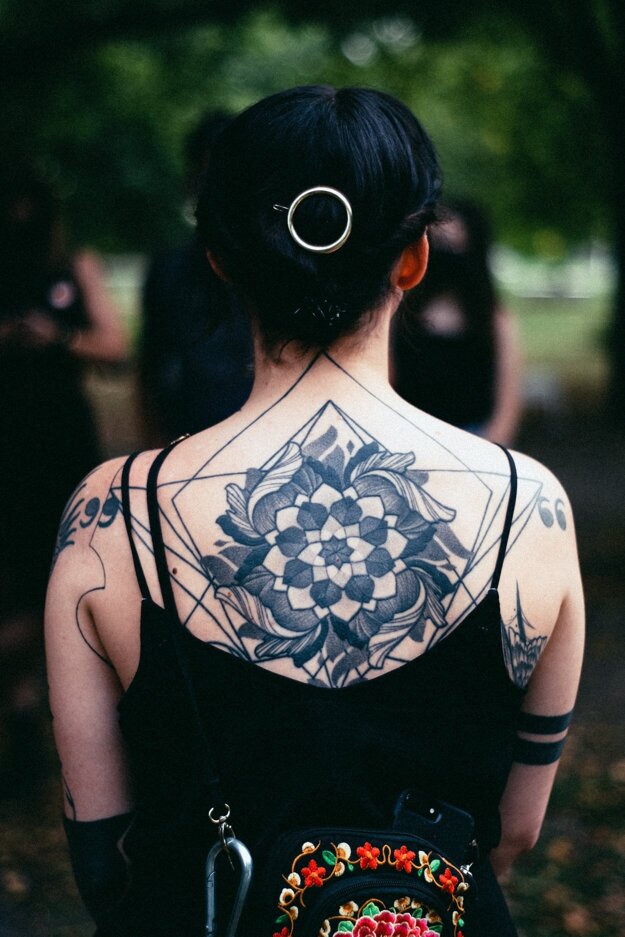 Paskarenko’s life could have looked differently from what it is now. For about a decade, as a child she danced ballet in Odessa. Ukrainians enrolling their daughters in ballet or gymnastics classes was very common in the times of the Soviet Union.

“They were seen as elitists,” she said. “It still happens but not as much as in the past.”

Paskarenko was talented and accepted for studies at a ballet school in Kiev, but the idea of a life spent under strict rules and in a ballet cage was not for her. When she came to Slovakia, she left ballet behind. Now that she knows who she is and what she wants from life she is keen to go back to ballet just for pure pleasure.

“It’s like a sport. You have a craving to do it,” Paskarenko said. She is not bothered by the perfect picture of a ballet dancer in contrast with her tattooed body, saying she is a “black swan but still beautiful.”

No return to Ukraine

Ballet is not the only thing she misses. She also mentioned the Black Sea as well as shawarma, a Turkish meal similar to gyros or kebab, as the first meal she used to buy with the first money she earned in Odessa as a teenager. Moreover, Paskarenko misses a part of Ukrainian mentality.

“You know you’ve got very little, but you can still enjoy small things in life and give it your all,” she said about the mentality bit.

Paskarenko does not know if she is more Ukrainian or Slovak, but she knows that she is both of these things. She now has two homes, although she feels like a “tourist who lives and works in Slovakia” when it comes to her visa situation.

“I cannot vote here, and I don’t want to vote in Ukraine,” she noted, emphasising that she is not happy about how things are going in her homeland and how negatively Slovaks perceive Ukrainians as well. 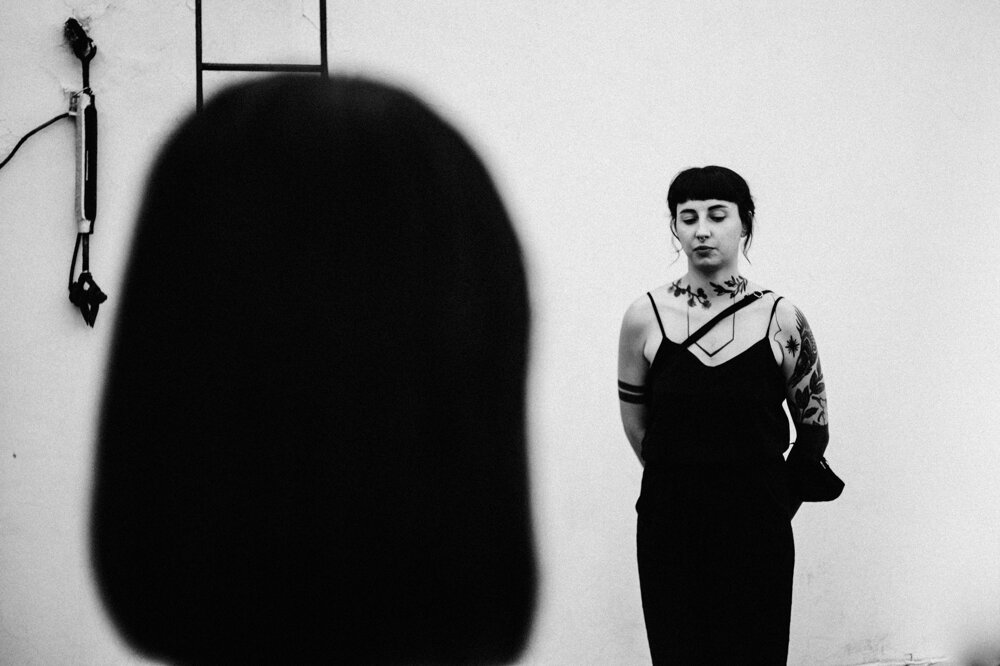 The tattoo artist claimed that she would not want to raise children in Ukraine, which she describes as a less stable and poor country stuck in the nineties, where corruption is ubiquitous and opportunities are scarce.

“Even if you wanted to be a 100-percent honest person, you cannot. Because of the corruption everywhere,” she added.

During the pandemic, when many people lost their hope in better days, Paskarenko was indeed thinking of returning to Ukraine, though she had no idea what she would do there.

“This is now my home, and I don’t think my life will take me anywhere else,” Paskarenko said, “Definitely not back to Ukraine.”