Opposition parties, far right and anti-vax groups held gatherings in the capital on the national holiday. 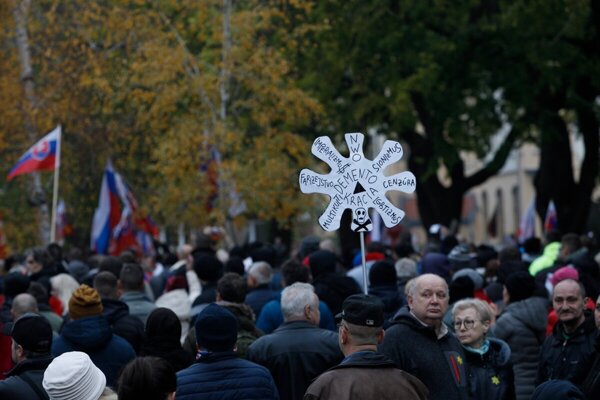 Ten protest gatherings were announced in Bratislava on November 17, the national holiday marking the 1989 Velvet Revolution under the official name the Day of Fight for Freedom and Democracy.

Most of the protests were organised by the opposition, far right groups and anti-vax groups.

Hundreds of protesters gathered in front of the parliament building near Bratislava Castle for a protest organised by the opposition Smer party. Robert Fico laid wreaths at the memorial of Prague Spring leader Alexander Dubcek.

The LSNS renegades who founded the Republika party addressed a separate gathering at Šafárikovo Square near the Comenius University main building. In the days running up to the protest, they repeatedly posted announcements on social networks that buses would be transporting people for the gathering from mostly central-Slovak towns.

In both cases, the participants criticised the ruling coalition and blamed them for the bad state the country is in. They particularly objected to the anti-pandemic measures and vaccination efforts.

In the evening, the protest participants moved across the centre of Bratislava to the Government's Office building at Freedom Square. They blocked the traffic on some of the main traffic routes in the area. Most tram lines running through the centre were limited.