How to do a Christmas cookie exchange right (recipes)

There have been 14 sucessful editions of this joint baking event. 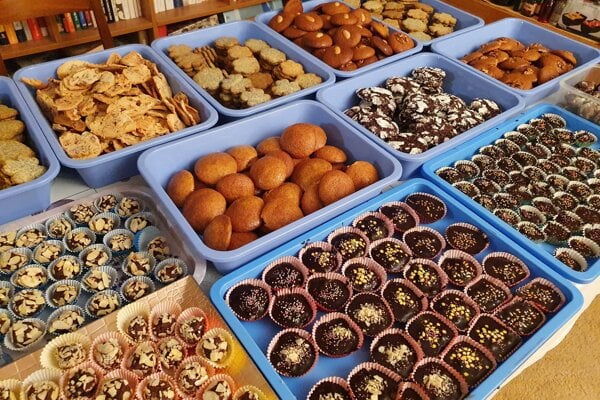 I have never been one of those housewives who boasts of how many types of Christmas pastries they have baked before Christmas. My husband does not like sweets at all and it does not make sense to bake for myself only. My attitude toward Christmas baking changed after my good friend Vierka decided to organise joint baking. In addition to taking from this mainly social event boxes full of varied Christmas cookies, cakes, and pastries in quantities that can be handled by our stomachs, it’s a very pleasant evening spent helping each other during kneading, rolling, coring and decorating the pastries. To be frank, which of us would like to spread jam and put together shortbread rings from a four-fold dose of dough or fill 1.5 kilos of prunes with almonds and then dip them in chocolate? But when we do it four at a time, the work is done in no time.

Nevertheless, the most amusing part of the evening is the final division of our production. First, we place all the shortbread rings, gingerbreads, tiny vanilla and almond crescents, and balls prepared according to all possible recipes on the table to take pictures of them. Then we gather around the table with boxes littered with napkins in hand and at the instruction “we start with gingerbread, take 10 at first” we begin to fill our boxes. 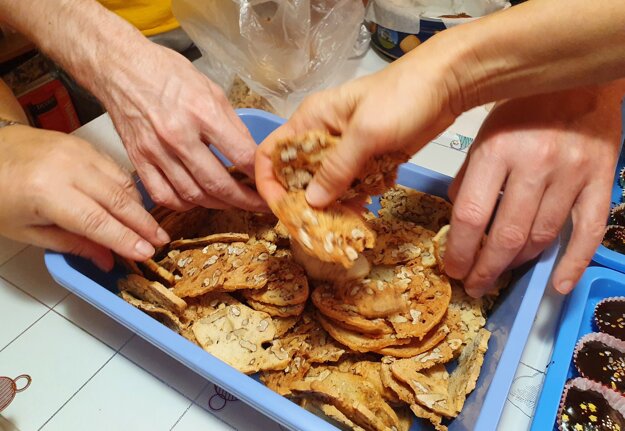 Depending on how many gingerbread cookies remain undivided, we continue with lower and lower numbers until we share them all. And so we continue with other pastries. The joint baking has met with such success that Vierka has to organise two sessions. This year we met for the incredible 14th edition.

I started my baking career at the joint baking event, maybe in its second or third year, with fig balls. Then I found a recipe for excellent chocolate truffles. Some years later I traded them for chocolate treats called Šuhajdy in Slovak. I borrowed the recipe from our common baking book, in which we write down the recipes of all the cakes and pastries we prepare at the joint baking event. I have only slightly modified it over the years so that the final product is, at least in my opinion, a perfect interplay of flavours and visuals.

The basis is to use quality ingredients, exactly in line with what one of the regular participants, Emeše, says: “Will I scrape on myself?” And so she puts three times as much poppy, walnut and cottage cheese fillings in the layered Christmas Eve cake called Štedrák as the recipe requires. So I replaced the original Cera, a kind of margarine for baking, with genuine butter. Maybe the final treats are not so glossy, but they’re so different in taste than chalk and cheese. I use 40 percent rum, no dilutions, only then the filling has the right flair. And I put all those 80 and 90 percent chocolates that I accumulate at home during the year in the base chocolate mass.

This year, I extended my baking contribution with Medvedie Labky, meaning bear paws in English. They used to be a traditional Christmas pastry in my family when I was a small girl. But I did not prepare them according to my mom’s recipe, but I reached for a recipe from my grand mam’s cookbook from 1926. In it, almonds are used instead of walnuts and the recipe also calls for lemon peel. At first, I thought this was a quite untraditional ingredient for this kind of pastry, but in the end it gives it a special, fresh undertone.

However, there is more to the event than baking and dividing the pastries. After we divide all the cakes and tidy the kitchen, we have dinner from what we have brought to Vierka. I usually contribute with a bean soup prepared according to the recipe of former actor Pavol Mikulík. I have slightly modified this recipe too - in the end, I don’t put flour in the soup so it is also suitable for people on a gluten-free diet. We haven't tried it with cognac, which Mr. Mikulík recommended to put on the bottom of the plate before serving. 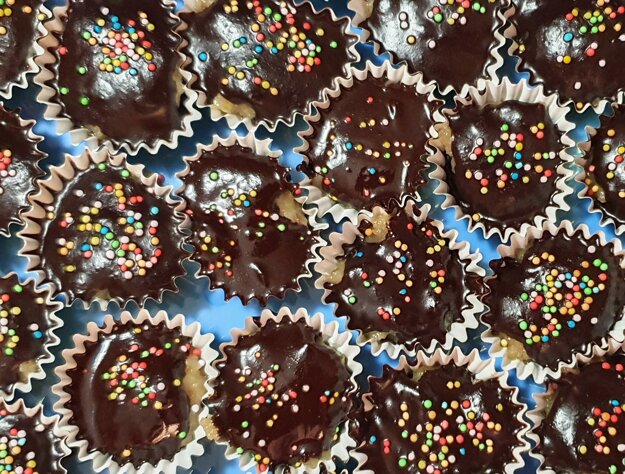 - 100g cooking chocolate (or any other quality chocolate)

- nuts or balls, stars for decoration - there are no limits to your imagination

Melt the butter and chocolate in the water bath and stir in the cocoa. Pour half of the melted mass into the cups with a spoon. Mix together the ground walnuts, sugar, hot milk and rum. Dispense the mixture with a spoon into cups with the chocolate bottoms. Pour the remaining chocolate over the filling. Garnish with half a nut, balls, beads, stars, etc. 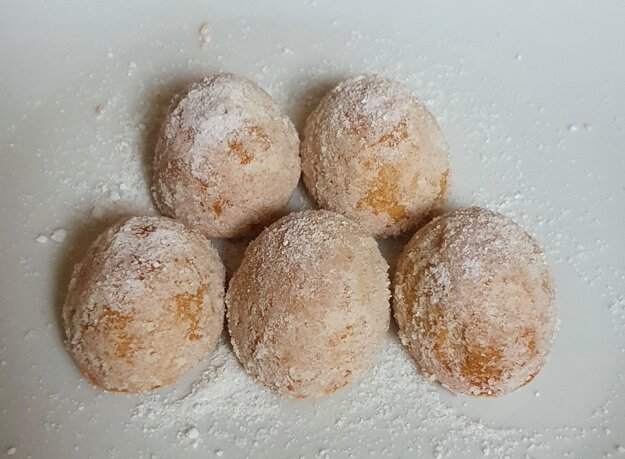 - half a teaspoon of cinnamon powder, one ground clove

- lemon peel from one half a lemon

- a pinch of baking powder

Mix together all the ingredients to form a dough. Put it in the fridge to cool for a while. Afterwards, fill the greased and floured moulds with the dough. Bake at a medium heat for some 20 minutes depending on the moulds. After they cool down, remove them from the moulds and sprinkle them with powdered sugar. 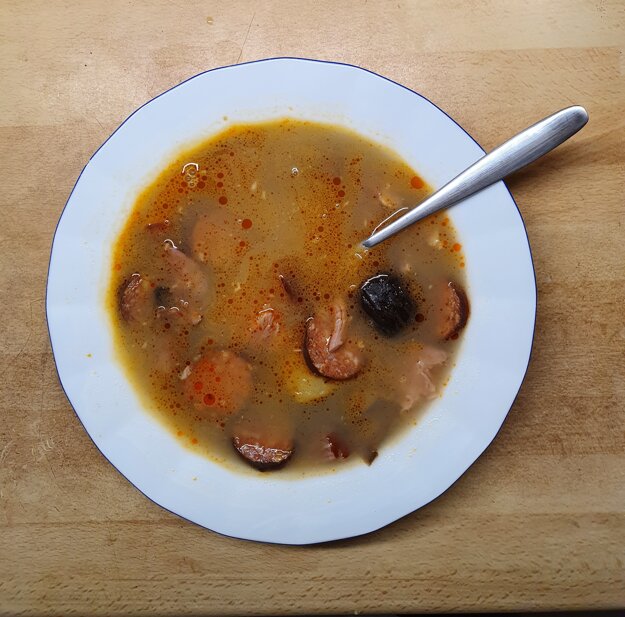 - a handful of dried mushrooms

- 2 quality sausage (or even three)

- beans (I prefer butter beans, soaked the day before cooking, about 250 g)

- a handful of prunes

- smoked pork knuckle (approximately 1.3 kg - not larger, because then it is too big to be cooked in a normal pot)

- some flour (if you don’t add it, you get a gluten-free version of the soup)

Put the knuckle, sausages, onions pierced with cloves, prunes, beans and mushrooms into the pot with water and cook. While the soup is bubbling on the stove, clean and chop the potatoes and carrots. After about an hour, take the sausage out of the soup. When the soup is almost done (usually after 1.5 hours of boiling - it is necessary to watch mainly the beans), add the potatoes and carrots. Cook for another 30 minutes until the potatoes and carrots are soft. Remove the pot from the stove. Take out the knuckle and debone it. Return the sliced ​​meat to the pot. Cut the sausages and put them back in the pot, too. Add the cream and mix thoroughly. Neither spices nor salt are needed as all the flavours come from the ingredients. Sprinkle the soup with flour, bring to a boil and set aside. Serve the slightly chilled soup with some cognac, which we drip into the plate.