Dialogue with Russia must not lead to the drawing of red lines, says head of Slovak diplomacy

Slovakia welcomes assurances from the US that Europe's security will not be discussed without Europe. 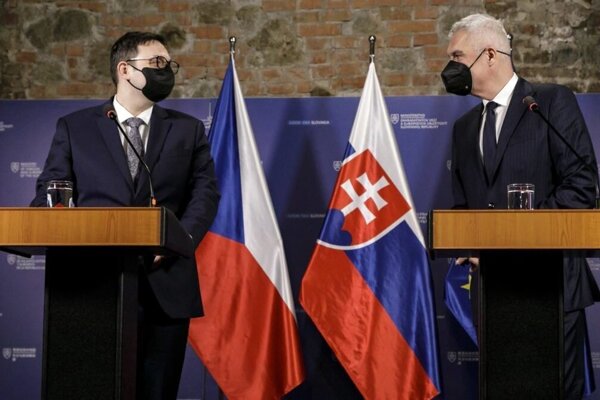 Deescalation by Russia in relation to Ukraine is an essential condition to making a dialogue between Russia and NATO possible, said Slovak Foreign Affairs Minister Ivan Korčok in reaction to Russia's recent proposal of treaties with the US and NATO.

"This concerns the military position as well as the rhetoric we have been hearing from the Russian side with regard to Ukraine in recent days," Korčok said.

The Slovak MFA commented on the latest development during his joint presser with the newly-appointed Czech Foreign Minister Jan Lipavský on December 20. The two ministers discussed, among other things the upcoming Czech presidency of the EU Council and the EU enlargement regarding Western Balkans. It is customary for state representatives of Czechia and Slovakia to pay their first visits in office to one other. Visiting Slovakia on December 20, a few days after his appointment as minister within the government of Petr Fiala on December 17, Lipavský lived up to this tradition.

The two ministers agreed that the latest development between Russia and the US deeply impacts Slovakia and the Czech Republic.

NATO's existence must not be questioned

By mid-December, Russia has moved thousands of troops near Ukraine's eastern borders, prompting questions among observers in the West whether Russian President Vladimir Putin was planning an invasion of Ukraine. Moscow has denied such plans.

Following talks between Putin and US President Joe Biden, Russia came forward with a proposal of treaties with the US and the NATO, outlining its demands of security guarantees. Among the demands is that NATO member states make a pledge to refrain from further enlargement, including the accession of Ukraine. Russia and NATO should also commit themselves to not "deploy military forces and weaponry on the territory of any of the other States in Europe in addition to the forces stationed on that territory as of 27 May 1997." This also regards Slovakia, which only joined NATO in 2004.

Addressing the latest talks between Russia and the US, and the proposed treaties, Korčok said that it is important that countries in the neighbourhood of the Russian Federation are free to decide on their foreign policy orientation, including where they seek security assurances.