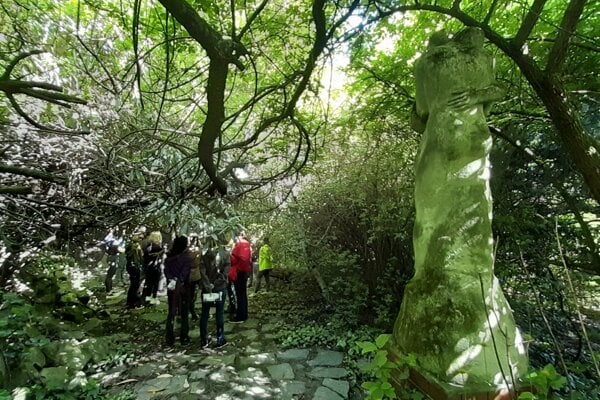 The Koch Garden, the only one of its kind in Slovakia, has been inaccessible and lacking proper maintenance for years. Now it is headed towards a better future.

In late December, the Bratislava city council approved a land swap with the Interior Ministry, whose part is the garden at the Koch Sanatorium in the Old Town. The city plans to revitalise the garden and make it accessible again. At the moment, the garden is opened sporadically, as a highlight of the annual Weekend of Open Parks and Gardens event organised by the non-profit organisation National Trust.

The Koch Garden on Partizánska Street was established in the years 1932-1935, as part of a private surgical-orthopaedic facility founded by physician Karol Koch. The garden, together with the sanatorium, forms a unique whole in Slovakia. The building was designed by architects Dušan Jurkovič and Jindřich Merganc. The garden is the work of Slovak botanist and dendrologist Jozef Mišák, who is also behind the collection of woody plants in the Mlyňany Arboretum of the Slovak Academy of Sciences. His goal was to achieve the garden’s green look all year round, while the slope of the garden and the sanatorium building protecting it from cold winds creates unique microclimatic conditions for growing evergreen plants, as they are not damaged by frost. The garden originally included 120 species of trees.

The organisation, which began organising volunteering maintenance work in the garden in 2008, hopes that the swap will grant the Koch Garden what it has been missing for years – a responsible and caring owner.

“Gardens consist of fast-changing dynamic elements that need regular maintenance by their owner,” Michaela Kubíková, director and co-founder of the National Trust, told The Slovak Spectator. “Since it was unclear who the owner was, the garden quickly dilapidated."

The Koch Garden, sprawling across half a hectare, is an inseparable part of the Koch Sanatorium, which at the time of its establishment in the 1930s was considered the most modern sanatorium in interwar Czechoslovak Republic.