War is not on our minds, Ukrainian students in Prešov say

Prešov's Ukrainian primary and grammar school is one small family, with hassles and first loves. 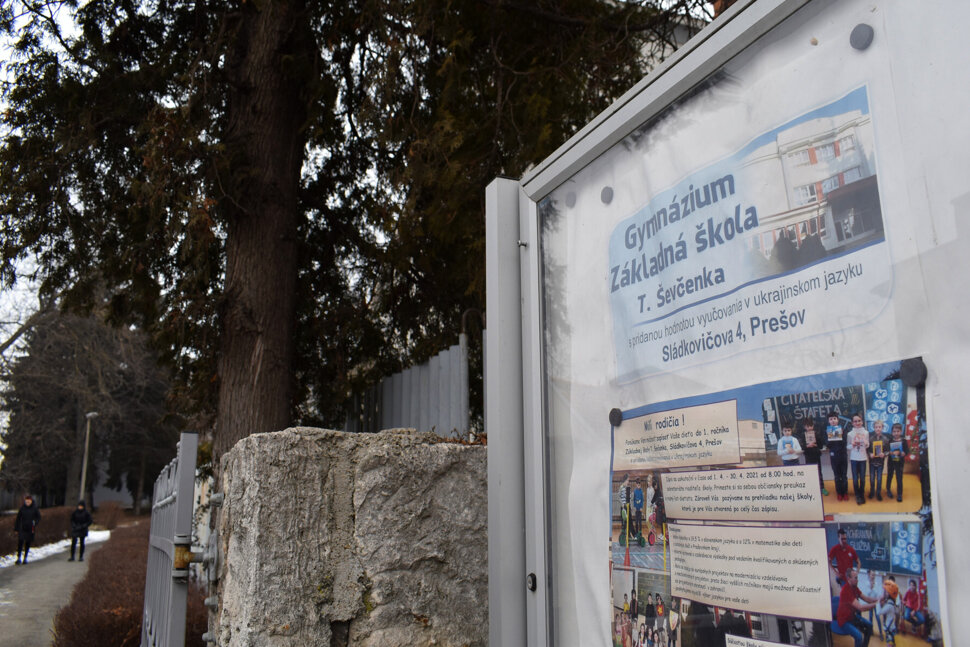 Taras Shevchenko Primary and Grammar School in Prešov is the only school of its kind in Slovakia where the Ukrainian language is the language of instruction. (Source: Peter Dlhopolec for The Slovak Spectator)
Font size:A-|A+  Comments disabled

Fifteen-year-old Ukrainian student Bohdan Voloshanivskyi, seated on a sofa in a school corridor, speaks of his school experience in eastern Slovakia using nearly perfect Slovak when he pauses to think of an adjective to precisely describe it.

After a while, the boy from Vinnytsia, a city that is a four-hour drive to the southwest of the Ukrainian capital of Kyiv, resigns and exclaims in his mother tongue: “Korysnyy! [Rewarding!]”

We [Ukrainians] come from different regions of Ukraine, but there are no conflicts between us.

At Taras Shevchenko Primary and Grammar School in Prešov, where the teenager studies, Slovak children of Ukrainian heritage or affiliated with Ukrainian or Ruthenian minorities and the Ukrainians whose parents have moved to Slovakia for work, study together.

“It is a plus that Slovaks and Ukrainians are in one classroom,” school principal Igor Andrejčák said. “Both groups benefit.”

Out of today’s 283 pupils, nearly 50 percent have Ukrainian parents, according to the principal’s estimate. Most Ukrainian students have come from Uzhhorod and Mukachevo near the Slovak border.

Even if the number of Ukrainians working in the country and Slovak citizens whose ethnicity is Ukrainian has gone up in recent years, the 1936 school – named after the founder of the modern Ukrainian language - remains the sole school of its kind in Slovakia with the language of instruction being Ukrainian.

Voloshanivskyi’s classmate, 16-year-old Timofey Gorbachev from Kyiv, finds it easier to study in Slovakia than in Ukraine, despite a continuous struggle with Slovak grammar.

He has more time to absorb and comprehend new information and can devote even more of it to other activities, such as computer programming or cycling to Kapušany Castle with his little brother.

“In Ukraine, it is all about studying,” said Gorbachev, whose family has lived near Prešov for four years. Voloshanivskyi, who enjoys reading Ukrainian literature and has the ambition of becoming a director one day, nodded in agreement. His family moved to Prešov three years ago. 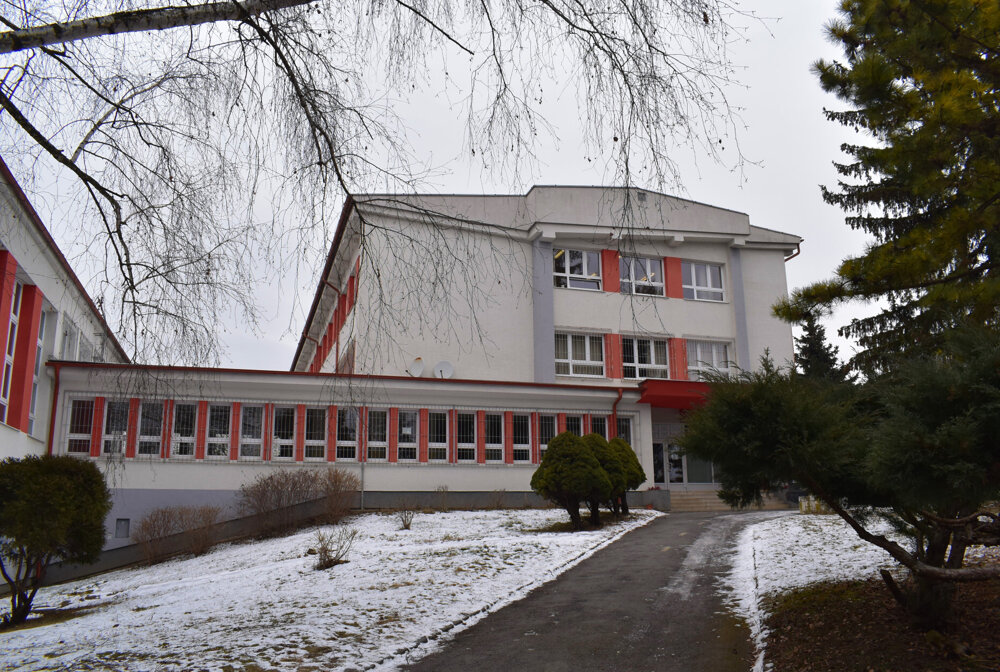 Nearly 300 pupils, Slovaks and Ukrainians, are studying at Taras Shevchenko Primary and Grammar School in Prešov in the 2021/2022 school year. (Source: Peter Dlhopolec for The Slovak Spectator)

The small school retains a family feel though the number of students, especially from Ukraine, has increased in the last decade by almost a hundred. Voloshanivskyi’s and Gorbachev’s younger siblings also attend Taras Shevchenko Primary and Grammar School.

“There is a community spirit everywhere because of family ties among students and the Ukrainian language,” the principal said.

Moreover, the school preserves Ukrainian culture, the students approached by The Slovak Spectator confirmed. “Every time there is a holiday in Ukraine, we celebrate it,” Gorbachev said.

No war, but love

In Voloshanivskyi and Gorbachev’s class, seven out of 21 students are Ukrainian.

They all appear to get along well, even if there is a language barrier between Ukrainians and some Slovaks who joined the grammar school to learn Ukrainian from scratch.

Politics, including tensions between Ukraine and Russia, is a taboo matter in school, according to the principal and Ukrainian students. “We focus on more positive things,” Voloshanivskyi said.

I think this school strengthens in us [Ukrainian minority] what has been given to us and what we were born into.

“We [Ukrainians] come from different regions of Ukraine, but there are no conflicts between us,” Gorbachev added. “We share our experiences and stories.”

However, Andrejčák has noticed “some kind of tension” in several classes. He believes that it is rather innocent and linked to the language and dialects they speak.

“We take them as Ukrainians, but they see themselves a bit differently. When you have a child from Kyiv and Donetsk, their mentalities are not the same,” the principal said.

This is similar to the difference between Slovaks in the east and in the west of the country, he argued, trying to save the situation by saying in one breath that students have found their first loves at school, too.

Ukrainian classrooms in the west

What the principal is not happy about is the limited number of students the school can take in. This impacts the school not only economically but also in terms of students’ inability to take part in different competitions.

“We could accept up to 70 more children,” said Andrejčák, who made the grammar school one of the best in Slovakia in the school year of 2017-2018. 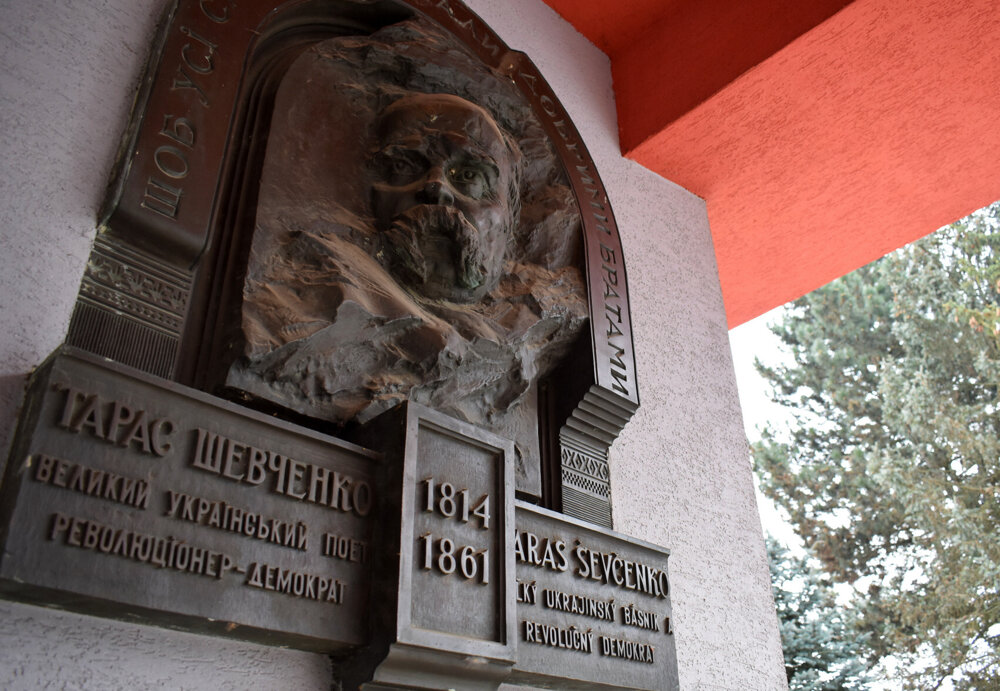 Taras Shevchenko is considered to be the founder of the modern Ukrainian language. (Source: Peter Dlhopolec for The Slovak Spectator)

Today, some Ukrainian parents living in Slovakia send their children for grammar school studies to Prešov even though they work in western Slovakia. “It would be good to set up classrooms with Ukrainian as the language of instruction there,” the principal said.

The Education Ministry told The Slovak Spectator that it is ready to provide cooperation in address a specific situation or requirements in case of demand.

Unlike other schools, Taras Shevchenko Primary and Grammar School does not face a shortage of teachers. Textbooks are a problem, the principal said.

“When you have one school like this, nobody will print out a Ukrainian-language primer, a bukvar in Ukrainian, for 20 children in the first year of primary school.”

Why the Prešov school matters

Zuzana Balenčin, a translation and interpreting student at Prešov University, remembers the bukvar well. This Slovak whose ethnicity is Ukrainian studied at the school from the age of six until her graduation day in 2018.

“It was natural for me to join the school since my whole family had studied there,” she said, praising the teachers’ personal approach thanks to a small number of students.

She fondly remembers her Ukrainian literature and language classes with her teacher Iveta Svitková and St. Nicholas Day, when older students painted children’s faces with coal, gave out sweets and sang the Ukrainian song Oy, Khto, Khto Mykolaya Lyubyt [Who Loves St. Nicholas] in the corridors. 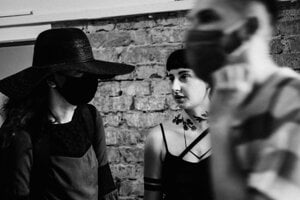 Read also: Bratislava Castle as a tattoo is a cliché, a Ukrainian tattooist says Read more

However, back in Balenčin’s school days, there were not as many incomers from Ukraine as today.

“The school did not primarily serve Ukrainians. The school was for Slovaks to teach them Ukrainian and for the Ukrainian minority,” she said.

The first Ukrainians joined her class when she was in the sixth grade. “There were no conflicts, our relationship was rather neutral,” she recalled. “From what I remember, they had a great time there.”

The student of English and Ukrainian did not realise the value of her Ukrainian heritage in her early years, but she is now thankful for the decision her parents made for her, and that she speaks Ukrainian and knows the history and culture of the Ukrainian nation.

“I think this school strengthens in us [Ukrainian minority] what has been given to us and what we were born into,” Balenčin said. “It’s up to us whether we realise it and whether we will continue to appreciate and preserve it.”