The Smer leader once called Slovakia a ‘pro-European island’. No longer. 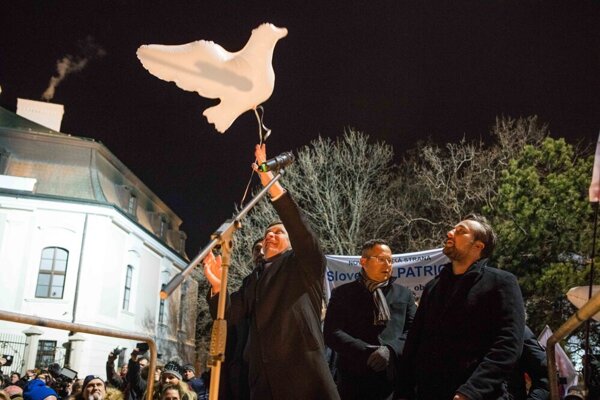 Smer leader Robert Fico and his deputy chairmen with the inflatable white dove they brought to the protest against the government and defence deal with the US. (Source: SITA)
Font size:A-|A+  Comments disabled

Welcome to your weekly commentary and overview of news from Slovakia. Robert Fico’s Smer party has risen to the top of political opinion polls lately, helped by a pronounced pro-Russian turn. Slovakia is turning into Europe’s scrapyard. The Omicron wave is progressing, but rules for crossing borders are easing. Inflation skyrocketed, taking analysts by surprise. MPs will vote on the defence deal with the US this week.

Smer is on the rise, helped by pro-Russian narratives

“We have remained something of a pro-European island in the centre of Europe and it is my wish that this orientation is maintained, because nothing suits Slovakia as much as European integration.”

The year was 2017, Robert Fico was prime minister and together with the then speaker of parliament, Andrej Danko, and president, Andrej Kiska, they overcame their political differences and signed a joint foreign policy declaration expressing full support for the EU and NATO, and for Slovakia’s membership in them. Their statement was in line with what the majority of the Slovak population felt at the time, according to polls.

Back then, Fico as prime minister dreamed – or at least pretended to dream – of Slovakia at the centre of the EU. But when it came to EU sanctions against Russia, he was better known for his Janus-faced declarations: marching in step with other EU leaders when in Brussels, rejecting the sanctions as senseless when at home. This conflicted approach seemed like an obvious attempt to appeal to the sentiments of that large constituency of voters in Slovakia who seem wedded to the idea of this country as a supposed bridge between east and west.