Very few countries have financial statement registers that are as easily accessible as Slovakia's and even fewer have functioning registers of ultimate beneficial owners. 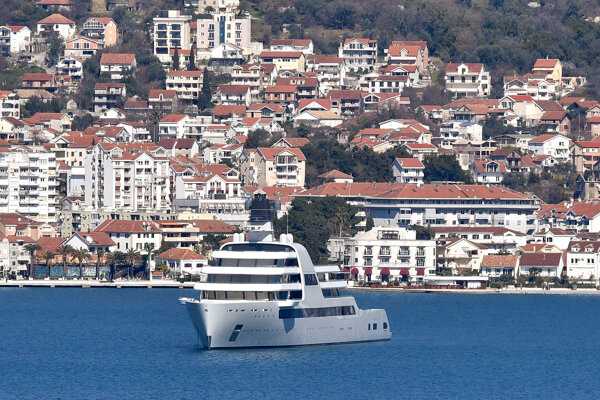 Renáta Bláhová is a tax advisor, a founding partner of BMB Partners TAXAND and a former advisor to the Minister of Finance Eduard Heger

The whole world is watching with horror the absurd war of the Russian aggressor against the democratically oriented Ukraine. The media enthusiastically publish pictures of mega yachts that have been confiscated from Russian oligarchs, and the leaders of many countries are talking assuredly about freezing the assets of the wealthy Russian elite. However, the reality is often different from what the public imagines.

Thanks to existing laws and diverse structures, oligarchs are able to defend themselves effectively against confiscations. The question for European countries is therefore how to introduce an efficient tool for such situations that does not jeopardise the EU's reputation as a region where investments are well protected inter alia from state intervention. It may sound surprising but the solution for European countries would be to adopt into their laws some of the rules that have already been successfully tested in Slovakia.

First, let us have a look at what the real situation is now. The assets of the Russian oligarchs, the hunt for which is at the centre of media attention, are hidden behind layers of fictitious companies registered in tax havens. These jurisdictions are often outside the reach of EU law, and in the case of the US and the UK, several controversial structures are even directly protected by the domestic legal system. This global hunt is further complicated by cryptocurrencies.

Very few countries have registers of financial statements as easily accessible as Slovakia's and even fewer have functioning registers of ultimate beneficial owners, even though the EU anti-money laundering (AML) legislation envisaged a more rigorous approach. Therefore, these countries are usually unable to prove quickly and credibly that a yacht, villa or company belongs to a particular Russian oligarch, even though it may be obvious to the competent institutions or business people.

Whether we are willing to admit it or not, for now, the only real punishment is to impose sanctions, which can be done quickly.

The reality is that even if the targeted assets can be identified and seized, their forfeiture to the state is usually a complicated matter. This is because in EU countries it is an interference with private property rights, against which, of course, every person must be protected.

This usually requires law enforcement procedures as an answer to the violation of AML legislation. Even a temporary seizure often requires a court decision, which can be appealed against. This is a lengthy legal process for which the Russian elite has allocated sufficient resources and secured top lawyers a long time ago.

A typical example of a real-life situation is the well-publicised seizure of oligarch Usmanov's mega yacht. The authorities basically had to confirm that "no yachts were confiscated", and the customs office refused to comment on the situation in detail.

Transnational associations that support the fight for greater transparency understand this paradoxical situation. This is well illustrated by the ten measures recently published by the Tax Justice Network, which, in simple terms, call for the introduction and unification of asset registers and their ultimate beneficial owners, including their global interconnection.

What the EU legislation seeks to achieve

The weakness of European legislation against people who want to hide their assets was, of course, already known before Russia's attack on Ukraine. Experts have addressed this issue, particularly in the context of the drive for fair taxation, where anonymity often helps controversial oligarchs.

Among the initiatives that have emerged in connection to this, I would like to mention at least one recent example that could make a significant contribution to greater transparency – the recent adoption of the draft ATAD III, known as the Unshell Directive, which has not been discussed much in Slovakia yet.

This draft directive is important because it establishes objective indicators that will help to detect shell companies that exist only on paper and whose aim is to hide assets and income.

Under the planned rules, such companies will have new obligations to file tax returns and will lose access to tax relief and protection guaranteed by European directives or double taxation treaties.

This is an important step primarily in the fight against tax avoidance and tax evasion in the European Union. What should it look like? To put it simply, a system that filters entities through three levels of indicators, called “gateways”, will be introduced.

The first level of indicators focuses on the activities of entities based on the income they receive. The gateway is met if more than 75% of the entity's total income in the previous two tax periods does not come from the entity's business activity or if more than 75% of its assets consist of real estate or other private property of exceptionally high value. An example would be a holding company with no active business activities registered in Malta whose only significant asset is a yacht.

The second gateway requires a cross-border element. If a company receives most of its relevant income through transactions linked to another jurisdiction or passes that income to other companies based abroad, the company crosses to the next gateway, if the main income is dividends, for example (we are still looking at the same Maltese company).

The third gateway focuses on whether corporate management and administration services are performed in-house or are outsourced. If the company director is outsourced and provided by a specialised firm, the actual number of hours he spends managing is insignificant.

An entity crossing all three gateways will be required to report more details in a tax return. It will be required to list its registered office, its branches and offices, its bank accounts, the tax residency of its directors and that of its employees, etc. (these are known as “substance indicators”). If an entity fails to meet the substance indicators, it will be deemed a “shell company” and will not be able to access tax relief and the benefits of the tax treaty network of its Member State and/or to qualify for the treatment under EU Directives such as the Parent-Subsidiary or the Interest and Royalties Directive.

The draft of the Unshell Directive has entered the negotiation phase between the EU Member States and should reach a final agreement. It is proposed that Member States transpose the directive into their national legislation by June 30, 2023, so that the rules enter into force on January 1, 2024. Again, this is a lengthy process and, moreover, it is still not ambitious enough to link to the objectives of AML legislation, as it does not foresee a link to global asset registers or ultimate owners.

What could be done?

I think it could be done more efficiently if the draft Unshell Directive were extended by a number of additional obligations, including the publication of financial statements and nexus to the register of ultimate beneficial owners.

The main advantage of these measures is that in addition to increasing transparency, information on the performance of firms and their owners is collected and verified in various ways on an ongoing basis. When public authorities need it, as they do now in a state of war, the information is available immediately.

Both measures have been implemented at a high level in Slovakia, which significantly simplifies the investigative work of any institution including state authorities. This can be seen, for example, in Finstat, whose database based on public sources allows for simple filters, including foreign capital and the value of assets.

It may sound surprising, but in Austria or Germany, you cannot do this kind of analysis so easily.

What is possible under the Slovak laws now?

Thanks to the mandatory publication of financial statements of all companies registered in Slovakia, important data on the business activities and assets of entrepreneurs is available.

However, of essential importance is the information on the beneficial owners, the individuals who actually control the entities or benefit from their activities. Slovakia and Denmark were the first EU countries to introduce a public register of ultimate beneficial owners. In Slovakia, we launched it on November 1, 2015. Primarily, it is a source of information on entities that acquire public assets or draw funds from public resources within the financial limits set by law.

Valuable information is also provided by the Register of Legal Entities, which is a source of legally valid data on legal entities from more than a hundred source registers and records of various information systems. These registers and the information contained therein could be a very good basis for cutting off Russian oligarchs from public resources, as they enable users to obtain relatively accurate and up-to-date information on the actual ownership structure of business entities.

It is, of course, a task for the tax administration to find out whether controversial entrepreneurs meet their tax obligations. In the weeks to come, we will learn whether the Slovak government is able to push through further necessary legislation. Whether peace-respecting entrepreneurs and customers remain in contractual relationships with those whose major source of funding is the Russian market is entirely an ethical decision for each of us.

In any case, given this extraordinary moment of closeness among European leaders, there is an exceptional opportunity for a strong push for more efficient and transparent rules.