The Slovak-Austrian section of the EuroVelo 13 cycle route offers history and nature as well as gastronomy. 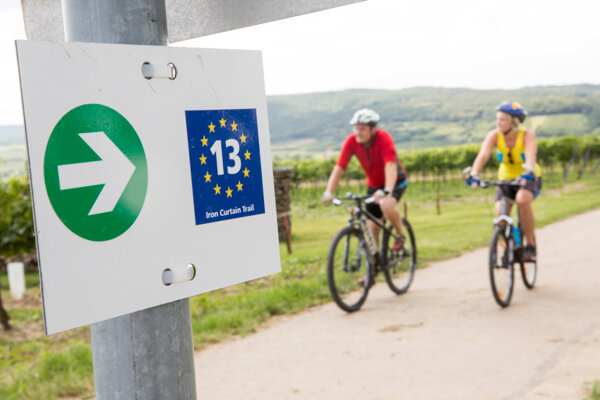 The Iron Curtain Trail EuroVelo 13 is a long-distance cycling route 10,400 km long and connects the Barents and the Black Sea along the line of the former Iron Curtain. (Source: Courtesy of WTG)
Font size:A-|A+  Comments disabled

Wolfgang Gaida, the 52-year mayor of Hohenau an der March, an Austrian village lying on the border with Slovakia, used to swim as a boy with his friends in nearby Morava river. They knew that there was a border line in the middle and that they could not cross it.

“There was another world on the other side of the Morava; we heard gunfire at times,” Gaida told The Slovak Spectator when recalling life on the free side of the Iron Curtain.

During his grandparents' era, when Slovaks from the other side of the Morava used to commute to the local sugar factory, a mixed population lived here. His grandparents still spoke Slovak. His father, who was born in 1943 and witnessed the raising of the Iron Curtain, still understood Slovak but no longer spoke it. There was no one to speak it with. The Iron Curtain brought lively cross-border life to an end. Out of five bridges on the Slovak-Austrian section of the Morava, one remained, near Hohenau.

They found out how life looked beyond the Iron Curtain when it was pulled down in 1989.

“Finally we could fully imagine how people lived on the other side, that there was a barbed-wire fence and patrols,” said Gaida. “Only then did we entirely realise how terrible it had been.”

For 33 years since the fall of the Iron Curtain, it has been possible to visit the river or bathe in it from the Slovak side as well. But even today, Gaida shudders when he makes his traditional cycling ride from Hohenau to Angern and back. He goes to Angern along the Slovak bank of the Morava via the EuroVelo 13 cycle route, the Iron Curtain Trail. Here he takes a ferry over the Morava to get to the Austrian bank and returns home.

“When I see bunkers and remnants of the Iron Curtain on the Slovak side, I still have such a strange, somewhat anxious feeling,” said Gaida.