For financial aid and Fico, the coalition might fail

OĽaNO claims SaS is going to quit. SaS says it's not, but Sme Rodina should. 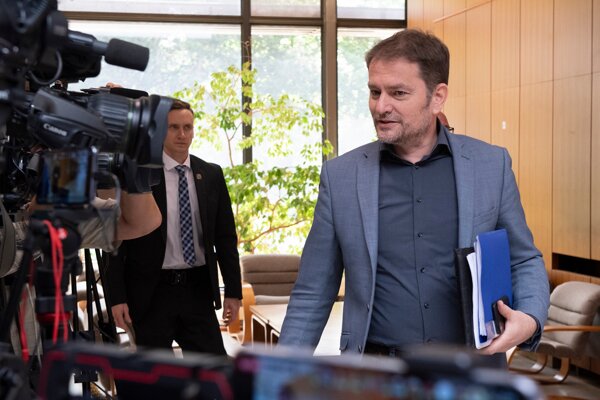 The ruling coalition is once again on the edge of collapse, just a year after a major government crisis erupted after the purchase of a Russian Covid-19 vaccine and growing tensions between OĽaNO leader Igor Matovič and SaS leader Richard Sulík.

Matovič, a finance minister who was prompted last year to resign as Slovakia’s PM to extinguish the crisis, claims that Sulík, the country’s economy minister, will announce his party quitting from the four-party coalition on Wednesday, May 11, citing some SaS sources.

“We are not the ones who want to leave the government, nor are we the ones who should leave it,” Sulík said in response to Matovič’s statement, claiming that Matovič is attempting to divert people’s attention from his recent “biggest” political loss.

The crisis arose on May 4 after the parliament, with the blessing of then two OĽaNO MPs and MPs from the coalition party of Sme Rodina, dismissed via voting a prosecutor’s request for the arrest of Smer MP and former triple prime minister Robert Fico, against whom several criminal charges had been pressed.

“OĽaNO can no longer speak on the fight against corruption,” Sulík said after the vote. He added that Matovič’s “favourite coalition partner”, Sme Rodina, shot down the finance minister’s anti-corruption and anti-Fico battle.

“Sme Rodina did not betray the coalition when voting on Fico,” the party’s leader Boris Kollár responded, saying that his party had notified its partners that it would abstain from the vote.

Unlike SaS, OĽaNO and Sme Rodina do not see the vote as a tragedy because law enforcement can still act against Fico.

Following Sulík’s criticism, Kollár and Matovič made sure to remind him that it was his party that paved the way for Fico’s years-long rule in 2012 after it ignored the vote on changes to the European bailout mechanism, and the centre-right government of Iveta Radičová subsequently fell. Matovič, who served his first term as an MP after he made it to parliament on the SaS slate, did not take part in that decisive vote.

But the finance minister’s announced package of economic and social measures to help people cope with rising prices, disfavoured by SaS to a large degree and supported by Sme Rodina and Za Ľudí, has aggravated the coalition crisis in recent days.

Asked about the coalition’s possible end, political analyst Grigorij Mesežnikov of the non-governmental Institute for Public Affairs told The Slovak Spectator, “The probability is not zero.” This prospect has been around for some time, he added.