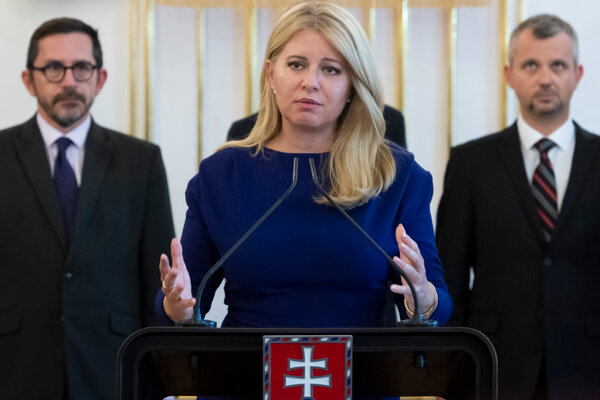 Slovaks will again cast their votes in a referendum following a decision made by President Zuzana Čaputová.

“A referendum will take place, with one question at least,” she said on September 12.

1) Do you agree that the government of the Slovak Republic should immediately resign?

The opposition parties Smer, Hlas and the extremist party Republika delivered petition sheets with 381,960 valid signatures to the Presidential Palace on August 24, asking the head of state to call a referendum with two questions.

The three parties want to achieve the fall of Eduard Heger’s government through the first question. With the second question they want the adoption of a constitutional change, making it possible to shorten a parliament by referendum or by the parliament’s decision, and enabling a snap election.

“The second question is in accordance with the constitution,” the president said.

A recent Constitutional Court ruling said that such a constitutional change is necessary if MPs decide to shorten a parliament.

First question may be an issue

The first question is under dispute, the president said. Therefore, she will turn to the Constitutional Court to decide whether the question regarding the resignation of the current government is in line with the constitution.

“If the Constitutional Court says the question is constitutional, I will announce the referendum with two questions,” the president said.

She stressed the importance of honouring and respecting the constitution, which recently marked its 30th anniversary.

Čaputová added that even if the first question were approved by the court, the referendum successful, and the government fell, it would not lead to a snap election.

“I can appoint a new government or a caretaker government,” she said.

The president went on to say that the referendum will happen after the regional and municipal elections, held on October 29, to meet all her deadlines set by legislation.

The referendum should be announced after the Constitutional Court issues its decision on the first question. According to Čaputová, she will set the date by the end of this year.

Moreover, she thinks that she will again face a smear campaign from the opposition because of her decision to turn to the court.

“Citizens have made it clear that they want early parliamentary elections and a change of government as soon as possible,” Smer chair Robert Fico said in August. “The president has already thwarted a referendum once.”

He referred to the president’s decision to not call a referendum last year after the Constitutional Court ruled that Smer’s referendum question was unconstitutional.

“It’s nonsense,” she said on Monday in response to previous accusations that she would want to thwart a referendum.

There have been eight referendums held in Slovakia to date, but just one was successful. In 2003, Slovakia agreed to the country joining the EU.

It did not take long for Fico to respond to Čaputová’s announcement. He accused her of not calling the referendum on October 29 on purpose because, according to him, she knows it would be a success.

“I don’t know what is unconstitutional about the question through which people want the broken, incompetent and anti-Slovak government to leave,” Fico continued, noting the argument that the government must complete a four-year term is authoritarian and undemocratic.

The president has thwarted the second referendum in a row, he said in a video on Facebook.

“Zuzana Čaputová is not the president of all Slovak citizens. She polarises society” the Slovak National Party said, adding that the president is prolonging the agony of this government.

The Hlas party, led by ex-PM Peter Pellegrini, also criticised President Čaputová for her intention of turning to the Constitutional Court in this matter.