Slovenská Pošta also used an image inspired by the war 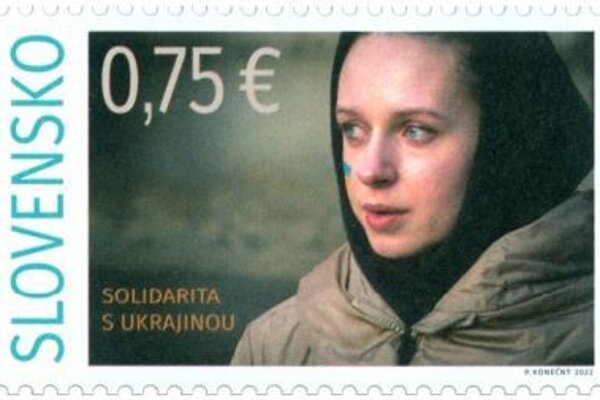 The state-owned postal service Slovenská Pošta has released a stamp symbolically named “Solidarity with Ukraine”. The stamp captures the portrait of a weeping Ukrainian refugee who has found asylum in Slovakia.

At the beginning of Russia's invasion, more than 10,000 Ukrainians fled over the border into Slovakia every day.

Over 90,000 people have received temporary protection status in Slovakia. The status is intended for citizens of Ukraine and foreigners with legal residence in Ukraine, granted as soon as they cross the border to Slovakia.

Along with the stamp, an official “Solidarity with Ukraine” envelope and an impression are announced for release, Slovenská Pošta wrote in its press release.

The motif for the envelope is a winning gesture with detached fingers as a metaphor for victory and sacrifice. The impression bears a ship, a metaphor for the sunken Russian warship near Snake Island, created by a Ukrainian artist based in Slovakia, Mykola Kovalenko. The creators were chosen from a circle of Slovak and Ukrainian artists. The stamp was created by Peter Konečný. The “Solidarity with Ukraine” postal package is set for a release on September 16, 2022. The nominal price for the stamp is set for €0.75.