BORSÓ hill used to be known as a stop on a medieval north-south trade route linking Hungary and Poland. The name means "wine-salt," after the commodities that were exchanged. 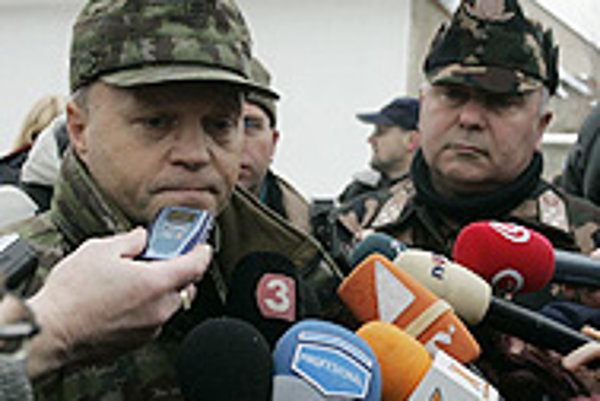 Font size:A-|A+0
BORSÓ hill used to be known as a stop on a medieval north-south trade route linking Hungary and Poland. The name means "wine-salt," after the commodities that were exchanged.

From now on it will be known as the site of the worst airline disaster in Slovakia's history, in which 42 soldiers and crew were killed on their way home from a mission in Kosovo, minutes from a scheduled landing in Košice.

The crest of the 700-metre Borsó hill is covered by a mature beech forest. Now the forest is blighted by a swath of charred and broken trees some 40 metres wide and 500 metres long.

When journalists arrived on the scene, transported in the backs of Hungarian army trucks, wreckage from the crashed plane was scattered among the tree stumps. Rescuers and soldiers were busy collecting bodies and piling them together in one place. None of them felt like saying a single word.

The An-24 Ukraine-made military plane crashed here at about 19:30 on January 19, killing 42 of the 43 people on board. Only one soldier survived the crash.

The Slovak authorities are now studying the aircraft's black box to determine the cause of the accident. Those who witnessed the crash site could not avoid thinking that if the plane had been flying even 20 metres higher it would have cleared the tops of the trees and been within sight of the Košice airport.

On January 20, the local cultural centre in the north-east Hungarian village of Hejce opened an exhibition of Hungarian amateur painters. Dozens of Slovak and Hungarian journalists descended on Hejce that day, but they had not come for the art. Hejce became a local operations base for media reporting on the crash.

"During the day we had over a 100 journalists here and about 400 soldiers and rescuers," said Hejce Mayor Géza Rohály. The village provided the visitors with hot tea and coffee, sandwiches and goulash. Local residents also carried hot beverages to rescuers in the forest. The municipality paid for the refreshments while 30 volunteers - one tenth of the local population - prepared food non-stop.

One of the reports journalists heard at Hejce was from Slovak Army Chief of Staff Ľubomír Bulík, who had just returned from the crash site with his Hungarian counterpart, General András Havril.

"I regret to confirm that with the exception of one soldier, all the other soldiers on board died during the crash," Bulík said.

"All the dead have been identified, and upon agreement with the Hungarian side we are transporting them to Slovakia," he added.

The only break in the tragic atmosphere was the miraculous fortune of First Lieutenant Martin Farkaš, the sole survivor, who escaped without serious injury beyond a concussion.

"He was sitting on a piece of wreckage, he was wounded and evidently in deep shock, but he was trying to communicate," recalled Emma Kormosová, one of the rescuers, describing the moment when a Hungarian doctor and police discovered the survivor.

Farkaš managed to contact his wife Michaela on his mobile phone before rescuers arrived, and asked her to call emergency services. Before he lost the mobile signal, he was able to tell her that he was somewhere in the middle of a forest.

Farkaš was one of the youngest officers on the KFOR mission in Kosovo, his first foreign posting. The Poprad-born soldier is from the Levice unit.

In the days that followed the crash, the Slovak public learned the identities and backgrounds of the soldiers who had died, most of whom were young and from the east of the country.

"The average age of our 99-member contingent is 29 years, while the youngest soldier is 22-year-old Jozef Gábor from the Trebišov mechanized battalion. The oldest member of the team is Colonel Martin Haber of Liptovský Mikuláš, the unit's doctor, who was born in 1948," said human resources officer Jana Peštová when introducing the unit last summer.

Colonel Haber, who the Army said had been popular among the Serbian locals in Kosovo because of the care he provided them, was one of the victims of the crash. He had wanted to end his military career by serving on a foreign mission.

Jana Peštová, who was one of three women serving in the Kosovo unit, also did not make it home. The 27-year-old hailed from Zvolen, and with her husband had hoped to be transferred from the Kosovo mission so the couple could have a child.

Lieutenant Colonel Ľuboš Balucha never returned to his three daughters either. A soldier through and through, the Prešov-born Balucha began his military career from 1973-1983 at the Banská Bystrica Military Secondary School. After several postings he was made chief of the mechanized brigade in Prešov.

"It was a very responsible and honourable post, but I wanted the experience of serving abroad, so I applied for the mission," Balucha was quoted as saying in an earlier media report.

Colonel Marián Illéš, deputy company commander, joined the army because his brother was a professional soldier. After he was posted to Trebišov, he used to see his family in Leles only at the weekends.

"Finally we moved to Trebišov, and it was a great feeling to be able to spend the evenings with my family. However, we didn't enjoy a normal family life for long, because I was posted to Kosovo," he said before the crash.

Illéš said he planned to repay his wife and daughter for the time they had spent apart after his return to Slovakia.

He, too, died on his way home.

THE SLOVAK peace-keeping unit became part of KFOR (Kosovo Force) in September 1999. It operated within the German sector and the unit was based in the Casablanca camp close to the town of Suva Reka.
Former Czech and Slovak Defence Ministers Jaroslav Tvrdík and Jozef Stank decided in 2001 to create a joint unit for Kosovo. It was an important step in Slovakia's preparations for joining NATO.
Approximately 400 Czech and 100 Slovak soldiers started to operate as the 1st Czech-Slovak KFOR battalion in Kosovo on February 19, 2002.
In July 2005 Czech and Slovak Defence Ministers Juraj Liška and Karl Kuhnl announced the end of the operation.
The 99-member Slovak unit was re-directed under the command of the multinational brigade Center, although the Slovak and Czech soldiers continue to share a camp in Sajkovac.
There are 17,000 soldiers from 35 countries serving in the KFOR operation. Liška decided to send an additional 35 soldiers to Kosovo this year.
In December 2005, Minister Liška and Chief of Staff of the Slovak Army Ľubomír Bulík, visited the soldiers and awarded them NATO medals granted by NATO Secretary General Jaap de Hoop Scheffer.
Approximately a month later, on January 26, the three representatives met again at the burial ceremony for the 42 soldiers killed in the plane crash.