A PACK OF noisy English-speaking tourists knocked over one of Bratislava's best-known attractions, the Schöner Nazi statue near the Main Square, in the early morning hours of May 22. The hooligans destroyed the figure's left hand, which holds his trademark tophat, its right hand and its footstall, with the damage estimated at Sk100,000. 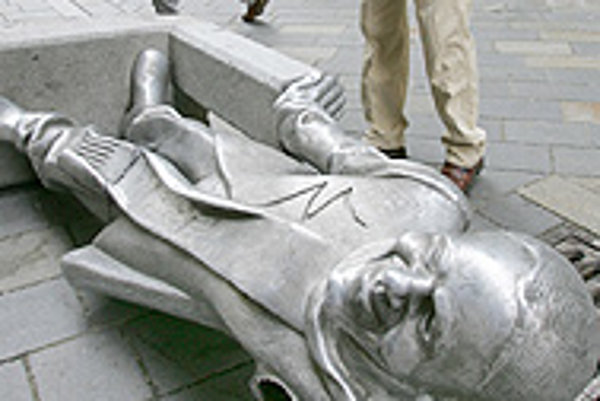 Font size:A-|A+  Comments disabled
A PACK OF noisy English-speaking tourists knocked over one of Bratislava's best-known attractions, the Schöner Nazi statue near the Main Square, in the early morning hours of May 22. The hooligans destroyed the figure's left hand, which holds his trademark tophat, its right hand and its footstall, with the damage estimated at Sk100,000.

While city police are checking security camera footage to track down the culprits, the incident has angered many local citizens who are weary of packs of vulgar and drunken foreigners roaming the capital on weekends on cheap 'stag party' trips.

Last year, more than 60,000 British tourists visited Bratislava. Only a small percentage were attending stag parties, but Bratislavans nonetheless reported seeing drunken Brits commit a series of offences, such as performing obscene acts on a model cow that stood in front of the downtown Tesco building as part of the international CowParade project, urinating into city fountains, taking off their clothes in the middle of city streets, and harassing local women.

"We need to stand up to them very sternly or they'll wreck our city," Čiernik told the SITA news agency on the day the statue was knocked over.

Following the incident, Bratislava will be seeing more weekend police patrols. The town council also plans to request that hotels and restaurant owners inform police of the arrival of large groups of young tourists.

The city's authorities are also working hard with the British Embassy to avoid offending anyone or giving the impression that Bratislava does not want tourists.

"These tourists are not unwelcome," Bratislava City Head of Communications Milan Vajda told The Slovak Spectator.

The British deputy ambassador to Slovakia, Tom Carter, explained that many of the incidents can be attributed to a small percentage of British visitors who specifically head to Bratislava for alcohol-loaded weekends, known as stag and hen parties, before tying the knot back home.

"The vast majority of these parties go on without problems," he said.

This is not the first time young British lads have invaded a country seeking attractive and cheap places to drink. After Barcelona, Amsterdam, Prague and the Baltic cities, Bratislava has been dubbed the latest "stag party capital for 2006".

The British media has said that, along with cheap beer and accommodation, the Quentin Tarantino-backed slasher film Hostel, which was criticized by Slovaks for its nightmarish portrayal of the country, helped raise Slovakia's profile. The firms that organize the stag parties also use the lure of the country's "beautiful women".

The Brits are usually accompanied by female guides during their daytime activities, which include shooting in quarries, go-karting and paintballing, as well as visits to pubs and strip bars.

According to the British daily The Observer, an estimated 70 percent of UK stag parties take place abroad. Of those, one in four participants ends up in trouble due to lost money or travel documents, alcohol poisoning or vandalism.

The daily reported that to combat the phenomenon, British MPs had recently called for people who get into trouble abroad to be forced to pay for help from British officials. Diplomats abroad were advised to fine those who turned up at their embassy's doorstep "drunk, incoherent and lost".

But Carter and city council head of communication Vajda suggested that the bigger picture should be kept in focus.

"Yes, some do run into trouble. Lost passports and lost money is the most common problem. But we are not aware of any stag or hen partygoers being arrested while in Slovakia," Carter said.

"The number of British visitors to Slovakia has almost doubled in the two years since Slovakia joined the EU. That is very good news indeed for the Slovak tourist industry. They come because of the wide selection of tourist attractions - historic towns and castles, mountains offering skiing and hiking, pristine nature, and so on," he continued.

Carter explained that Bratislava had become more popular due to the availability of low-cost flights - some six direct flights to Bratislava currently run from UK airports every day - the comparatively low cost of accommodation, food and drink in Slovakia, and the warmth of the reception they are given by Slovaks themselves.

British visitors also tend to spend freely, which is good news for the hotel, bar and restaurant industries, he added.

Vajda agreed that such tourists have "strong purchasing power", adding that the city rejoices in the increased tourism from Great Britain. Stag party tourism is a phenomenon that many other European countries have been experiencing over the years and, according to Carter, the tradition seems to be growing in popularity.

"For our people, alcohol also plays an important role at stag parties," said Vajda, explaining that it was difficult to deter firms from organizing stags abroad. "It's better to keep them promoting the town."

However, Carter said, the British Embassy is aware of the need to continue working with UK and Slovak authorities on solving the issue. At the local level, it has initiated a dialogue with the Slovaks on how best to manage the issue of rowdy stag and hen parties, and hopes to see results soon.

Carter also said that the Foreign and Commonwealth Office has just published a new guide for Britons travelling abroad to advise travellers on how to avoid trouble when abroad.

"The key is to behave in an acceptable way, and to respect local laws and customs," Carter said.

"We hope the number of British tourists visiting Slovakia will continue to increase, but we want it to be responsible tourism."