Return of the Roma Holocaust?

"UNFORTUNATELY, there are blots on European history that could not be talked about in the past. I am glad that we've started to talk about them. And one such blot is the Roma Holocaust," said Ágnes Bíró, the state secretary at the Slovak Culture Ministry.
Sixty years after the end of World War II, Slovakia still knows little about the Roma Holocaust. The number of victims can only be guessed and its relevance is only slowly entering society's consciousness.
Experts say knowing what befell the Roma between 1939 and 1945 could lead to better understanding and help to soothe the anti-Romaism that remains not only in Slovakia but across Europe. 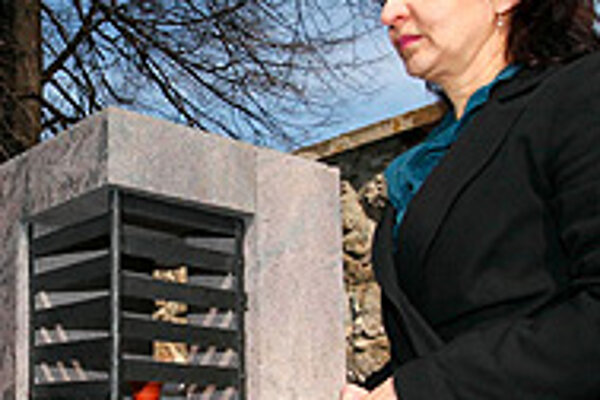 Font size:A-|A+  Comments disabled
"UNFORTUNATELY, there are blots on European history that could not be talked about in the past. I am glad that we've started to talk about them. And one such blot is the Roma Holocaust," said Ágnes Bíró, the state secretary at the Slovak Culture Ministry.

Sixty years after the end of World War II, Slovakia still knows little about the Roma Holocaust. The number of victims can only be guessed and its relevance is only slowly entering society's consciousness.

Experts say knowing what befell the Roma between 1939 and 1945 could lead to better understanding and help to soothe the anti-Romaism that remains not only in Slovakia but across Europe.

Humanity has been learning about the atrocities committed against the Roma since the 1990s, as historians, sociologists and ethnographers began investigating the issue and presenting their findings to the public.

Two months ago, their effort made major political headway in Slovakia. For the first time in the country's history, a member of the Slovak government apologised to the Roma for their suffering during the war.

"I deeply regret the repression between 1944 and 1945 that the government of the then Slovak state exacted upon the Jewish nation and namely against Roma nation, only because they were different. Though the current Slovak Republic has no connections to the war-time state, I would like to apologize in the name of the government for the injustice committed on minorities during the World War II, and ask the families of the survivors for forgiveness," Deputy Prime Minister Pál Csáky said on April 8.

Csáky made the comments on the International Day of Roma while unveiling a memorial to Roma victims buried in the Jewish cemetery in Zvolen.

"It's one result of recent Slovak politics towards the Roma issue," Klára Orgovánová, the cabinet appointee for the Roma community, commented.

She calls it a good beginning in the attempt to understand Roma history. She also supports collecting facts on the holocaust and establishing a documentation centre to map the period, and has called for the Roma who suffered to be compensated in "a more concrete form".

This is part of the Ma bisteren! (Let's Not Forget!) project organized by the In Minorita civic association and the Slovak National Museum. The activists install similar commemorative plaques in localities where Roma persecutions took place. At the same time, they raise awareness on the theme with a travelling exhibition about the Roma Holocaust and hold seminaries on the issue.

One such seminar took place on June 20. Under the title Un-confessed Roma Holocaust, invited experts pointed out that information on the Roma Holocaust is being gathered, but a complete understanding of the impact of the atrocities still has a long way to go.

"So far we have talked about the Roma Holocaust as an 'unknown'. The documents are being discovered and information is added. The sector in which the Roma Holocaust remains most unknown is social acceptance," said ethnographer Zuzana Kumanová, one of the Ma bisteren! project organizers.

Experts agree that the change should begin in schools. However, decades of silence will take a long time to correct.

One of the lecturers at the seminar was Professor Ctibor Nečas, who teaches philosophy at Masaryk University in Brno, and has been exploring Roma history for 30 years. Nečas believes that "whoever finds a formula for the peaceful coexistence of Czechs [as well as Slovaks] and Roma deserves a Nobel Prize".

Nečas talked about the horrors Roma were subjected to between the 1930s and 1940s, such as being deprived of their nomadic life, being sent to labour camps, and extermination.

The largest Slovak labour camp, which later became a detention camp, was in Dubnica nad Váhom. Entire Roma families were sent there in 1944. The total number of people interned there is still unknown, but what existence was like there can be illustrated by the fact that 26 prisoners were once shot for contracting typhus.

Nečas also mentioned the massacres in the Roma settlements of Valaská Belá, Čierny Balog, Žiar nad Hronom and others. "Men were executed on the spot. Others were transferred to execution locations [such as Kremnica] to be killed there."

Altogether, the number of victims of the Roma Holocaust is estimated to be over 300,000.

According to social anthropologist Martin Fotta from the Milan Šimečka Foundation, which has interviewed Roma survivors of the Holocaust and mapped their stories, Roma were primarily targeted for their asocial behaviour rather than racial discrimination.

"'Gypsies' were considered innately asocial. The camps were set up to "correct" that," Fotta says.

Moreover, he adds, nobody was sentenced during the Nuremberg Trials for persecuting the Roma, and the idea of compensation was rejected because the Roma were persecuted on a social, not racial, basis.

"Eyewitness testimony by survivors was rejected and anti-Roma stereotypes were perpetuated at a time when anti-Semitism was officially taboo," Fotta said.

Support eventually arrived from the Jewish community, when Simon Wiesenthal, the famed Nazi hunter, began to collect documents at the beginning of the 1960s to prove the Roma Holocaust, and personally intervened in acknowledging it as a historical fact.

"Researching the Roma Holocaust can help us to understand the mechanism of creating a collective historical memory and identity," he said.

Fotta and other experts warn that anti-Romaism is still heavily entrenched in the societal prejudices.

"Antigypsyism is still the root of discrimination against Slovak Roma. One piece of evidence was the government's attitude toward the sterilisation of Roma women, and how it threatened the organisations that brought this to the public. Surprising was the apathy of politicians, namely the Christian Democrats, and other organisations that under other circumstances try to limit reproductive rights [i.e. are against abortions, contraceptions, assisted reproduction] but, suddenly, were quiet when women from the lowest social level were forcibly sterilised.

"This would be impossible if antigypsyism weren't deeply rooted, and we were aware of the history of the Roma Holocaust," Fotta said.

The ethnographer Kumanová also warns that the marginalisation the Roma population continues to experience is dangerous.

She remembers watching a video in the Milan Šimečka Foundation about Roma persecution. A boy told a story about a group of soldiers during the war who were drinking beer and put a cigarette butt into one of the glasses, then forced him to drink it.

"It's a story that tens of children from Roma settlements can tell you even today. The marginalisation has always been here, and when the social scissors open too wide and the Roma remain on the edge of society, even latent racism has the chance to break out and rear its ugly head."