Štefánik, Gauguin and Tahiti at GMB

In the early 1890s painter Paul Gauguin traveled to the South Sea island of Tahiti to seek inspiration. Before he died in 1903, he had created his greatest work there. 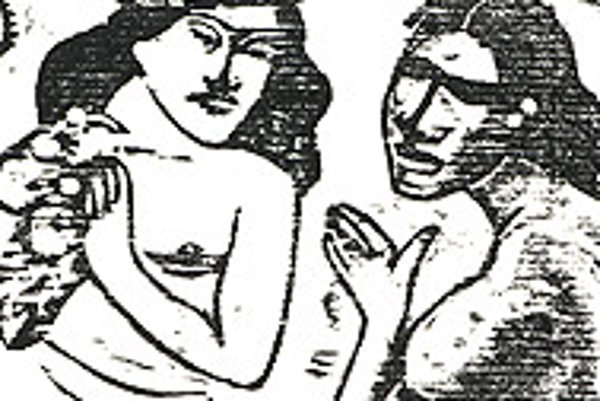 Font size:A-|A+  Comments disabled
In the early 1890s painter Paul Gauguin traveled to the South Sea island of Tahiti to seek inspiration. Before he died in 1903, he had created his greatest work there.

Twenty years later, the politician, diplomat and astronomer Milan Rastislav Štefánik journeyed to the same place, ostensibly to get a good view of Halley's Comet, but also to search out traces of Gauguin. Štefánik, a serious art collector, had grown to admire Gauguin after viewing his paintings at a 1906 Paris exhibition. During his stay on the island, Štefánik discovered 11 original matrixes by the French painter.

Matrixes are drawings carved in wood so that the images can be graphically replicated by stamping them on paper.

"To mark the anniversary of Štefánik's death we planned to organise an exhibition that would introduce his multi-dimensional personality," said exhibition curator Hana Vaškovičová. The exhibit presents Štefánik not only as a national hero but also as an art collector, world traveller and an admirer of Polynesian culture.

The exhibition Gauguin, Štefánik and Tahiti in the Bratislava City Gallery's Pálffy Palace reveals much about these two men and their relationship to Tahiti, an island renowned for its scenic vistas as well as the exuberant natural beauty of its women.

Prints from the original matrixes were first shown in 1969, but now the organizers have decided to present a more comprehensive exhibition.

"We wanted to present Štefánik as a collector of Gauguin's original matrixes, which are, alas, in bad condition and are not listed in any catalogue," added Vaškovičová for the Sme daily.

Following the discovery, Štefánik brought the matrixes to Paris, where he attempted to sell them but failed. Afterwards he asked his friend, Czech graphic artist TF Šimon, to repair them and make prints. Šimon made several series of graphic prints, some of which wound up in the Albertina in Vienna.

The display showcases 26 graphic works and documentary materials including photos Štefánik took on the island and a model of Štefánik's monument by Bohumil Kafka and others.

What: Štefánik, Gauguin and Tahiti
Where: City Gallery of Bratislava, Pálffy Palace, Panská 19
When: Tue-Sun 11:00-6:00 until September 10.
www.gmb.sk