IT IS a documented historical fact that the government of the Nazi puppet Slovak state in the Second World War sent over 70,000 of its Jewish and Roma citizens to their deaths in Nazi death camps. 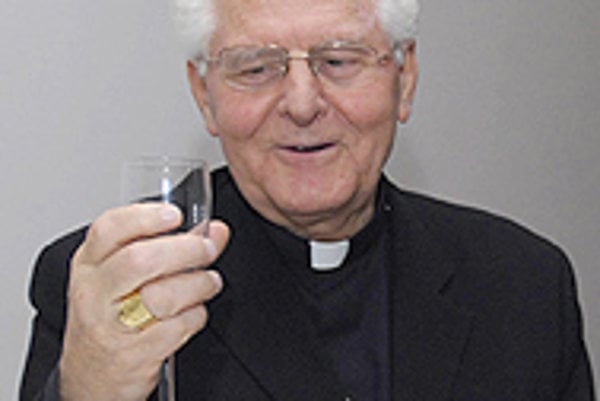 Font size:A-|A+
IT IS a documented historical fact that the government of the Nazi puppet Slovak state in the Second World War sent over 70,000 of its Jewish and Roma citizens to their deaths in Nazi death camps.

Still, some church and political leaders in Slovakia continue to defend the founding of the 1939-1945 state as an act of political necessity, and to regard Slovakia's wartime president, the Catholic priest Jozef Tiso, as a defender of ethnic Slovaks.

Archbishop Ján Sokol became the latest public figure to praise Tiso and the Slovak wartime state during a December 27 interview with the TA3 news channel.

"I appreciate President Tiso. I appreciate him very much because we were affluent then. We lacked nothing during the war," Sokol said.

"I remember that in my childhood we were very poor, but when he was [president] we really had class," the archbishop added.

Sokol was savaged in the press for the comments, among others by representatives of Slovakia's Jewish and Roma communities.

Ladislav Richter from the RMORK Roma community group sent an open letter to Sokol in which he asked him "whether by affluence he meant the times when Roma were banned from using public transport or entering public parks, buildings, and many stores".

Pavel Traubner, honorary chairman of the Union of Jewish Communities in Slovakia, said that Sokol had ignored the fact that any prosperity during the war had been bought with the lives of thousands of Slovak citizens.

"The archbishop certainly forgot that many citizens of this allegedly prosperous nation suffered, and that 72,000 of them were deported to concentration camps, where they not only starved but died. I personally don't think that we should celebrate and promote a state that allows the majority to live in comfort while the rest are sent to die."

The archbishop later appeared to retreat from his position, with his spokesman, Tibor Hajdu, saying that Sokol had not been defending the negative aspects of the wartime Slovak state.

"The archbishop rejects and distances himself on principle from any injustice or breach of human rights committed during the existence of the wartime Slovak Republic," Hajdu said.

However, the retraction did nothing to soften the impact of Sokol's televised comments on the nation and its political leaders. While leftist PM Robert Fico said in an official statement that Tiso had been "responsible for the deportation of Slovak Jews and Roma, including children and old people, to death camps" during the wartime period, Fico's partner in the red-brown ruling coalition, far-right Slovak National Party (SNS) leader Ján Slota, took a different stance.

"The archbishop was right in that during the war, 200 new industrial plants were built in Slovakia along with 400 kilometres of roads and railways," he said in an interview on Markíza TV.

"It was not Slovakia that started the war, after all. I don't know why we should keep whipping ourselves," he added.

Anna Belousovová, the deputy chairwoman of the SNS and the deputy speaker of parliament, said that in her opinion Slovakia "was not [ruled by] a fascist regime" during the Second World War, and that the wartime state should be "evaluated in the context of wartime events".

On the other hand, Daniel Lipšic, an MP for the opposition Christian Democratic Movement (KDH), said that Tiso's activities as president were among the country's historical "failures", and that "events incompatible with human dignity took place in the state led by Tiso".

Official Church bodies remained silent on Sokol's statements, a normal practice for the Church when asked to address sensitive issues, such as the fact that Tiso was a priest.

Jozef Kováčik, the spokesman of the Slovak Conference of Bishops (KBS), told The Slovak Spectator that "Archbishop Sokol expressed his personal opinion. The KBS is convinced that these questions fall within the competence of professional historians. The KBS also rejects a black and white interpretation of these facts."

Why does the Catholic Church continue to refuse to admit the horror of Tiso's rule? According to another Christian Democrat MP, Františk Mikloško, "we can only wonder why.

"The [wartime] state was led by the Catholic Church. It's not that the Church does not want to comment on the period, but when a priest errs, the Church usually does not talk about it. It's like a tradition," Mikloško said in a recent interview with the Sme daily.

It was not always so, however.

In a wartime address in Holíč in western Slovakia following the deportations, Tiso said of Slovakia's Jews that "things would have looked even worse if we hadn't cleansed ourselves of them and acted according to God's command: Slovaks, rid yourselves of those who injure you." (the quote is taken from the Wikipedia entry for Tiso).

Giuseppe Burzio, then the Papal nuncio in Bratislava, said then of the Slovak president that "it is now clear that the stance of Dr. Tiso as the head of state will cause great damage to the Church".

Meanwhile, Domenico Tardini, the Vatican's under secretary of state, wrote in an internal Vatican memo in March 1942 that: "I don't know if intervention can stop crazy people. And there are two crazy people - [Slovak Prime Minister Vojtech] Tuka, who is acting [to deport the Jews], and the priest Tiso, who is letting him."

Sokol's statement was criticized as not only insensitive to those who were persecuted by the regime, but also as factually wrong in ascribing greater affluence to the wartime years, especially after 1943.

Historian Stanislav Mičev said that during the initial phases of the war, Slovakia's decision to declare an independent fascist state protected the country from occupation, as in the neighbouring Czech lands, or from being overrun like Poland.

"Slovak land was untouched by war, most industry was controlled by German capital, and everything was geared towards serving the war machine," he said. "But it is strange that Archbishop Sokol did not draw a distinction between who was well off and who wasn't, because the conditions enjoyed by the members of the regime and their victims were completely different.

After 1943, as the fortunes of the Axis powers changed on the battlefield and a resistance movement spread in Slovakia, a food rationing system was introduced in Slovakia.