EVERY seventh lorry on European roads is carrying waste, European Union statistics say.
If the statistics included illegal waste transport, the number would be much higher.
This so-called eco-dumping - transporting garbage to countries where waste disposal is cheaper - has mostly been a problem for central European countries. 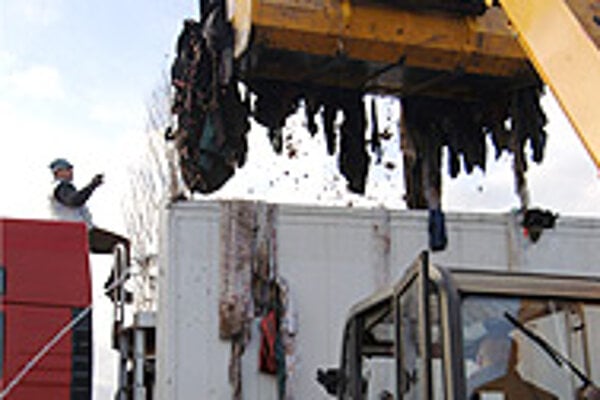 If the statistics included illegal waste transport, the number would be much higher.

This so-called eco-dumping - transporting garbage to countries where waste disposal is cheaper - has mostly been a problem for central European countries.

Slovakia is one of the top dumping grounds for waste traders, mainly from Germany and Austria. Last year, Slovak environment inspectors discovered 12 trucks carrying illegal waste across the border. They also found 1,300 tons of illegal municipal waste from Austria near the western Slovakia town of Partizánske.

The trash was transported to a "black," or illegal, landfill site and later burned. The environment ministries of both countries are still negotiating about whether the rest of the waste will be transported back to Austria.

The rest of the Visegrad Four countries have been afflicted as well - none more so than the Czech Republic. German waste traders have shipped more than 20,000 tons of municipal waste there in recent years, said Ladislav Hegyi, the head of the Friends of the Earth organisation.

According to Slovak Environmental Inspection, the illegal transports are usually backed by a chain of traders and smugglers. In the Partizánske case, there were at least eight companies involved in the waste transport. Tons of waste are often re-sold from company to company and transported again. Traders profit from tax claims on the waste when they leave a country's borders and from state funds they receive for disposing of the waste - which they never actually do. The waste often ends up being burned illegally in landfills or incinerators.

Environment organisations warn that the situation might get even worse if the European Union approves changes to its Waste Framework Directive. One of the amendments would classify municipal waste incinerators as a form of waste "recovery," instead of "disposal." If this amendment is passed into EU legislation, countries will be allowed to ship their waste to another country for incineration.

Currently, most EU members won't import waste that will be destroyed, but they will import waste for recovery - such as recycling or incineration, which generates energy.

Experts warn that redefining incinerators could open up a legal way to transport tons of mixed or hazardous municipal trash from western countries to central Europe, where disposal is much cheaper - and where the illegal waste business is already operating.

According to Hegyi, the waste transports from other member countries would mean not only a greater environmental burden on Slovakia, but also an increase in illegal landfill sites.

"The number of trucks coming to Slovakia would be so large that we wouldn't be able to control whether they transported the waste to incinerators or tipped it out after the third hill somewhere on a black landfill," he said.

According to European parliament spokesperson André Riche, member states will be able to stop waste from other countries from coming into their borders, if their own waste management plans don't allow it.

"The controls are to be made by authorities of each member state. They will be free to forbid importation of waste to their territory," Riche said.

The draft legislation passed first reading in the European Parliament on February 13. But the parliament didn't agree on the formula to be used to determine how much energy an incinerator must generate to qualify as waste recovery. That means the definition of incinerators is still left open.

The European Council and European Commission, which suggested redefining incinerators last December, will also have to agree on the redefinition and submit it to the parliament for a second reading, expected later this year or early 2008.

Slovak Environment minister Jaroslav Izák, who is scheduled to attend the European Council meeting on June 28, will vote against redefining incinerators, the ministry said.

The new directive will be the first amendment to the 1975 Waste Framework Directive since 1991. Once adopted, the directive is expected to form the basis of EU waste policy for the next 50 years.

Hegyi warned that after incinerators are redefined, the waste will essentially fall under free trade principles. In his view, states rejecting the trade of waste will therefore be rejecting free trade rules.

"Free trade was one of the pillars that the European Union was founded on. I am not aware of any regulation that would allow a member state to deviate from these principles," he said.

The European Parliament has not officially confirmed yet whether free trade principles will apply to waste after the new rules are passed.

However, a source close to the EP who wished to remain anonymous said fears that EU countries won't be able to regulate international waste shipments are unfounded.

"What would be the sense of obliging a state to manage its own waste as soundly as possible and making it a dumping ground of other countries at the same time?" the source said.

He also thinks it's unlikely that a member state would want to go to court over the right to pollute its neighbour.

The new legislation will install a five-step waste hierarchy that sets out the preferred ways for disposing of trash - prevention, reuse, recycling, energy recovery and landfill.

Waste prevention was a key goal of the amendment, because the amount of waste the EU produces is on the rise. Every EU resident produces 520 kg of municipal waste annually. According to OECD estimates, this will rise to 640 kg by 2020.

Slovaks produce about half of the average municipal waste made in the EU, the Environment Ministry reported. But it's growing by approximately 15 percent a year. The amount also varies according to the region.

"The amount of waste produced reflects the economic situation of the region and grows proportionally with the rise in standard of living," said a ministry spokesperson.

According to the last published Report of the Environmental State of Slovakia, from 2005, Bratislava residents produced almost 170 kg more municipal waste than the Slovak average two years ago.

"That's because there are municipal solid waste plants in both cities," Hegyi said.

"Those plants burn waste instead of recycling it, so they don't support waste recovery," he said.

"Recycling and composting take away the waste from incinerators, their source of income. They need to fill their waste capacity and do active lobbying to achieve that," he said.

According to Friends of the Earth, Slovakia recycles 15 to 17 percent of its waste. The European Union plans to create a mandatory recycling rate of 50 percent for all its member states by 2020. The EU average recycling rate is currently about 30 percent.

Experts say the 50 percent target is realistic. The Slovak Environment ministry said it has several methods to achieve this ambitious goal - such as financial help for villages from the Recycling Fund, a ban on destroying biodegradable waste, and requiring every village to separate five types of waste by 2010.

Hegyi thinks it simply takes money and motivation to increase recycling rates. He suggests that product manufacturers pay villages for the cost of separating waste.

"If the producers take responsibility for their products and pay the separation costs, the villages won't be forced to have the waste burned in incinerators, and will create comfortable and motivational conditions for recycling in turn," he said.

The "comfortable" conditions, according to Hegyi, mean giving people suitable bags and containers for separating their recyclable waste.

"There also needs to be a financial motivation for recycling," he said, "and those who separate their waste should pay lower waste fees."

One town is proving that Slovaks can win the fight over waste. Palárikovo, a town of 4,380 near Nové Zámky, joined a Zero Waste project in 2000 after it was forced to close its local landfill site.

Since the start of the project aimed at waste separation, the town has reduced the amount of trash it creates by more than 70 percent. Ninety-eight percent of Palárikovo residents separate their waste.