IMAGINE the cast of Hamlet multiplied by two, with each oversized Shakespearean role performed by two people - a live actor and a marionette. Now take this cast of fleshy and wooden personalities to a white storefront, home to a restored antique wooden carousel, in a warehouse in the trendy waterfront section of Brooklyn known as DUMBO. 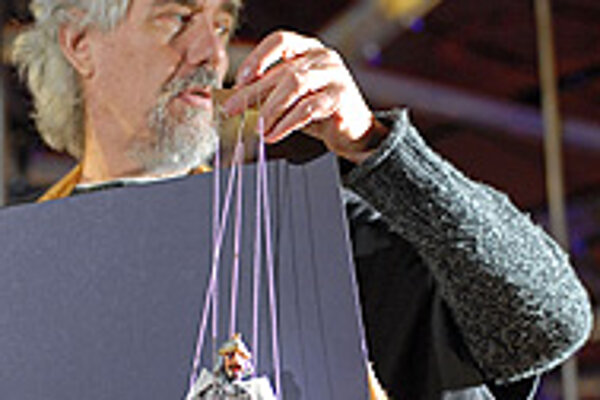 Font size:A-|A+  Comments disabled
IMAGINE the cast of Hamlet multiplied by two, with each oversized Shakespearean role performed by two people - a live actor and a marionette. Now take this cast of fleshy and wooden personalities to a white storefront, home to a restored antique wooden carousel, in a warehouse in the trendy waterfront section of Brooklyn known as DUMBO.

Vít Horejš, 57, is the unlikely puppeteer to see opportunity in such places as Jane's Carousel, where his company, the Czechoslovak-American Marionette Theatre, is performing its repertoire production of Hamlet through November 25. Previously, the group has taken its show on the road to the Shakespeare Festival at Prague Castle in 2004, among other venues.

Horejš said a performance he saw in 1972 by the marionette theatre troupe Drak from the Czech town of Hradec Králové changed the way he saw theatre.

"There are just so many different possibilities, the relationship between the puppet and puppeteer, puppet and puppet," said Horejš, who is both the production's director and stars as the ghost of Hamlet's father.

For the first time, Horejš saw a performance where live theater was intertwined with a marionette stage.

"It is always good to tell a story on many different levels," he said.

In 1978, Horejš left Prague. He moved to the United States the following year and for most of the 28 years since then, he has lived in New York. He currently resides in Manhattan's East Village.

In his previous life as an actor on the Prague stage under communism, Horejš worked when the city's avant garde theatrical scene was fermenting. Alongside samizdat (underground) literature, theater was a primary place where the absurdity of everyday life found its dramatic home. Czechoslovakia's first president after the collapse of communism in 1989, Václav Havel, was an absurdist playwright.

It was a revealing time to make such a discovery, in the wake of the Prague Spring in 1968, when hope for a conception of reform socialism was quelled. There was a growing recognition that the inhabitants of a socialist country have two lives - a private life and a public life that proceeds in accordance with the norms of an authoritarian state.

A combination of children's and adult theatre seemed like a logical leap for Horejš, he said.

His return to marionette theater, a favorite toy from his Czech childhood, began in the most unlikely of places, on Manhattan's Upper East Side in 1984. Historically home to a large number of immigrants from Czechoslovakia, Hungary, and Germany, but better known today as a postal code of the social and political elite, the Upper East Side still holds several churches, bookstores and butcher shops that cater to the immigrant communities that were once dominant.

"I felt like something should happen to them," he said before a recent performance.

It was not until 1990 that Horejš took the plunge and started the Czechoslovak-American Marionette Theatre. The company's first production of Faust was extremely traditional, with flip-over backdrops that hid the puppeteers behind them.

"The next performance we did was what I was really aiming for," Horejš said.

The puppeteers became actors and the stage grew to share their human dimensions.

While his current cast is drawn from New York-based talents, Horejš said in the past years the company has hosted Czech and Slovak talent on its stage from actors to stage designers. All of the puppets in the performance are handmade in Prague.

In Hamlet, 60 traditional wooden marionette puppets from Prague are combined with a modest cast of five actors. The Czechoslovak-American Marionette Theatre makes as much use of the range of the actors as the wooden figures, from shadow puppets to traditional Czech hand-carved puppets.

Lighting is key to the tricks that turn many of his scenes. But the location of the company's repertoire production of Hamlet is not fortuitous.

"For our previous version of Hamlet, we actually built a merry-go-round," Horejš said.

Its scale and grandeur bear no comparison to the current set, he said.

The owner of the present space, Jane Walentas, "seemed to think the wooden horses and the wooden puppets belong together," Horejš said.

The condensed, 70 minute version of Hamlet presented by the Czechoslovak-American Marionette Theatre is not based on an English revision, but on a 1920s Czech edition of Shakespeare for toy theatres.

"From there, I went back to Shakespeare," Horejš said, adding, "I didn't want to translate Shakespeare back into English."

The end product is a one-of-a-kind take on a classic of English literature. It is the sort of theatrical interpretation that is rare and difficult to find, often because of a combination of a lack of creativity, ingenuity and resources.

Throughout the year, Horejš performs solo classics of Czech folklore at New York area libraries, schools and theatres. He uses marionettes as an alternative personality and works as a puppeteer in a way that shows he is well versed with traditional and unfamiliar forms of the craft. His version of Hamlet is set up perfectly for its current stage on a carousel.

Some of the more unforgettable scenes are a double take of Hamlet and Ophelia kissing, where first the marionette representations of the two kiss before the actors on stage, Hamlet (Nat Cassidy) and Ophelia (Deborah Beshaw), embrace. It is a moment of tight action pulled away from the merry-go-round. The scene is well framed by a lighting scheme that allows you to see the couple's shadows from many angles.

Even though his productions are not intended for children, the crowd ranges in age from children and up. At afternoon performances, a quarter of the audience is usually under the age of 10, Horejš said.

If Shakespearean puppet theater interpreted by a Czech actor and director for adults in one of Brooklyn's trendiest and most expensive areas strikes you as absurd, perhaps it is. But if opera can be heard in English, why can't English literature be edited for 1920s Czechoslovak toy theatre?