As the privatisation of a 51% stake in the state-owned telecom monopoly Slovenské Telekomunikácie (ST) enters its last phase, two questions are on everyone's lips - how much will the state get from the sale? And who will the final buyer be: Deutsche Telecom, Royal Dutch KPN Telecom or Telekom Austria?
The fact that people are asking 'how much?' and not 'what's going on?', analysts say, is a major victory for the Slovak government in its first attempt to hold a significant international tender for a lucrative state jewel. The eventual buyer will have little time - perhaps two and a half years - to modernise ST and prepare the firm to meet market competition when ST's monopoly expires at the end of 2002. 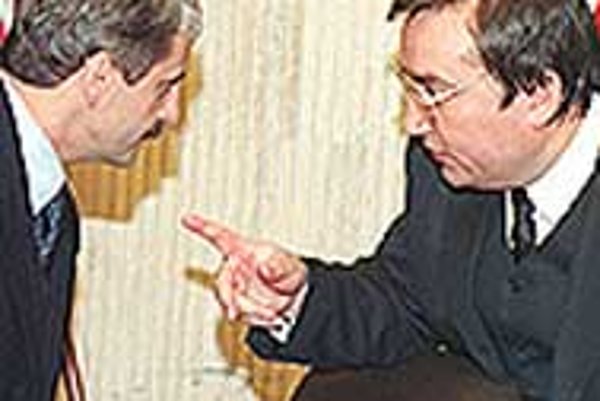 Font size:A-|A+  Comments disabled
As the privatisation of a 51% stake in the state-owned telecom monopoly Slovenské Telekomunikácie (ST) enters its last phase, two questions are on everyone's lips - how much will the state get from the sale? And who will the final buyer be: Deutsche Telecom, Royal Dutch KPN Telecom or Telekom Austria?

The fact that people are asking 'how much?' and not 'what's going on?', analysts say, is a major victory for the Slovak government in its first attempt to hold a significant international tender for a lucrative state jewel. The eventual buyer will have little time - perhaps two and a half years - to modernise ST and prepare the firm to meet market competition when ST's monopoly expires at the end of 2002. But pundits say that the transparency and clarity of the tender so far have sent an encouraging sign to potential buyers of Slovakia's other state treasures to be sold off - state banks VÚB, SLSP and IRB, gas utility SPP, energy utility SE and gas transit firm Transpetrol.

The Slovak Spectator interviewed Telecom and Transport Minister Jozef Macejko on March 21 to try and get a behind-the-scenes peek at the most important tender Slovakia has ever held.

The Slovak Spectator (TSS): What criteria will be used to pick a winner from the final three candidates for ST - Dutch Telecom, Deutsche Telecom and Telekom Austria?

Jozef Macejko (JM): Last Thursday [March 16] we closed the first round, in other words the evaluation of the worth of the offers. Deutsche Bank, our advisor on the privatisation, is now studying the offers and will come up with the conditions for the second round. The evaluation of these terms and conditions will be discussed by a government advisory body which was created last year - the Inter-Ministry Commission for the Choice of a Strategic Partner for Slovak Telecom - and these terms will be approved by the commission. One of the main conditions will be the price of the offer.

TSS: What specific advantages do you see in each of the three potential investors?

JM: The offers were made last Thursday, and our advisor has 10 days to evaluate them. So far we don't have any exact judgement on the offers, only preliminary estimates. All three meet the terms we had been hoping to see.

TSS: One of the potential investors, Telekom Austria, has said it would sink $4 billion into ST by the year 2004; Dutch Telecom, on the other hand, has a share in the Czech SPT Telecom, and analysts have said they would have an easier time renovating ST because the Czech company is so similar. Can you comment more specifically on what advantages you see in selling ST to any of these three bidders?

JM: It's hard to say before the terms have been set by the commission, but it will be a tough choice because all three firms are good, and therefore the main condition will be price. The other criteria you are talking about - future investments and so on - are only supplementary criteria which might affect the choice.

TSS: What has the role of the advisor been in this tender, which has been referred to by foreign investors as the sale by which all other tenders for Slovak state property will be judged for transparency and clarity?

JM: The advisor prepared all application documents that were submitted to the companies and also negotiated the details with them. Deutsche Bank also gave us advice on how to proceed. At the moment they are evaluating the offers, and will suggest how the choice in the second round should be made, and will also evaluate the closing bids. We hired this advisor because it is an international company which has experience in this market and with similar tenders. The advisor was also chosen through a tender process, and what they make from the sale of ST will depend on how much money Slovakia gets from the sale. So these conditions motivate the advisor to get the highest possible price.

TSS: How much weight will the advisor's word carry with the government in selecting the final winner of the tender?

TSS: How much money do you expect to get from the sale of a 51% stake in ST?

JM: I wouldn't like to specify the number at this stage of the tender, but as I said the price will be the decisive factor in the second round. I don't want to give numbers so as to avoid influencing the future investors in their offers, as well as to avoid breaking the rules of this tender. But I can tell you that according to the offers, the price is at a level we had expected.

TSS: As a newspaper, we first began reporting on the possible sale of ST back in 1995. How much do you think the value of ST has fallen due to the six year delay in calling this tender?

JM: It's impossible to fix on a number, because the final price is the result of a competition. All speculations are thus irrelevant, and my opinion is that ST should have been privatised several years ago. If it had been, the price would have been comparable to the amount the Czechs got for their telecom firm. But it's pointless to talk about that here.

TSS: Why such a long delay?

JM: The decision to privatise was taken in 1996, but until the end of 1998 nothing was done. It's tough to say why they [the 1994-98 government of Prime Minister Vladimír Mečiar] didn't do anything, because now they too are saying it should have been done sooner. So why didn't they act in 1996? They had all the chances that they had, but why they didn't take them I can't say.

In 1999 ST transformed into a joint stock company and began preparing for the privatisation which is now taking place, and which I believe will be finished in a short time - within the course of the next three or four months.

One factor that increased the delay was that we have been preparing a new Telecom Law. The version of the law that was prepared last year was not passed, so it had to be reworked; it was approved by the government [this March], and I believe it will be approved in its current form by parliament as well. The law is fully compatible with laws in force in EU countries.

TSS: What exact changes do you expect on the market before ST loses its monopoly on December 31, 2002?

JM: The Telecom Law approved by the government last week sets very specific conditions for the functioning of all entities on the telecom market. The law secures full liberalisation of all telecom services except for hard line and voice mail services. That means Internet services, mobile telephone services, data services... The law specifies the exact way in which licenses will be approved, sets the duties of all telecom providers for mutual interconnection of these different telecom nets, and strictly sets apart a regulatory organ, which will be the Slovak Telecom Office, from any ownership organ, because the ministry is also the owner of Slovak Telecom and will remain a minority owner after privatisation. The chairman of this Telecom Office will be elected in parliament, so he won't be dependent on the ministry or any other state organ.

This Office will regulate the technical and price aspects of the telecom market. It will be financially independent from the state budget, and will get its money from the selling of licenses and the giving of decisions.

TSS: What is the government going to do with the money it gets from the ST sale?

JM: Part of the money will be used to increase the basic capital to revitalise the company itself, and part should be given to the FNM [state privatisation agency]; the government will decide what the FNM does with this money. But it is expected the money will be primarily used to pay back old debts of the Slovak Republic, and a smaller part might be used for development programmes, for example flat construction and so on.

TSS: The boss of ST is Emil Hubinák, who was nominated by the SOP party; you, as Telecom Minister, are an SDK party man. How have relations between the two of you been? In light of the recent controversy surrounding the recall of Štefan Košovan from the SE energy utility - a man nominated by the SDĽ party - what do you think are the advantages and the drawbacks of political nominees sitting at the heads of state companies?

JM: My evaluation of co-operation between myself and Mr. Hubinák is very positive. Relations between us have been absolutely correct, and he has been putting all his energy behind having the privatisation take place as soon as possible.

As for the advatanges and disadvantages of political nominations, I think that every party which has an ambition to become a party of government has a certain number of specialists from all fields it is able to offer for important posts. So I wouldn't call them purely political candidates, but 'specialist-political' candidates. I absolutely don't think anyone would be nominated to the head of a state company purely on the basis of his political colours. Every party has to prove they have a sound specialist for the position, and Mr. Hubinák is in the first place for me a specialist in management, and only in second place a member of the Party of Civic Understanding (SOP).

TSS: As Telecom Minister, you replaced Gabriel Palacka, a man who resigned after a series of scandals concerning his ministry. What steps have you taken to ensure you don't suffer the same fate?

JM: Precisely this step - the privatisation of ST. It has been very closely watched, and there have been different views about how it should be run; to make it transparent we established this commission of 13 members. We also invited representatives of the civic organisation Transparency International, which monitors the process and the acitivities of the commission. This is a guarantee of transparency, and so far I don't think anyone has any grounds for complaint. Nevertheless, I think that when the privatisation is over, every unsuccessful firm will be unhappy. It's understandable, because only the winner is ever satisfied. Everyone is convinced that his offer was the best, that's why he made it.

TSS: Given the importance of this tender for the government's reputation, aren't you concerned about being criticised by sore losers?

JM: The government realises this [danger] full well, and that's why we've done everything to make sure this tender was transparent.