Forget fire and brimstone and fears of damnation, for the experience of Hell may not be all that bad. That is, if it's Slovakia's Hell beer of which you speak.
Hell beer has been pleasing the palates of beer drinkers in central Slovakia since 1473, and a recent partnership with exporter Weldon Walshe EEDC - to form Hell-UK Limited - now means that tipplers in England can get a taste of the underworld. Based on the solid Slovak-United Kingdom relationship, Hell's influence may soon reach far beyond the borders of Europe. 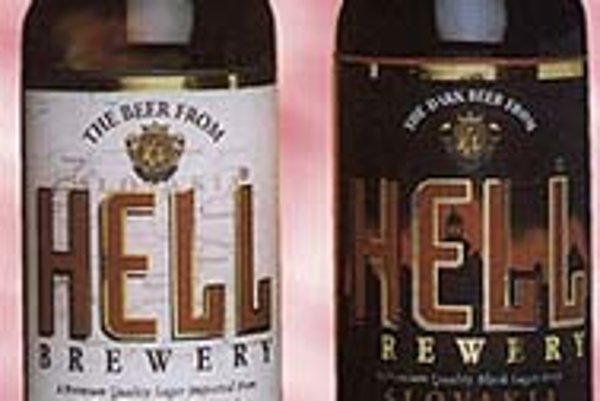 Font size:A-|A+  Comments disabled
Forget fire and brimstone and fears of damnation, for the experience of Hell may not be all that bad. That is, if it's Slovakia's Hell beer of which you speak.

Hell beer has been pleasing the palates of beer drinkers in central Slovakia since 1473, and a recent partnership with exporter Weldon Walshe EEDC - to form Hell-UK Limited - now means that tipplers in England can get a taste of the underworld. Based on the solid Slovak-United Kingdom relationship, Hell's influence may soon reach far beyond the borders of Europe.

Hell-UK Limited's Michael Walshe, an architect and beer lover, came to Slovakia nine years ago dealing in property development. Looking to supplement his income, he was attracted to a small brewery in central Slovakia that produced a beer with an intriguing name.

"I said 'yeah, Hell is a great name, and if the beer's any good, we may be able to do something here,'" Walshe said.

Hell beer is currently available at Tesco Stores throughout England and is distributed in limited quantities in Germany, Italy, Ukraine and Iceland. The company is now the seventh-largest brewery in Slovakia, and in the first nine months of 1999 sold more than 185,000 hectolitres of beer, 930 of which were exported. Although unavailable in Bratislava, crates of Hell should start arriving in the capital by early next year.

The beer claims to be as good as gold, which may not be that far from the truth. The natural spring water used in its creation is filtered through gold-bearing strata in the rich hills surrounding Banská Štiavnica, a gold-mining town in the Middle Ages. There are even minute traces of the precious metal in every bottle.

Notable acheivements of the dark brew include a 1997 award for "Best Beer in Show" by the BBC Radio North programme, and being chosen as one of three lagers to represent Tesco this past October at London's renowned International Festival of Fine Wine and Food. The beer also received rave reviews in the November 14, 1998 issue in The Times newspaper and was dubbed Beer of the Month in the September 1998 issue of FHM magazine.

"The beer from Hell brewery is an exceptionally well-balanced and hoppy beer; one of the best pilsners around," reported Oz Clarke on the BBC Good Food Show in 1997.

A match made in Hell

With its long track record in Slovakia, Hell Brewery didn't greet every new idea from the British exporter with open arms. Regardless, changes were an essential part of the deal for the beer to meet Britain's high import standards.

"In the UK, if we don't get everything right, then people regard everything as wrong," Walshe explained. "Any small discrepancy in quality control is regarded as a disaster, and it's very difficult to get that across to the management team of the brewery."

In Britain, beer is judged by more than its taste, Walshe explained. "Here in Slovakia, if the product tastes good, it doesn't matter if the label is slightly crooked or if the bottles are second-hand. But in the UK, presentation is just as important as the product, if not more important."

Still, the relationship has been an overall success for both parties, as the endeavor has proven profitable and the integrity of the product, even with the changes, has remained intact. The vast majority of adjustments revolved around ensuring consistent quality and updating equipment.

"We have have had an excellent relationship with Hell UK, and in the future we want to expand the relationship," said Ivan Zila, a company sales representative from Banská Štiavnica. "In February 2000, we will renew our contract with them."

Hell-UK Limited is also on the verge of winning assistance from Slovakia's Economy Ministry to defray exhibition and point-of-sale merchandising costs. The deal should be solidified early next year.

Other deals currently under negotiation include export to Canada, which could happen as soon as early 2000, and distribution to the United States by the end of next year. Future plans include exporting Hell to Ireland, Israel and Norway.

The tale of the brew harkens back to the Middle Ages and a rogue band of Christians called the Knights of Templar, who were persecuted by the French King Phillip the Fair. Hunted throughout Europe, a few knights found themselves in what is now Banská Štiavnica, where they began to brew what would become Hell Beer.

The origin of the Hell name remains unknown, with possibilities ranging from the traditional German greeting 'Heil' to the namesake of one of the former owners, Count Hellenbach.