Slovak services were brought to a standstill last week due to a series of anthrax alerts across the country.
Government offices were partially evacuated October 16 after Prime Minister Mikuláš Dzurinda received a suspicious package. An envelope addressed directly to Dzurinda containing a card which read "cheers" was opened by office staff. It was immediately delivered to the police and taken for tests for the deadly bug anthrax.
The scare came as the number of reports of suspicious mail rose across the country. At the Piešťany post office October 16 two envelopes were discovered to contain an unidentified white powder. Twenty-four people were later sent to a special isolation ward in Trnava hospital in connection with the incident. 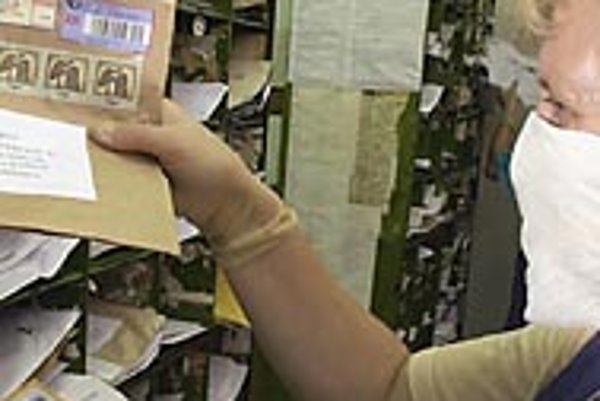 Font size:A-|A+0
Slovak services were brought to a standstill last week due to a series of anthrax alerts across the country.

Government offices were partially evacuated October 16 after Prime Minister Mikuláš Dzurinda received a suspicious package. An envelope addressed directly to Dzurinda containing a card which read "cheers" was opened by office staff. It was immediately delivered to the police and taken for tests for the deadly bug anthrax.

The scare came as the number of reports of suspicious mail rose across the country. At the Piešťany post office October 16 two envelopes were discovered to contain an unidentified white powder. Twenty-four people were later sent to a special isolation ward in Trnava hospital in connection with the incident.

Žilina post office was forced to close for three hours in a similar scare when a post office employee fell ill after handling a package sent from Canada. Tests are being carried out on the employee, but the results are not yet known.

The Slovak Post Office says it has begun inspecting all foreign mail. By October 17 more than 30 letters had been sent for testing at Slovak labs. Of those tested so far none have confirmed the disease.

It has also emerged that three suspected Irish terrorists arrested in Slovakia this summer claimed to have dealt directly with Osama bin Laden's European finance organiser.

The Spanish daily El Mundo reported that Fintan O'Farrell, Michael McDonald and Declan Rafferty, who were arrested under international warrant in Piešťany in July, had confirmed to American secret service agents they had dealings with the Al-Qaida network.

The men, who are suspected members of the Irish republican terrorist splinter group the Real IRA, claimed to have met an Algerian, Hamid Aich, who was Osama bin Laden's chief financial organiser in Europe.

Aich has allegedly built an operational base in Dublin over the last two years under the name of the Agency for Mercy and Sympathy. The charity organisation is said to be a finance centre for 22 different terrorist groups around the world.

O'Farrell, McDonald and Rafferty claimed they had been given a large sum of money from Aich to be deposited in banks in Santander, Bilbao and Vitori, likely to be used by the Spanish terrorist organisation ETA.

Slovak Interior Minister Ivan Šimko denied knowledge of the information but said: "Even if I had been informed of this, I would certainly not say anything anyway."

The three Irish men were arrested in Piešťany after a joint surveillance operation involving anti-terrorist forces from Slovakia, Britain and other central and east European states. They were extradited to Britain in September. The men had been snared by British secret agents posing as Iraqi arms dealers.

At the time they were thought to have been involved in plans to buy weapons for the Real IRA, probably from Croatia, and then ship them to the Irish Republic through central Europe.

The spa town of Piešťany has long been a European health retreat for wealthy Arabs. Under the former communist regime, middle-east oil magnates and sheikhs would come to the town for its special health centres and natural springs. An Arab influence has remained in the town, and hotels in Piešťany receive Arab TV stations, including TV Kuwait.

The arrest of the Irish trio was the second incident involving the detention of people in central Europe with suspected links to Irish terrorist groups. In August 2000, Croat police seized a shipment of arms including a rocket launcher allegedly destined for Dublin.

Weapons used by terrorist groups in Ireland, including the real IRA, have previously been traced to the Balkans region. Last September a warhead from an RPG18 rocket, believed to have been smuggled from the Balkans, was fired at the London headquarters of the top British Intelligence Service, MI6. British authorities said at the time that they believed the attack had been carried out by the Real IRA.

Following the arrests in Slovakia, the Irish police uncovered a number of arms dumps and underground training camps.

The Real IRA has also been held responsible for other atrocities, including the 1998 Omagh bombing which killed 29 people and unborn twins - the worst act of terrorism in 30 years of conflict in Northern Ireland.

Since the fall of communism across Europe at the end of 1989, western intelligence services and independent military experts have said that central Europe, especially the former Czechoslovakia as one of the largest weapons producers in the world when part of the Warsaw Pact, is a particular area of concern for illegal weapons trading and shipping.

The sudden and sometimes disorganised closure of many arms factories and the low wages paid to those controlling legal arms shipments, making them susceptible to bribery, makes it easier for illegal arms traders and runners to ship weapons to the West, the experts say.

Trade deals conducted in the mid 1990s have also been the subject of intense scrutiny in recent weeks. Slovak firms have denied having had contact with associates of Osama bin Laden. However, a report presented to cabinet October 10 by Economy Minister Ľubomír Harach showed that from 1995 to 1996 Slovakia sent Sk62 million ($1.3 million) worth of anti-tank missiles and other munitions to Afghanistan.

Harach refused to say which firms were involved or which group in Afghanistan had received the shipments.

Shipments of chemicals such as sodium sulphide, which can be used to make weapons, had also been made to Iraq, the minister revealed.

In late September several Slovak laws on the export and import of 'dual-use' goods were amended.

The changes were designed to restrict the issuance of licences for trading and transporting goods such as industrial chemicals, toxins and technologies used in nuclear power generation.

Some chemicals used extensively in agriculture, such as ammonium nitrate, can be used to make explosives.

The import and export of ammonium nitrate from Russia and the Ukraine, for example, is forbidden under the new Slovak law.