Two Slovak football teams returned from the Azerbajzani capital on October 10 with victories under their belts but very different emotions in their hearts. The Slovak national football side notched a slim 1-0 victory but was still eliminated from the upcoming Euro 2000 Championship. The Under-21 football squad, meanwhile, defeated Azerbajzan 3-0 to win its qualifying group for the European championships and keep alive its goal of qualifying for the 2000 Olympics in Sydney. 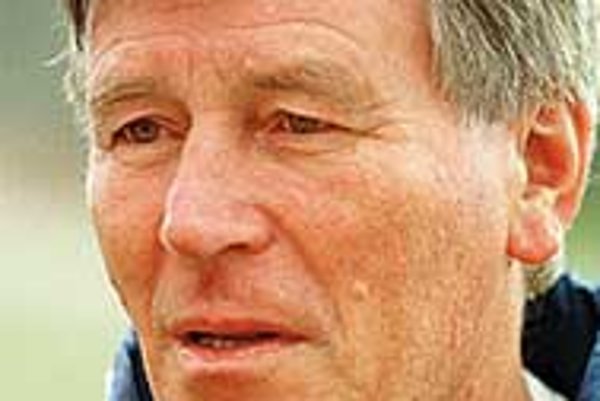 Font size:A-|A+  Comments disabled
Two Slovak football teams returned from the Azerbajzani capital on October 10 with victories under their belts but very different emotions in their hearts. The Slovak national football side notched a slim 1-0 victory but was still eliminated from the upcoming Euro 2000 Championship. The Under-21 football squad, meanwhile, defeated Azerbajzan 3-0 to win its qualifying group for the European championships and keep alive its goal of qualifying for the 2000 Olympics in Sydney.

"We had to win, because finishing second in the seventh [qualifying] group after a loss might not have been enough to advance," said Dušan Radolský, Slovakia's Under-21 coach, after the match. "That's why this match was extremely important. Maybe at the beginning my players were overmotivated a little, but our performance improved step by step. I'm very happy, but this is only the first step towards qualification [for the Olympics]."

National team coach Jozef Adamec, a former top-flight footballer in his own right, said his team had deserved to win because it had controlled play in the game. The narrow victory returned a measure of both credit and confidence to the Slovaks, who had been shelled 5-1 at home by Rumania during their last outing. Rumania won the group over runner-up Rumania.

Slovakia's chances of moving on to the Euro 2000 Championship were eliminated after the Rumania debacle, and few team members were looking forward to the trip to Baku. The Azeris were playing for prestige alone, and had a reputation for fierce football on their home pitch. The flight into the Azeri capital seemed an omen or worse to come - seven nauseous Slovak team members and officials fought for space in the cramped washroom as turbulence over the Caucasus mountains threw the aircraft around.

Coach Adamec, whose fear of flying is well-known (he once refused to fly with the national team to a tournament in Central America) spent the five hour flight in prayer with his eyes fixed on the cabin ceiling. His players didn't know whether to smile or feel sorry for him.

The U-21 squad was given only 24 hours to acclimatise before a three-hour trip to the host pitch, which proved to be in terrible condition beside the oily Caspian Sea. Around 2,000 Azeri spectators came to watch them play at Sumgayit Stadium, and must have been encouraged by the poor display the Slovaks staged in the first half.

Thanks only to the work of Peter Babnič, who was fouled in the box and converted a penalty in the 34th minute, the Slovak team went to the locker room ahead 1:0. "Our coach didn't name the penalty shooter before the match," said Peter Babnič after the game, "but I felt very angry and very confident in shooting. It's not standard that the fouled player takes the penalty, but I felt really fine and I did it."

Radolský greeted his players with a string of screamed cuss-words in the locker room during half time, after which the players emerged showing the resolution they had lacked in the first half. Karol Kisel, the smallest player on the pitch, sent a long pass to fleet rightwinger Marek Mintál, who returned the ball precisely to Kisel for a power header into the back of the net in the 71st minute. Striker Ľubomír Meszároš launched a 20 metre frozen rope into the Azeri goal in the 90th minute to pad the victory.

Radolský ended the sucessful day in the hotel swimming pool fully dressed, and the U-21 officials, trainers and accompanying journalists celebrated till dawn. The players, however, closeted themslves in a hotel room with only a few token bottles of champagne for comfort. Radolský said he appreciated their temperance. "We have to wait until later in October for the play off draw in Aachen [only eight teams will advance out of the best sixteen teams from the qualification groups], and we may have to go through another strong opponent in aggregate in two matches. Only if we are successful then can we be proud of ourselves," the coach said.

If Slovakia becomes one of the eight European finalists, it will take part in a final Euro 2000 tournament for olympic teams under 21 years of age. From that tournament, the four best teams will attend the Olympic Games in Sydney 2000.

The future of the Slovak national team is less rosy. Although its third place finish in group seven was the best result ever for Slovakia in European championship qualifiers, neither the players nor the public were satisfied with the team's performance.

Coach Adamec, after employing the wrong tactics in the brutal loss to Romania, came under intense public pressure to nominate fresh players to the national side. In Baku, as a result of the tinkering, Slovakia presented a very lax performance with eight defenders on the field at one time. Striker Martin Fabuš was left alone to ford the Azeri defence, and found it almost imposible to create goal chances.

Adamec is now expected to be recalled, and the national team to be revamped with young players and fresh attitudes.