Early in the morning on February 20, an international French-Russian-Slovak space mission took off from Bajkonur, Kazakhstan to reach the Russian space station MIR. The Sojuz TM - 29 spaceship docked at MIR two days later, and Slovakia's first astronaut disembarked to begin a mission on which he will carry out research projects co-ordinated and prepared by the Slovak Academy of Science.
Thirty-four year-old Ivan Bella, a native of the village of Dolná Lehota in central Slovakia, began an eight-day mission in space after having spent one year in preparation at a space training center near Moscow. 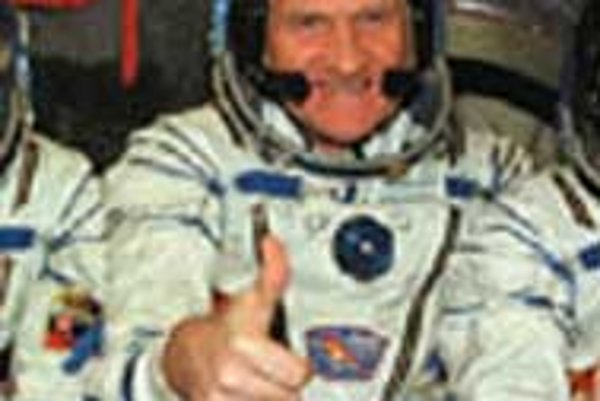 Font size:A-|A+  Comments disabled
Early in the morning on February 20, an international French-Russian-Slovak space mission took off from Bajkonur, Kazakhstan to reach the Russian space station MIR. The Sojuz TM - 29 spaceship docked at MIR two days later, and Slovakia's first astronaut disembarked to begin a mission on which he will carry out research projects co-ordinated and prepared by the Slovak Academy of Science.

Thirty-four year-old Ivan Bella, a native of the village of Dolná Lehota in central Slovakia, began an eight-day mission in space after having spent one year in preparation at a space training center near Moscow.

"I take my mission as an honour and responsibility," said Bella before the launch, adding that his feeling sprang from the knowledge that thousands of people in Russia, France and Slovakia had worked to prepare the mission.

The decision to put a Slovak in space was conceived by the government of former Prime Minister Vladimír Mečiar as a way to write off some of the millions of dollars in debt owed the nation by the Russian government. Slovakia's new government, elected last September, continued the project, agreeing that the mission would advance Slovak scientific research through six unique experiments Bella would execute.

According to the Slovak daily paper Pravda, the extent of the Russian debt to Slovakia after the break-up of the Soviet Union in 1991 "was originally $1.86 billion... and still represents over one billion dollars." Though unsure of the precise figure, Finance Ministry spokesman Jozef Mach said that the original debt had been about $1.7 billion, but "could have easily gone up [to $1.86 billion] because of interest." Twenty million dollars was subtracted from the debt to fund the Slovak space mission.

"The funds spent on the Slovak astronaut was probably the best-spent money that was written off from the Russian debt," said Defence Minister Pavol Kanis.

Besides the money spent on the Slovak astronaut, Slovakia has been receiving different forms of the debt compensation since 1993. Renáta Kubáleková, director of the Financial Operation Section of the Finance Ministry, said that the debt money - owed to Slovakia after the nation had spent years sending manufactured goods to the Soviet Union without payment - had been repaid mostly with weapons, but also with goods for non-military purposes, like cars, nuclear fuel, medical equipment and laser technology.

Despite his claim that the MIR mission was the nation's 'best invested debt money', Kanis admitted that the flight could have been much cheaper if spending had been better controlled.

"Next time, we will proceed [with such an operation] differently," Kanis said.

In the name of science

Although the flight was often portrayed in the Slovak media as a politically-motivated effort, the Slovak Academy of Sciences (SAV) claimed purely scientific motives for the venture. Researchers at SAV say the mission is an important intellectual step forward for Slovakia.

"It's just a culmination of the 30-year tradition of SAV space research," said Štefan Luby, president of SAV.

The six experiments to be performed by Bella on MIR were selected in a competition to which 32 projects were submitted. The experiment results, Luby said, would be applied to weather forecasting from space and physical training for all types of professions.

An experiment called 'Endotest' will be one of the most important, he said. Its primarily goal is to test how human hormonal function is affected by stress in space, said Juraj Koška, a scientific researcher with the Institute of Experimental Endocrinology at SAV.

In space, Bella will undergo several two-hour tests during which he will be subjected to a variety of stresses. For example, Bella's blood will be taken before, during, and after he is asked to solve difficult math problems under pressure. He will do work to bring about physical stress, and will also be injected with insulin, causing his sensitivity to stress to rise. The blood samples, Koška said, will then be frozen and tested after Bella returns to earth.

"The kind of research we are doing in space has never been done before," said Koška. Though scientists have carried out experiments involving hormones before, he said, the previous tests were less accurate because they examined hormones in "tears and urine," not in the bloodstream as the MIR experiment projects.

Koška said it was hoped that the hormone experiment would shed light on how weightlessness affects the hormonal balance of a stressed person. "The results of the tests will help doctors to set proper conditions for astronauts while they prepare for space, as well as help the whole field of cosmic medicine," Koška said.

Another project will examine how human sensory systems and sense of orientation function in zero-gravity conditions. A third will research the development of post-embryonic Japanese quails in space as a possible future food source for people who live on the space station.

The actual science projects were funded directly from the Slovak treasury, not from the Russian debt. Total costs of the six scientific research projects reached 15.59 million Sk ($ 389,780). The most expensive of all was the 'Endotest' project, which cost 3.54 million Sk ($88,500).