TV Markíza sold from under feet of boss

"Rusko is a man to lead a cavalry charge against tanks."
Source close to CMEIn a coup-like raid on August 18, more than twenty armed men from a private security service invaded the Bratislava premises of Slovakia's most popular private TV station, TV Markíza. Four of them burst into the office of Pavol Rusko, the station's General Director and co-owner. "They disconnected my phone, pushed me into a room and announced it," said Rusko.
'It' turned out to be an injunction issued by Bratislava Regional Court the previous day, forbidding Rusko to execute any of his rights as legal representative of Markíza. The bearer of the bad tidings was Marián Kočner, co-owner of a company named Gamatex that had hired the security guards and had quietly bought out Rusko's share of the station. The court order that Kočner held effectively stripped Rusko of his ownership rights. 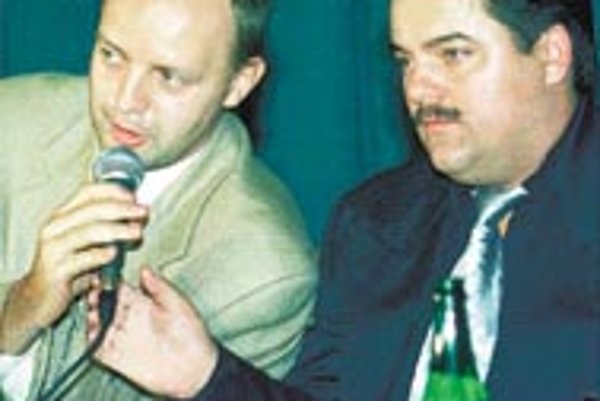 In a coup-like raid on August 18, more than twenty armed men from a private security service invaded the Bratislava premises of Slovakia's most popular private TV station, TV Markíza. Four of them burst into the office of Pavol Rusko, the station's General Director and co-owner. "They disconnected my phone, pushed me into a room and announced it," said Rusko.

'It' turned out to be an injunction issued by Bratislava Regional Court the previous day, forbidding Rusko to execute any of his rights as legal representative of Markíza. The bearer of the bad tidings was Marián Kočner, co-owner of a company named Gamatex that had hired the security guards and had quietly bought out Rusko's share of the station. The court order that Kočner held effectively stripped Rusko of his ownership rights.

In the tumultuous days that followed, the Slovak media was rife with speculation that the TV coup had been politically motivated, as Markíza has been documented by media control bodies as favoring the opposition in its news coverage. Rusko himself said darkly that "38 days before the elections, this must have a political background."

But as the story unfolded, it became clear that the abrupt takeover had its roots in long-term conflict between two of Markíza's owners, and had more to do with unpaid debts than pre-election politics.

The court decision said that three days before, on August 14, Markíza Slovakia had been sold in an auction by the County Executory Office in Bratislava. The only participant in the tender was Gamatex, which bought all of Markíza Slovakia for a mere 232,000 Slovak crowns ($7,000). These changes were promptly introduced into the Companies Register, making Gamatex the legal owner of 100% of Markíza Slovakia and, consequently, of 51% of STS, the company that owns TV Markíza. Rusko said he had not been aware of the auction and its results.

STS is the company that has been broadcasting TV Markíza since August 31, 1996. Markíza Slovakia is one of its shareholders, with 51%. The other owner is Central European Media Enterprises (CME), with the remaining 49% of stock. Markíza Slovakia itself was owned by two people - Rusko and Sylvia Volzová - who each had 50% of the company until the stunning announcement.

Whatever the new ownership structure, by law Rusko was on August 18 still a statutory representative of both STS and Markíza Slovakia even after the sale, as the Slovak Commercial Code stipulates that only "a General Meeting can appoint and recall statutory representatives." Thus, the injunction sought by Gamatex was needed to stop Rusko from acting on behalf of the two companies until he could be recalled.

Kočner had the TV Markíza building seized on the following day, reasoning, according to several STS employees who requested anonymity, that since he was now the majority owner of STS, he could do as he pleased.

CME, the minority partner in STS, termed Kočner's actions "a use of violence," and expressed "full support for Pavol Rusko." Rusko, facing what he called "a situation that could lead to shooting," left for Prague immediately after the coup to consult with CME management and owners. Meanwhile, his former business partner, Sylvia Volzová, stayed on at TV Markíza.

At 3 p.m.,Volzová attended a press conference, where she quoted the injunction and said that she and Rusko would appeal it. She also said that Rusko had requested she manage the station in his absence.

But Rusko would have none of this. "[The auction] was done without my knowledge, using a seizure order based on a debt acknowledged by Ms. Volzová, who was absolutely without authority to do so," he said.

Rusko later released documents to the Slovak media, including a copy of a notarized statement signed by Volzová on June 4 in which she confirmed that Markíza Slovakia was in debt to Gamatex and agreed to the eventual execution sale of Markiza "even without any previous lawsuit." Volzová herself told Rádio Twist that "I have nothing to do with Gamatex."

Next day, August 19, Rusko and CME Prague's Martin Radvan came to Bratislava. But instead of staging a showdown with Kočner's men, they began to negotiate. At 3:30 p.m., they emerged together with Kočner to announce that they had agreed to disagree. In a new atmosphere of indulgence and compromise, Kočner explained why he had ordered armed men to seize the TV station. "We merely came to look at our property and make sure nothing...got lost," he said.

While Kočner continued to consider himself the legal owner of Markíza Slovakia, Rusko announced he would appeal the court decision. Ernest Valko, the former Chief Justice of the Czechoslovak Supreme Court, said that the seizure might not be valid. "It is questionable whether seizure of one's share in a company can be valid. The Slovak Executory Act recognizes only seizures of company assets, not one's share in a company."

However, both Rusko and Kočner said they would try to negotiate an out-of-court settlement. Meanwhile, they explained, until the situation is resolved, Rusko would remaine the station's general director and Gamatex would withdraw from the building and refrain from further interference with TV Markíza's broadcasting.

According to an inside source close to the whole situation, "Rusko knew he had a problem from the very beginning. He had only one opportunity - to borrow from CME to pay off his obligations. He has always refused a CME loan, since that would take away his independence from [the Americans]." But as the source continued, "now he doesn't have a choice. If Gamatex does not demand too high a price, Rusko is going to pay with a CME loan. However, that will tame him." The source explained that Rusko's own stubbornness had let the situation get out of hand. "Rusko is a man to lead a cavalry charge against tanks," he said.

According to copies of contracts and lawsuits seen by The Slovak Spectator, the issue at stake in the controversy is a contract signed by Rusko and entrepreneur Siloš Pohanka on August 21, 1994 on behalf of their respective companies, Markíza Slovakia and ESPE studio. The contract stipulated that in exchange for ESPE's assistance to Markíza Slovakia in obtaining a broadcast licence, ESPE would get 40% of the future broadcasting company. The penalty for breaking the contract was set at DM 2.5 million ($1.5 million), but even payment of the penalty would not release the guilty party from contractual obligations. However, the contract was supposed to become void if Markíza did not get the license in the first round of 1994 license tenders, which is exactly what happened.

Rusko denies the validity of the Pohanka case. "The contract is not valid, and there is no obligation to pay arising from it," he said. Nevertheless, Pohanka sued him for the penalty and then sold the whole claim to Gamatex in November 1997. A week later, Volzová confirmed in writing that Markíza Slovakia accepted the transfer of the claim from ESPE studio to Gamatex, and that it accepted the claim as valid.