Pavol Rusko: "I have enormous power"

PAVOL Rusko is no stranger to either media or politics, but the way he combines the two has long frightened advocates of democratic plurality.
Rusko, 38, now heads the Ano non-parliamentary party, which he set up last year to advance "centre-right views, much like the Republicans in the US or the Conservatives in Britain". The party, he admits, has moved to the right from the "liberal-socialist" ideals it promoted in its first month, although "no one can accuse either Ano or I of not having social feeling."
Ano also runs third in some political opinion polls with around 10 per cent support, and is seen as having a strong chance of forming part of Slovakia's next government after September 20-21 elections. 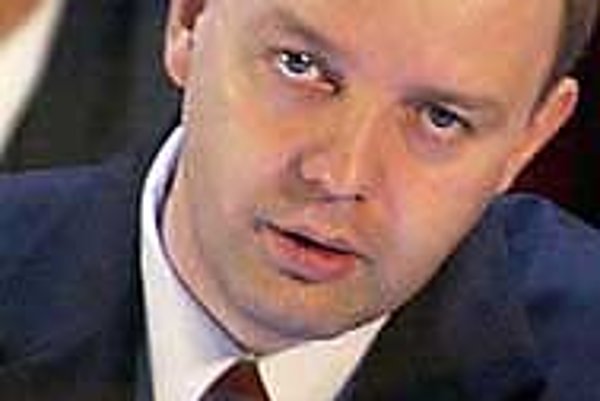 Font size:A-|A+0
PAVOL Rusko is no stranger to either media or politics, but the way he combines the two has long frightened advocates of democratic plurality.

Rusko, 38, now heads the Ano non-parliamentary party, which he set up last year to advance "centre-right views, much like the Republicans in the US or the Conservatives in Britain". The party, he admits, has moved to the right from the "liberal-socialist" ideals it promoted in its first month, although "no one can accuse either Ano or I of not having social feeling."

Ano also runs third in some political opinion polls with around 10 per cent support, and is seen as having a strong chance of forming part of Slovakia's next government after September 20-21 elections.

In the same way, the television station Rusko founded in 1995 and still part-owns, Slovakia's runaway viewership leader Markíza, is a different order of journalism from that he practiced as a sports reporter for the state STV station from 1985 to 1992.

But politics and media - then communism and STV, now Ano and Markíza - are once again entwined for Rusko, who has repeatedly been accused by state and NGO watchdogs of using his media power to promote his party.

"Monitoring showed mainly with TV Markíza the tendency to use this television station for the promotion of one political party," said Mária Hradiská, vice-chair of the state Council for Broadcasting and Retransmission (RVR), this June before taking action against Markíza in 17 cases of unbalanced and biased reporting at the station. The state-run STV, by comparison, did not receive any council censure.

Rusko has long defended himself against such criticism by attacking the monitoring methods used and the alleged bias of Council members. But in an interview with The Slovak Spectator July 23, he confessed sympathy for the views of a US media owner who defended the use his media influence for political gain.

The Slovak Spectator (TSS): You have often been accused of using your television station to promote your political party.

Pavol Rusko (PR): Monitoring by the Council for Broadcasting and Retransmission in March showed that Ano was given 6.3 per cent of news air time, so we were in fifth or sixth place [Ano actually took fourth place among time given to political parties on Markíza - ed. note], which is absolutely in order. June was the same. So they cooked up this idea of fining us for one piece which they thought wasn't balanced [Sk100,000 in July for a feature on the one-year anniversary of the founding of Ano - ed. note].

Not even the Communist Party organs behaved in such a way. Imagine nine people on some council fining a television station because a news piece discussed only one party. What's up with that? Is that freedom of speech? Who dares to interfere with freedom of expression to such an extent that he tells a journalist he must include this or another opinion? What is that? Have we returned to before 1989 or what? Where are these gentlemen getting such divine powers to decide how news pieces should look?

TSS: But don't you yourself tell your journalists and anchor people over the phone what you want broadcast and what you don't?

PR: I don't know what is being broadcast. What do you think? I don't have the right to do such things. I don't worry about it at all. I have told them that if anyone calls them and says he has agreed with me that this or that should not be broadcast they should call me, because it is sure to be nonsense.

I know that not everything we broadcast is completely OK, but I'm not worried, and you know why? Because I know that 90 per cent of the people there [working at Markíza] see things the same way I do. People who don't have to be watched. We picked them two or three years ago on the basis of a similarity in our opinions. That's just logical. When we pick people for Markíza we look for people who feel and see things the way we do. Do you really think such a high-quality television could have people at its core who erect barriers to communication? Or that they would be allowed to?

TSS: Monitoring groups such as Memo 98 have criticised not just the airtime that Ano gets on Markíza, but also the universally positive tone of coverage of the party.

PR: Yes, yes, but our journalists use this space in accordance with their feelings. Who should tell them how to feel? I don't call the newsroom and give them any instructions. It's their problem how they do the news. Theirs. We have journalistic freedom here, and I would be very unhappy if anyone stuck their nose in and said exactly how much time everyone had to get.

Look at America, where Mr. [Mike] Bloomberg [mayor of New York City and head of Bloomberg News] said "it is my supreme constitutional right to use the results of my work. This television station is my property, and I will use the results of my work." I agree with him, although I wouldn't want to go quite so far in this country, just because it's a very sensitive issue. I regard Markíza and the connection with Ano very sensitively, I take great care, and we practice extensive self-censorship.

TSS: It's not just Markíza that is connected to Ano, of course, but other media such as the Národná Obroda national newspaper. When I checked the Slovak press archives this morning I found 378 mentions of Ano in Národná Obroda compared to 289 in the Sme paper, which came second. Národná Obroda also carries far more mention of lesser-known Ano people than do other papers. Is this evidence of a sensitive approach to using your media properties for your political benefit?

PR: Well, we have to present ourselves in every media as often and as much as possible. That's just natural. As far as promotion goes, just look at the Pravda daily, where you'll see [non-parliamentary Smer party leader Robert] Fico a hundred times and Rusko not once. Given that [financier] Juraj Široký is a shareholder of sorts in Smer as well as in [Pravda publishing house] Perex, they use the paper to promote themselves. That's their right.

Those who decide over such [media] matters do so in view of their relations to someone else. [State television channel] STV is closer to the Democratic Party, which is why we have Dzurinda from morning to evening.

TSS: A recent voter survey put Ano in second place in the political popularity charts, meaning it's not wholly out of the question that you might hold a government position after September elections. Do you feel that your use of your media clout for political promotion is a statesmanlike gesture? Does it build public trust that you will administer state property in the state's interest?

PR: Look, I am not at all thinking about whether or not I'll be prime minister, but on the other hand if the elections turn out in such a way that Ano will be in the running for the PM's chair, I don't hide the fact that it would be an honour, I won't start saying 'now we have to find the right person.'

I will do with Markíza and my business activities exactly what the law requires, meaning I will not be the managing director of these firms. But if the people decide and I become prime minister or take any other political function, I think it's fair that they know about these things. That I don't pretend anything. That I don't hold press conferences claiming to be some poor guy who owns a two-room flat and that I have no influence in the television station. I will tell the truth, and they will either accept that truth and know these things, or they won't. I think that's much more fair than pretending to be something I'm not. To admit that I will always be connected to Markíza.

You just have to check up on me. Yes, I have enormous power in my hands, but you simply have to make sure I don't abuse it. I want to be under public control. I didn't get into politics to steal the first million I find lying on the table. Thanks, but I've already got [money], I don't want any more.

TSS: Are the quality of Slovakia's politicians a reflection of the state of Slovak society?

PR: No. It's the result of people moving into many different new areas [of public life]. We don't have a strong bench [of reserve players] to draw on, but I think this country has got what it takes to produce a good team.