Bagpipes not only a Scottish thing

"FEW musical instruments have had such a long tradition, are spread throughout so many countries, and have had such an important societal function as bagpipes," states the website of the Guild of Slovak Bagpipers (CSG).
The guild, which monitors up to 40 active bagpipers around Slovakia, is one of the organisers of the 4th International Meeting of Bagpipers - the Gajdovačka 2003 - that will run from September 19 to 21 in the country's northwestern region of Orava. 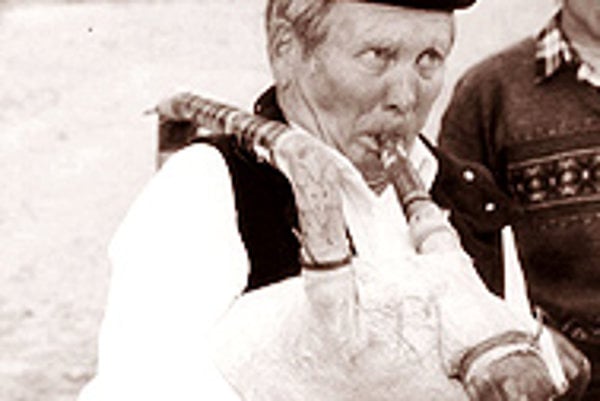 Font size:A-|A+
"FEW musical instruments have had such a long tradition, are spread throughout so many countries, and have had such an important societal function as bagpipes," states the website of the Guild of Slovak Bagpipers (CSG).

The guild, which monitors up to 40 active bagpipers around Slovakia, is one of the organisers of the 4th International Meeting of Bagpipers - the Gajdovačka 2003 - that will run from September 19 to 21 in the country's northwestern region of Orava.

The event will bring together around 100 pipers, singers, and dancers mainly from Slovakia, but also from the Netherlands, Austria, Hungary, the Czech Republic, and Poland. Part of the festival will also take place in the nearby Polish town of Milowka, as Poland has a similar Goral (traditional shepherd) culture to Slovakia, the CSG's secretary, Milan Rusko, explained.

It was the bagpipers themselves who initiated the festival during their meeting in Veľká Lehota, which is one of the villages located in the Mecca of Slovak bagpipers - the region around the mountain range of Pohronský Inovec.

"From an historical viewpoint, bagpipes have played a significant role in Slovak folk culture during the last few centuries," Rusko said. "Practically all around Slovakia, people used to dance to bagpipes. The advantage of this kind of dance music was that there was one musician, who could take the place of an entire band.

"On the verge of the 19th and 20th centuries, the situation began to change. With the arrival of the harmonica, and the tuba, bagpipes were being pushed out," Rusko explained.

"In 1980s, I was lucky enough to meet bagpipers who still played at weddings [in the Orava region]. They recently died, but their students have picked up their styles, they keep up the traditions," said Rusko, a bagpiper himself, who teaches the instrument to children in Devínska Nová Ves, near Bratislava.

There have been several types of bagpipes produced in the country, he explained, each with unique features. Then he went on to describe in detail the types of bagpipes that can be found in the area of Pohronský Inovec, in central Slovakia.

"These bagpipes are tuned very high and thus have a very pleasant sound. People are more used to the oboe-type instruments, like the Scottish Highland bagpipes, which are aggressive, strong, and noisy. One will discover a new sound while listening to these types of clarinet-based bagpipes," Rusko said.

When asked why Slovakia is not recognised for its bagpipes the way Scotland is, Rusko said that "The problem is that we don't know to 'sell' our things." He added, "Just look at how many people outside the borders know Slovakia for its typical fujara instrument."

The three-day festival, Gajdovačka 2003, opens at 15:00 on Friday, September 19, with a bagpipe concert at the centre of Dolný Kubín. A few hours later, the musicians will travel to the village of Oravská Polhora to play around a bonfire. Saturday, in Oravská Polhora, will begin with a Small School of Bagpipes, which will play at 10:30, and continue into the afternoon with the 2nd annual competition for young bagpipers. Additional concerts will begin at 17:00, in the village of Mútne, and at 18:00 in Milowka, Poland.

Gajdovačka 2003 will culminate on Sunday, with a commemoration of the Orava bagpipers, a discussion on current aspects of traditional folk culture, and a CD recording of the participant bagpipers. The festival will close with a performance by all participants, starting at 14:00 in Oravská Polhora, along with a concert by the international band Keltieg, playing Irish-inspired folk music, in the Námestovo amphitheatre at 15:00.

For more information about the festival, contact the Orava Centre of Culture (OOS) at 043/5864-928, or email at osvetadk@nextra.sk.