THE GREAT inventor Leonardo da Vinci sketched the diagram of the world's first parachute in the 15th century. However, he never got the chance to check the idea out. Years passed, technology developed, and his idea fell into oblivion. 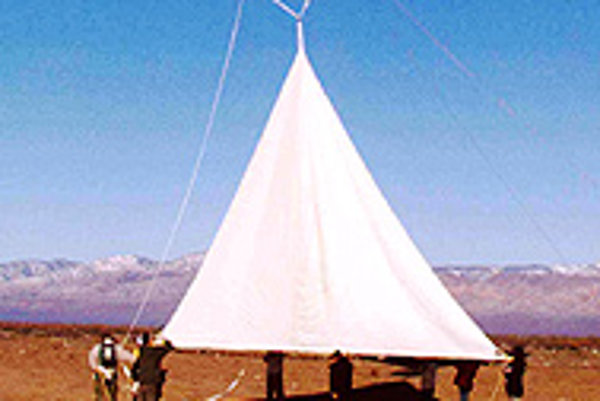 Font size:A-|A+
THE GREAT inventor Leonardo da Vinci sketched the diagram of the world's first parachute in the 15th century. However, he never got the chance to check the idea out. Years passed, technology developed, and his idea fell into oblivion.

A half a millennium later come skydivers Adrian Nicholas and Katarina Olliekainen, who decide to bring the idea back to life. In a parachute constructed according to da Vinci's design, they prepare for a brave jump from 3,500 metres.

One can see the results of this test of a centuries-old design in the film Adrenaline Rush: The Science of Risk by Herb Lash, which will be one of the five large-format novelties shown at the 5th International Film Festival (IFF) Bratislava. This is the first time in its history that the festival has stretched its screenings across the large-format Orange IMAX Bratislava Cinema.

Altogether, this year's IFF Bratislava will show more than 200 films. For nine days, from November 28 to December 6, five screens of the Palace Cinemas multiplex in Bratislava's Aupark shopping centre will show film after film almost non-stop.

"The festival is the most [cinematic] massive event taking place in Slovakia," said the festival's president, Milan Kňažko. "And the fact that it is taking place for the fifth year shows that we take it seriously."

Last year, 50,000 viewers attended the festival. One reason is that the event is open to any viewer, with a large offer of films categorised into 15 sections.

Eighteen films from around the world will compete in the festival's main section. Entries include the winner of the best debut at the Berlin festival, Blind Shaft by Chinese director Li Yang, for example, or The Last Train by Aleksej German Jr, which received a special mention at the Venice festival. No Slovak movie made it to the category.

"There was no Slovak film of such quality created this year that could compete among the 18 selected titles," said Peter Nágel, the festival's programme director. The selection of the newest films from inside the country, though, will be presented at the festival, as is the tradition.

The European Film section will offer the best that has been recently made on this continent, while Off the Mainstream will present works created in a non-traditional way, using innovations that open new paths in film development. Among them, visitors can see the two latest pictures by one of the most controversial women in contemporary arts, director Catherine Breillat - Sex is Comedy, and Fat Girl.

The Best of the Best Shorts section, prepared by Vicky Novosadová, will screen a selection of films that have been shown during the Festival of Short Films, which was founded by the Belgian director Yvan Le Moine after his movie The Red Dwarf won the IFF Bratislava's first year in 1999.

The festival's other four large-format movies screened at IMAX include the successful Everest, the true story of an expedition climbing the world's highest peak. Pulse, A STOMP Odyssey is a colourful celebration of the various cultures, rhythms, and sounds on the planet. The Living Sea was nominated for an Oscar for the best documentary, and Rock Live will feature music stars such as Sting, Carlos Santana, B.B. King, and Sheryl Crow.

"The number [of movies shown in IMAX] is not as high as the number of films visitors will see in Aupark, but [the films are] as significant," said Rastislav Kuttner, the manager of the Large-format Film section.

The winner of the Best Director Award at the 38th IFF in Karlovy Vary, and the candidate for the European Film Academy Awards, this tragicomedy will be screened in the IFF Bratislava's European Film section.

Starring Giovanna Mezzogiorno and the late, great Massimo Girotti, the movie tells the story of Giovanna, a woman who hasn't reached thirty but has already endured several years of a somewhat "tired" marriage to Filippo. She divides her time between a tedious job, two small kids, and extra work as a baker for a local café. The only escape from her stress is the occasional nighttime observation of an attractive young man living in the apartment across from hers and daydreaming. An old man that Filippo brings home one evening disturbs Giovanna's stereotypical life. Her initial mistrust turns increasingly into fascination with this person swathed in a mystery whose layers she gradually begins to peel away. The strange life of the eighty-year-old David influences Giovanna's life more than she's prepared to admit.

Inspired by the song Pirate Jenny from Bertolt Brecht's The Beggar's Opera, von Trier's frequently discussed film, which was one of the highlights of this year's IFF Cannes even though it didn't win any awards, employs the stylisation so typical of the Brechtian theatre. The film's main character is played by Nicole Kidman.

The sleepy life of a former mining town, whose inhabitants face the hardships of The Great Depression of the 1930s, is stirred up by the dramatic arrival of a young stranger. Beautiful Grace is on the run from a group of gangsters. Tom Hanson, the first person she meets, offers her a safe place to hide. Since Tom is the local moral authority, all citizens agree to let Grace stay for a time if she'll work for them in exchange. At first, the timid townsfolk rarely use her services, but when it appears that Grace is wanted by the police, the locals grow bolder and begin to require more and more work in order to compensate for the risk they are taking. The young woman gradually gets to know the relative decency and honesty of these god-fearing people. But none of them has the faintest idea of the secret that lies behind her escape from the gangsters.

This tragicomic film, reminiscent of Jan Hřebejk's Pelíšky (Cosy Dens), evokes the atmosphere of communist times. Casting Daniel Bruhl in the role of the young man Alex, the film was awarded the Blue Angel for Best European Film at this year's Berlinale.

The movie is set in October 1989, East Germany, just a few days before the fall of the Berlin Wall. For Alex and his sister, life has already changed. Their mother has had a heart attack and fallen into a coma. When she comes out of it eight months later, Alex is overjoyed and relieved; but socialist Germany isn't what it used to be. Alex is warned by the doctors that any sudden shock or emotional disturbance could be fatal for his mother's weak heart, so he decides to hide from her the fact that capitalism now reigns in her beloved East Germany. He insists on everyone pretending that nothing has changed, getting himself into more and more absurd situations.

The film will be shown in the festival's Off the Mainstream section, which offers a view of the newest trends in cinema.

The movie takes place in 1996 during the first war in Chechnya. A psychiatric clinic is located directly on the front line. It is alternatively taken over by Russian and guerrilla Chechnyan troops. Their commanders know each other from the Afghanistan war, where they fought together. The madhouse, with its staff long gone, is located in the middle of it all. The patients do not understand as they watch the absurd reality around them. They start to look like the only normal ones in a reality gone wild. The Canadian rock singer Bryan Adams is a remarkably funny character in this film, imagined by one of the mentally disabled girls.

The French director has successfully cast Charlotte Rampling in the role of a mature intellectual for the second time. The IFF Bratislava previously screened Ozon's films Sitcom, Under the Sand, and 8 Women.

Sarah Morton, a successful, English writer of detective stories, takes her publisher up on her offer to use her French country house in order to rest and recover her strength for her new book. In the beginning, it seems that she may find the necessary peace and harmony there. But one night, Julie, the publisher's daughter, of whom Sarah has never heard before, turns up. The girl's loose manners begin to irritate the writer and tension between the aging beauty and young girl develops into a female rivalry when a local playboy arrives on the scene. Open animosity threatens to break out until the consequences of Julie's reckless behaviour stir the writer's protective instincts and talent for solving criminal intrigues.