Art that really is a piece of cake

FRUITCAKES with whipped cream painted on canvas in rich, juicy colours call for a bite. A portrait of Vincent van Gogh resembles the face of German tennis star Boris Becker. Purple Milka-chocolate cows grazing with buffalo that can be found painted inside the French cave of Lascaux entertain with their Altamira-cave-referencing title: AltaMilka. 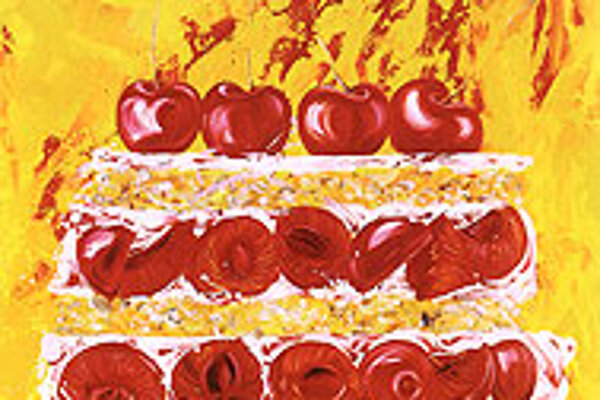 Font size:A-|A+  Comments disabled
FRUITCAKES with whipped cream painted on canvas in rich, juicy colours call for a bite. A portrait of Vincent van Gogh resembles the face of German tennis star Boris Becker. Purple Milka-chocolate cows grazing with buffalo that can be found painted inside the French cave of Lascaux entertain with their Altamira-cave-referencing title: AltaMilka.

Art on the verge of kitsch, though it does not slip over it. You either like it, or you don't - just as with whipped cream on a cake, though this time also in a frame.

Whipped Cream in Frame is an exhibition of shiny-coloured and large-scale paintings currently running at the Slovenský plynárenský priemysel (SPP) Gallery in Bratislava. It offers 28 works created by Dan Meluzin, a young, provocatively unique Slovak painter inspired by pop art, the movement developed by artists such as Andy Warhol and Peter Blake in the 1950s and 1960s that used images from advertisements, consumer products, and television.

"The theme of the whole exhibition is the scent of whipped cream. It's based on the fruitcake with whipped cream [paintings] that predominate over the display," said Ivan Melicherčík, the exhibition's curator.

The paintings even inspired the organisers to cook a large cake, which they sprayed with dozens of tubes of whipped cream at the exhibition's opening at the beginning of January. They also brushed the backs of the numerous "fruity" paintings with strawberry and cherry essences, so that the entire room has the scent of fruit.

"I am inclined towards banal things, such as rose flower, lipstick, chocolate, champagne," said Meluzin, who, as the art of consumerism dictates, creates large quantities of paintings on themes based on advertising, defiance, and enjoyment.

The roots of his works come from pop art, but he is not a pop art representative. "I'm of an absolutely different generation, so I couldn't be one," said the artist, who as a 14-year-old was inspired by the works of the American Robert Rauschenberg and the Englishman David Hockney.

Meluzin graduated from the Bratislava University of Fine Arts under the tutelage of Rudolf Sikora. He then studied in Pittsburgh, the hometown of Warhol, who is also among his influences, and Paris, where, according to Melicherčík, his work gained a certain European tincture.

"Meluzin's work is provocative and courageous. It knows no borders," said Melicherčík.

This is not only true of his paintings; the artist himself is original and strange. He wears yellow shirts, yellow ties, yellow suspenders, and yellow handkerchiefs. He is of French origin and believes that if this were not the case, he would never have created his 25 large paintings of French champagne.

"Meluzin is a weirdo obsessed with the colour yellow. He looks like an alien from an unknown planet. I suspect that his works will slip into kitsch, but he somehow agrees with this; it even seems he creates with this notion in mind," Melicherčík said.

"I love kitsch paintings but my works are not kitsch. They cannot be; kitsch is something different," said the artist.