DUŠAN Hanák started to make feature films after the Soviets invaded Czechoslovakia in August 1968. Most of them were banned from screening immediately after their completion. However, when the communist regime fell in 1989, the director's works won acclaim and awards at various international festivals.
At the start of this year, Hanák was one of four recipients of the state's highest award, the Pribina Cross First Class. 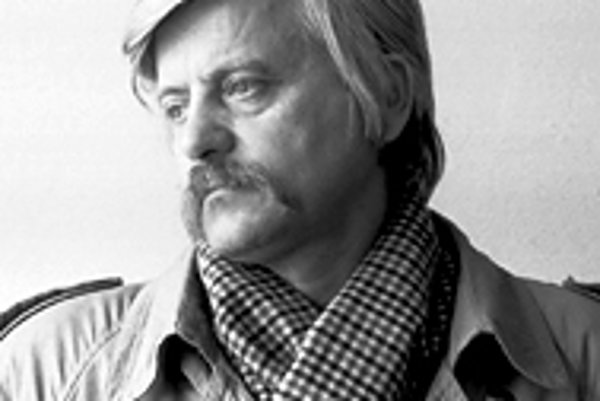 DUŠAN Hanák started to make feature films after the Soviets invaded Czechoslovakia in August 1968. Most of them were banned from screening immediately after their completion. However, when the communist regime fell in 1989, the director's works won acclaim and awards at various international festivals.

At the start of this year, Hanák was one of four recipients of the state's highest award, the Pribina Cross First Class. President Rudolf Schuster praised this prominent filmmaker for his contribution to the cultural development of the country.

In an interview with The Slovak Spectator, Hanák talked about the communist past and the reasons he did not leave the country.

The Slovak Spectator (TSS): When you started filming feature movies after 1968, most of them were forbidden by the state. Now the state has awarded you its highest honour. What does this mean to you?

Dušan Hanák (DH): When you are being awarded, it is more pleasant than if you were sitting in a dentist's chair. I appreciate the people who justified [the award] in connection with the development of modern Slovak culture.

My generation grew up with the notion that film is [an integral] part of culture and not only entertainment and a commercial activity. Today's generation of young filmmakers should also develop the spiritual, moral, and artistic values of Slovak and world cinema.

TSS: What was it like making movies during communism when you often didn't know whether they would make it to the screen? What was the force that drove you to make such films?

DH: I finished my feature debut, 322, one year after the Soviet occupation. The cultural politics of the state changed and a copy of the film was secretly carried over the borders by Ms Vailland, the director of the festival in Mannheim, which at that time was considered the most prestigious event by young filmmakers from all around the world. My film won the Grand Prize there.

Another motivation was the creative expansion of the 1960s. It was a lesson one couldn't forget: searching for truth, even though it collided with the totalitarian ideology.

TSS: Your films, such as The Pictures of the Old World, and I Love, You Love, depict people living their own lives seemingly beyond the reach of communist ideology. Why were you interested in such themes?

DH: It was the people who preserved their feelings of inner freedom and didn't lose their own identity that interested me. It's a problem for all people, but the conflict between an individual and [those in] power is latent in all my films.

During the period of normalisation [after the 1968 Soviet occupation] the freest were those who lived outside the structures and on the margin of society. Obviously, it was impossible to talk about dissidents in the films but in the former regime the "enemy" was everybody who was free inside and independent. That's why my films 322, The Pictures of the Old World, and I Love, You Love were prohibited. The people on the edge of society were authentic, faked nothing, and had a rich inner life.

TSS: What did the state expect from you as a filmmaker?

DH: When your film was banned, you were prohibited from working for two to three years - your films and projects would be rejected. Later, they would offer you scripts with which you could not identify. They wanted every movie to be a well-arranged shop-window of socialism. It was distanced from life; [realistically depicted] men completely disappeared from documentary films of that period, as well.

The biggest danger was the [communist regime's] demanded schematic and the interrupted continuity in the creative process. I had many projects that were tied to actual themes, actual people, and actual surroundings, but it was impossible to bring them into film or television.

In the middle of the 1970s I made the film Rose Dreams, which contained motifs from life in a gypsy settlement. I went to visit London when it was screened there. At that time, I had a chance to visit the film studios in Pinewood, which gaped with emptiness. After the famous period of 'angry young men' [epitomized by James Dean and Marlon Brando], English filmmakers had problems coming up with original ideas, much like the situation in Slovakia today. I was sitting in an editing room with a young director and there was a picture of a man with a turban travelling through clouds on a flying carpet. Later, in a buffet, I asked the director if he was also going to prepare a film about the lives of ordinary people. In a lowered voice he told me that his producer thought it would not interest anyone.

TSS: To what extent do your films reflect your own experiences, your feelings?

DH: I am interested in the space between documentary and fiction. I don't trust scripts that are created with no live contact with reality. There is a certain mysterious connection between my inner themes and reality, which is full of authentic impulses and motifs. [All I need] is to remember them and put them into new contexts. Then the fiction, fabulation, and material create a new reality out of life. It is not reporting reality; it is a picture of life the way I see it.

TSS: It wasn't until Paper Heads, the film that originated six years after the fall of the previous regime, that you were able to openly talk about the basis of the system that challenged your right to work freely. How satisfying is this film for you?

DH: Each film that endures the test of time and can be understood by viewers is a satisfaction. This film was a Slovak-French-Swiss-Czech co-production and its theme is the relationship between a citizen and totalitarian power.

Viewers reacted powerfully to this film in various countries. At the festivals in San Francisco and Yamagata [Japan] it received main prizes. The chairman of the jury in Japan told me that the film was not only about communism. The theme of the paper heads, the official representatives of the system, could also be understood universally, if such paper heads isolate themselves and act against the interests of citizens. I was also convinced of that after showing the film in the Slovak parliament during [ex-PM] Vladimír Mečiar's reign.

TSS: Do you regret not leaving the country after the occupation - like Miloš Forman did, for example? What made you stay?

DH: I didn't want to burn all my bridges. I had my friends here and a feeling of fellowship with the people who lived here. I didn't want to emigrate primarily to have the opportunity to make commercial films. My wife is Norwegian; I could have left at any time. It's true that in the 1980s it was impossible to breathe here.

TSS: Your films have won significant prizes at many international festivals such as those in Berlin, Paris, San Remo, Montreal, Los Angeles, and Denver. After the fall of the regime, several Western countries held retrospectives of your work. Did you ever believe that such a period would come?

DH: At the beginning of the 1980s, I read a samizdat by a Russian author who predicted the collapse of the Soviet Empire. It was not easy to believe that after living all your life on this side of the Iron Curtain. The propaganda kept repeating the slogans about our eternal friendship with the Soviet Union. I think the only ones prepared for such a radical change were the communists.

After my film The Pictures of the Old World was shown at the end of the Cinema du reel festival in Paris, all the people in the hall stood up and the ovation went on for a long time. It was a year before the regime's fall. Retrospectives of my films at the Museum of Modern Art in New York and in other American towns were also successful. People were coming to m. They wanted to talk about the films; they felt [the films] were directly addressing them.

TSS: Currently, you are a professor at the Film and Television Faculty of the University of Performing and Drama Arts in Bratislava. Why don't you make any more films?

DH: To be a film director is a risky job. I've always been a maximalist. Until recently, when a person in this part of the world wanted to make a good chair or a good film, he had to put much more energy and effort into this work than he would have had to anywhere else. That person had to overcome the resistance of his surroundings and often ended up causing himself problems, such as harming his health. There are talented young filmmakers, and the future of Slovak cinema is in their hands. I can be helpful in their search, or influence them. I think we are useful to each other.