"I HAVE always worked with a theme that provokes me and interests me, one which I need to grasp for myself in all its complexity," said young photographer Lucia Nimcová, who has devoted herself to the theme "women" for several years.
Starting with self-portraits, she later dashed out with her camera to take "diary notes of her surroundings". And since 2000 she has been capturing the complexity of women she considers exceptional in their natural, private environment. 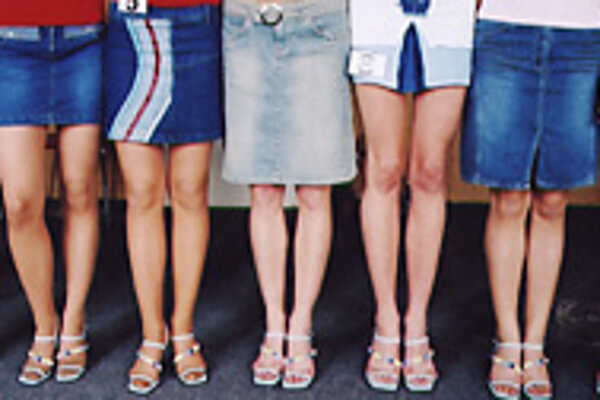 Font size:A-|A+  Comments disabled
"I HAVE always worked with a theme that provokes me and interests me, one which I need to grasp for myself in all its complexity," said young photographer Lucia Nimcová, who has devoted herself to the theme "women" for several years.

Starting with self-portraits, she later dashed out with her camera to take "diary notes of her surroundings". And since 2000 she has been capturing the complexity of women she considers exceptional in their natural, private environment.

"At the same time, I had to cope with being a woman myself," she said.

Nimcová's subjective and complex view on the everyday woman caught the eye of the Institute for Public Affairs (IVO) think tank. At the beginning of last year they offered her the grant that enabled her to continue working on this theme, while simultaneously creating a series of documentary photographs for the publication Slovakia 003 - A Pictorial Report on the State of the Country. The publication accompanies the institute's annual Global Report on the State of the Country.

Miroslav Kollár, the IVO's programme director, said that Nimcová got the attention of the grant's jury through her existing works and the project proposal she submitted.

"It differed from the majority of the proposals the grant committee has seen - not only in theme but also in the way she proposed to handle it," he said, adding that the theme gelled with the institute's intention to more closely explore gender issues in the near future.

The IVO has been issuing its annual global reports for almost a decade, but only in 2001 did they start to accompany the analytical text with a more subjective, pictorial section. One of the initiators of the project was the renowned Slovak documentary photographer Andrej Bán, and consequently the project aims to create a space for the support of talented young Slovak photographers.

The photographer of the first pictorial report, Martin Kollár, pioneered the project's concept of moving away from shooting celebrities and extremes to focus on ordinary people in their given time and environment. A year later, Jozef Ondzik worked on the theme From Village to Town. The institute's most recent pictorial report, Nimcová's series, offers a comprehensive photographic testimony of the state of women in Slovak society.

"[In her photographs] she discovers the world of a woman mainly through her own experience, through banal stories of surroundings, objects, and their implications. At the same time she is also interested in what is maybe only a fictive contrast [between] the women nostalgically swimming in the old [Socialist] structures and the women trying to face the attack of the 'Barbie' world of advertisement and modeling, by which they are manipulated, even tyrannized," said Kollár.

Travelling throughout Slovakia and shooting loads of film from March to September of 2003, Nimcová kept returning to places that caught her attention. She comes from Humenné, so most of the pictures originated in the country's east, the region she knows best.

"Just as Martin Kollár in the project's first year, Nimcová exceeded our expectations," said Kollár. "According to experts and visitors to the exhibitions organised during the Month of Photography, Nimcová's presentation [of the IVO's series] was one of the most noteworthy projects of the event."

Even though Nimcová's report offers an explicit look at the "Slovak woman", the photographer says she does not think her testimony is only about women.

"It is about the everyday life of half of the population, meaning it is about people and for people."

LUCIA NIMCOVÁ was born in the eastern Slovak town of Humenné in 1977. She graduated from the Institute of Creative Photography of the Slezká University in Opava, Czech Republic, in 2003. She has participated in many collective photographic exhibitions and since 2000 has also had her work displayed by itself. Her works have been exhibited in Poland, Italy, Finland, Ukraine, Austria, Canada, and Germany.

Last year Nimcová won the Artists in Residence grant issued by Vienna's KulturKontakt and she currently can be seen taking pictures of Viennese balls, everyday Viennese life, and things that characterise Vienna's typical citizens. She will present the results of this project on March 18 in Vienna, as well as on her website, www.luco.sk.