THE ŠARIŠ Gallery in the eastern Slovak town of Prešov was just beginning to install its exhibition of Kovačica naive artists when the paintings drew the attention of a notable passer-by: presidential candidate Ivan Gašparovič. Not long after, the chairman of the Movement for Democracy was negotiating the purchase of a new painting.
"Mr Gašparovič already owns three paintings by the Kovačica naive painters," said Dagmar Skopárová from the Šariš Gallery. " 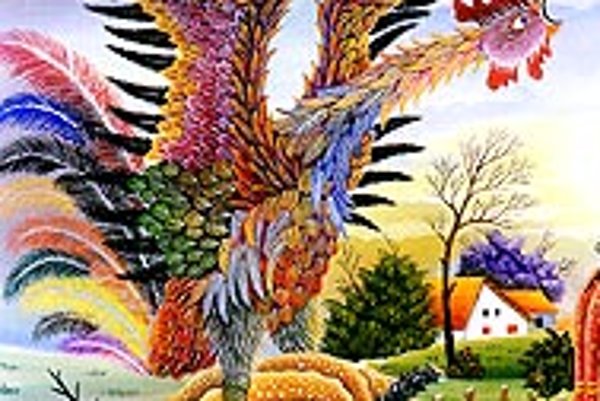 Font size:A-|A+0
THE ŠARIŠ Gallery in the eastern Slovak town of Prešov was just beginning to install its exhibition of Kovačica naive artists when the paintings drew the attention of a notable passer-by: presidential candidate Ivan Gašparovič. Not long after, the chairman of the Movement for Democracy was negotiating the purchase of a new painting.

"Mr Gašparovič already owns three paintings by the Kovačica naive painters," said Dagmar Skopárová from the Šariš Gallery. "Many [Slovak] state representatives interested in traditional art decorate their rooms with the art of Kovačica, which is known worldwide."

The gallery is exhibiting around 60 paintings of these self-educated artists of Slovak origin whose ancestors initially settled in the Yugoslavian town of Kovačica at the turn of the 18th and 19th centuries. For generations, they have preserved the folk traditions of their homeland, which they capture through their rich story-like pictures.

"The extremely colourful naive-style paintings recall children's works and fairy-tale illustrations. Admired by professional artists, they are a cute look at the world," said Skopárová. She added that, in addition to displaying the traditional paintings, the exhibition also shows works painted on glass by using a special technique.

Because of the difficult socio-economic situation and religious problems at the end of the 18th century, entire Slovak villages left the then-feudal state. Lured by promises of better living conditions and religious freedom, these people moved to the south of the Austro-Hungarian Empire, to what was called the Lower Land.

After several years of moving from place to place, some of them settled on the Yugoslavian border and, in 1802, founded the Kovačica settlement, which today is in Vojvodina, an autonomous part of Serbia and Montenegro that is some 50 kilometres from the Serbian capital, Belgrade.

There they formed a community that has kept alive the traditions they brought from home. Co-inhabited by Hungarians, Serbians, and Romanians, Kovačica is now a district town with 30,000 inhabitants, 14,000 of whom are Slovaks.

"Most of the families came [to Kovačica] from around the [eastern Slovak] town of Veľký Krtíš," said Ján Hrk, a Kovačica inhabitant and the curator of Prešov's exhibition. His family arrived from Ľuboreč, a village near Lučenec.

Kovačica is one of the most famous Slovak communities abroad. Most of its inhabitants still speak Slovak, wear traditional folk costumes, and celebrate typical folk events. They have captured these traditions in their pictures, which have travelled the world and can be found in the private collections of the Spanish King Juan Carlos, the Dutch Queen Julianna, Ronald Reagan, Francois Mitterand, Franco Nero, Alain Delon, the Rolling Stones, and many other celebrities, most of whom have visited the town.

The town has been growing for half a century thanks to its amateur painters. The basis of this tradition, though, can be traced back to the 1930s, when Martin Paluška and Ján Sokol started to paint without having any academic background in the field. In 1947 Vladimír Boboš, a professional artist, joined them and started to teach them painting technique. With more people, mainly farmers, joining them, they formed the first art class in the village in 1950 and the original focus gradually shifted from copying famous paintings from postcards to searching for individual ways of capturing surrounding events.

The birth of Kovačica naive art is believed to be 1952, when the artists held their first joint exhibition, in celebration of the 150th anniversary of the founding of the settlement. Three years later, they founded the Gallery of the Painting Farmers, which was renamed the Gallery of Naive Art in the 1980s. Thus far, over 40 artists have worked for the gallery. Nineteen of them are current members, but the actual number of people who paint in Kovačica reaches around 50.

"Kovačica naive art is a unique phenomenon in the world. The way of living, the [artists' Slovak] origin, and the [Kovačica] surroundings have created a distinctive means of artistic expression for these painters - in their selection of themes and in their choice of colours," said Hrk.

Visitors to Šariš Gallery have the opportunity to compare the works of the first, founding generation (mainly represented by Zuzana Chalupová and Martin Jonáš) with the works of the younger generations. Altogether, the gallery is exhibiting paintings by 20 living and deceased Kovačice artists.

The pictures on display narrate everyday stories of streets, farmyards, and homes. They show the locals at weddings, funerals, and births. They demonstrate that the older generations are firmly tied to their rural surroundings and traditions, and the younger generations are branching out and opening themselves up more to idyllic landscapes and the world of fantasy.

"The large presence [at the exhibition] of artists of the younger generation proves that Kovačica naive art continues and develops with each generation. And this continuity is assured not only in the number of painters but also in the aesthetic significance of these works," said Hrk.