THE SERBIAN Boban Markovic Orkestar will perform in Bratislava on April 3 with authentic Slovak Roma musicians from the Phurikane Giľa (Ancient Roma Songs) project. The concert takes place at the Aréna Theatre in the Petržalka district.
Both musical ensembles draw inspiration from traditional Roma music, but each adapts it differently. 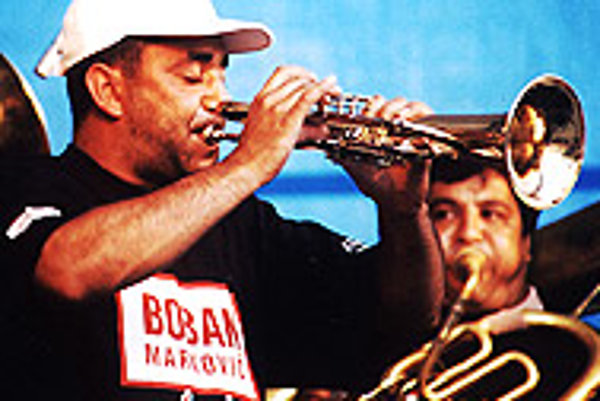 Font size:A-|A+  Comments disabled
THE SERBIAN Boban Markovic Orkestar will perform in Bratislava on April 3 with authentic Slovak Roma musicians from the Phurikane Giľa (Ancient Roma Songs) project. The concert takes place at the Aréna Theatre in the Petržalka district.

Both musical ensembles draw inspiration from traditional Roma music, but each adapts it differently. The two groups, one authentic and unknown and one stylistically altered and world-famous, first shared a Slovak stage last year at the country's largest music festival, Pohoda.

"[The concert] will offer two viewpoints on Roma music that are quite different, but in some aspects very similar," said the event's organiser, Michal Kaščák.

"The Balkan Roma music is more dynamic than that played by the Slovak Roma. But what is interesting is that Boban Markovic is a world music star, while the Phurikane Giľa musicians are ordinary people, collected from their settlements by a bus to play a concert and then brought back to their everyday lives. Considering the quality of what they play, though, it is very similar, equally comparable [to Markovic]," Kaščák said.

The 12-member Boban Markovic Orkestar has performed at significant European festivals, such as Budapest's Sziget, Prague's Respect Festival, Linz Festival in Austria, and the Lent Festival in Maribor, Slovenia. Its leader, Markovic, is considered the best Serbian trumpet player and, along with the second trumpeter, Jovica Ajdarevic, was given Serbia's prestigious Trumpet Maestro award. The band has also gained several significant awards.

The band plays traditional Roma brass music that incorporates various styles from around the world. Their music was first introduced to Western audiences, as was the case in Slovakia, through Emir Kusturica's films Underground and Arizona Dream. According to Kaščák, Markovic's orthodox fans do not have to fear any radical changes: The orchestra will bring its traditional repertoire, which includes classic Roma dances and the band's hits from Kusturica's films.

The concert's vibrant, rhythmic Balkan tunes will be juxtaposed with the slower, emotional ballads of the Slovak Roma musicians, who come from two eastern Slovak settlements - Petrová, and Markušovce.

These amateur musicians were put together through the Phurikane Giľa project, initiated by ethnographer Jana Belišová from the civic organisation Žudro. She and her team travelled around Roma settlements in Slovakia's east a couple of years ago and recorded traditional Roma songs in their authentic environment. In 2002 they were released on a CD, the success of which resulted in the invitation for the musicians to perform live.

Apart from last year's Pohoda, which the Boban Markovic Orkestar has played twice, the ensemble has visited Slovakia two other times. That is why Kaščák, who is also the Pohoda festival's organiser, decided to give space to other international Roma ensembles at this year's gig, on July 16 and 17 in Trenčín.

"The Romanian Roma brass ensemble Fanfare Ciocarlia, which is of the same calibre as the Boban Markovic Orkestar, has already promised to come. Another authentic Roma band should come from Serbia, the Earth Wheel Sky Band. And we will again welcome musicians from the Phurikane Giľa project," he said.

"The [impetus for this is] that, within this [Carpathian] region, the Roma bands are the strongest."

The concert by the Boban Markovic Orkestar and the Phurikane Giľa musicians will start at 19:00 on April 3. Tickets cost Sk390 and Sk490 (on the day of the concert). Divadlo Aréna (Aréna Theatre) is located at Viedenská cesta 10, on the right bank of Danube River. Tel: 02/6720-2550.