AFTER fiery debates between the ruling coalition and opposition parties, the fate of the Lisbon Treaty remains in limbo. Though the parties met on February 6 to iron out discrepancies between the two camps, Speaker of Parliament Pavol Paška finally postponed the vote to an unspecified future date. 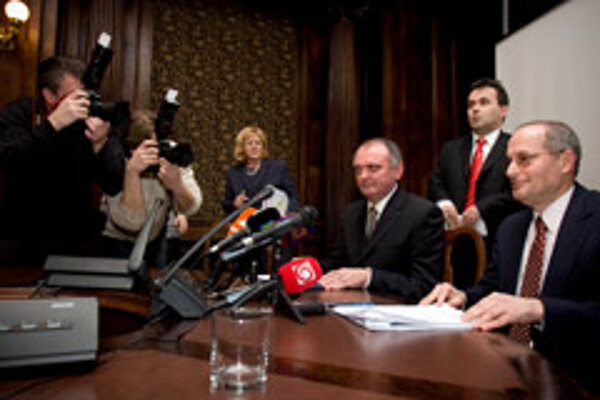 AFTER fiery debates between the ruling coalition and opposition parties, the fate of the Lisbon Treaty remains in limbo. Though the parties met on February 6 to iron out discrepancies between the two camps, Speaker of Parliament Pavol Paška finally postponed the vote to an unspecified future date.

"We have failed to come to an agreement because an agreement always needs partners," Paška told media after the session. "I regret that Mr. Dzurinda has continued in his blackmail, but we've gotten used to it."

However, Slovak Christian and Democratic Union (SDKÚ) chairman Mikuláš Dzurinda denied that the opposition was blackmailing anyone.

"We have a vision of a normal democratic press code, which will neither be a threat nor limit the freedom of speech for journalists, as is a minimal requirement for democracy," Dzurinda said.

However, observers say that the fact that the ruling coalition and opposition finally negotiated was a partial success.

The ratification process ground to a halt after the opposition, made up of the SDKÚ, the Hungarian Coalition Party (SMK) and the Christian Democratic Movement (KDH), agreed to support the treaty only under the condition that the ruling coalition withdraw the draft revision to the Press Act. The draft legislation has been showered with criticism by publishers, journalists and the European Organization for Security and Cooperation in Europe (OSCE), for what they called a restriction of the freedom of the press.

Meanwhile, Silvia Glendová, the Prime Minister's spokeswoman, said that the government would deal seriously with all the comments made by all international organisations pertaining to the draft press code.

Even deputy chairman of the European parliamentary faction of the Party of European Socialists (PES) Hannes Swoboda inquired during his February 5 visit to Bratislava about the state of the draft press code.

Despite the statements by Swoboda and Fico, the ruling coalition, which consists of Smer, the Movement for a Democratic Slovakia and the Slovak National Party, has not yet withdrawn the draft from parliament and discussions continue.

The opposition assumes that the vote over the Lisbon Treaty will be held in March after the OSCE recommendations are incorporated into the draft press code.

"If the recommendations of the OSCE and the international institutions are accepted the draft will take a form that is acceptable for us," Stanislav Janiš, chairman of the SDKÚ parliamentary club told the aktualne.sk news server on February 7.

OSCE Representative on Freedom of the Media Miklós Haraszti asked the Slovak government in late January to withdraw the bill from parliament and said that his office was ready to provide recommendations on how to improve it.

According to Haraszti, the draft contains sections that would severely restrict editorial autonomy, and would go against Slovakia's international commitments to protect the freedom of the press. Haraszti was critical of the draft's articles that give the government the power to impose sanctions on publishers and grants the 'right of reply' in a way that intrudes on editorial autonomy.

The bill also earned criticism for granting the government the authority to decide if any "information was published in ways that belittles, excuses, or approves the promotion of a long list of socially harmful behaviour." The OSCE also tagged the provision that obliges media to publish a response from any person or legal entity "if they were to find that a published 'statement of fact' negatively affected their honour or dignity, regardless of whether the 'statement of fact' was true or not."

Haraszti met with Maďarič on February 7, however, the culture minister did not manage to soften the OSCE representative's criticism of the press code and thus Haraszti maintains his objections.

However, State Secretary of the Culture Ministry Ivan Sečík said that the ministry would consider relevant recommendations from the OSCE. President of the Institute for Public Affairs Grigorij Mesežnikov said that the attitude of the opposition is simply a culmination of the abnormal conditions that have been ruling in parliament since June 2006.

Mesežnikov told The Slovak Spectator that he understands the opposition's attitude, which conditioned the ratification of a treaty of European significance on changes to a legislation that impacts only Slovakia.

"The opposition has been completely marginalised," Mesežnikov said. "However, suddenly in association with the Lisbon agreement the opposition parties realized that they can influence the situation in parliament."

Political scientist László Öllős said he is certain that the opposition could not give up its demands. Even if the ruling coalition promises that the demanded changes to the press code would be made after the ratification of the Lisbon Treaty, the opposition would not yield.

"In Slovakia you automatically assume that the government will not keep its word," Öllős said. "Similar promises will simply not be kept in Slovakia if the opposition will have no way to force the ruling coalition to change the draft revision to the press code."

However, Mesežnikov also said that there should be no worry that the parliament would not ratify the Lisbon Treaty since the opposition parties declared from the very beginning that they would support it.